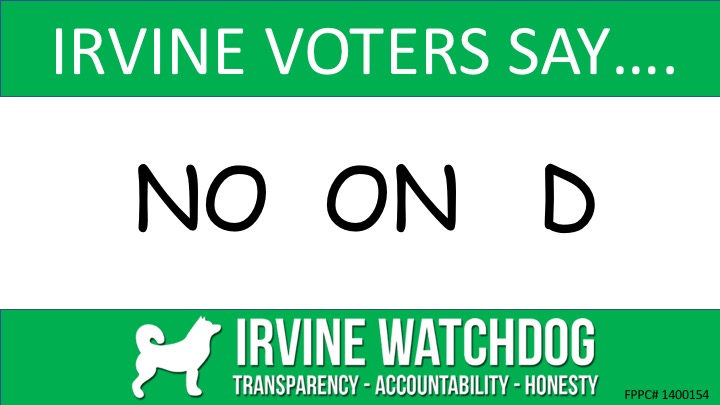 In my opinion, Irvine’s “Measure D” is a shockingly undemocratic measure. This measure prevents citizens from having a voice in future development plans within the City of Irvine. The measure is described as something that prevents any actions that might “…delay important revenue streams from development projects which provide a fiscal benefit to Irvine citizens”. This language is an insult to the intelligence of any citizen that takes the time to read and understand the measure. What the measure really does is prevent the public from blocking development that citizens believe is against their interests.

Measure D is cloaked in a veil of fiscal responsibility. Read it carefully. It says that the right to referendum (the ability of citizens to decide by a vote) on future developments in which the developer pays 15% more than the cost of the development to the city are not subject to voter referendum. This means that if the (subjective) numbers can be made to look good by the developer on the front end of a development and are approved by the city, citizens have no say and they cannot and will not be allowed to vote against the planned development.

Whether you are for or against Measure B, Measure B is on the ballot because enough residents disagreed with the veteran’s cemetery land swap that they signed a petition to put the matter on the ballot for voters to decide. If Measure D passes, there can NEVER be another Measure B. The proponents of Measure D say that if you don’t like the development plans the city council approves you should vote them out of office. This is fine except that you can’t un-build poorly conceived development projects after the fact.

It isn’t easy to put a voter referendum on the ballot.  It is extremely rare, almost unheard of.  It’s not as though there will be a vote of the public on every development decision the city makes.  The right to bring a referendum is, and always has been, in the city charter for a reason.  It is part of the democratic checks and balances built into the rules governing our city to ensure the public has a voice…an emergency override if you will.  I am not willing to give up that democratic right.  Are you?

Due to the misleading description of the measure itself and the fact that the language in the so-called “Impartial Analysis” written by the City Attorney is confusing, misleading and contradictory, I believe this is the most egregiously deceptive and corrupt measure ever proposed in the City of Irvine. I went to public school in Irvine and raised my children here. I urge everyone who cares about democracy and wants to maintain the rights of Irvine citizens to have a voice in major development plans within our city to vote NO on Measure D.

James is a long time Irvine resident. He attended Irvine public schools and has raised his family in Irvine.

VOTER ALERT: Irvine Watchdog urges you to vote NO on D