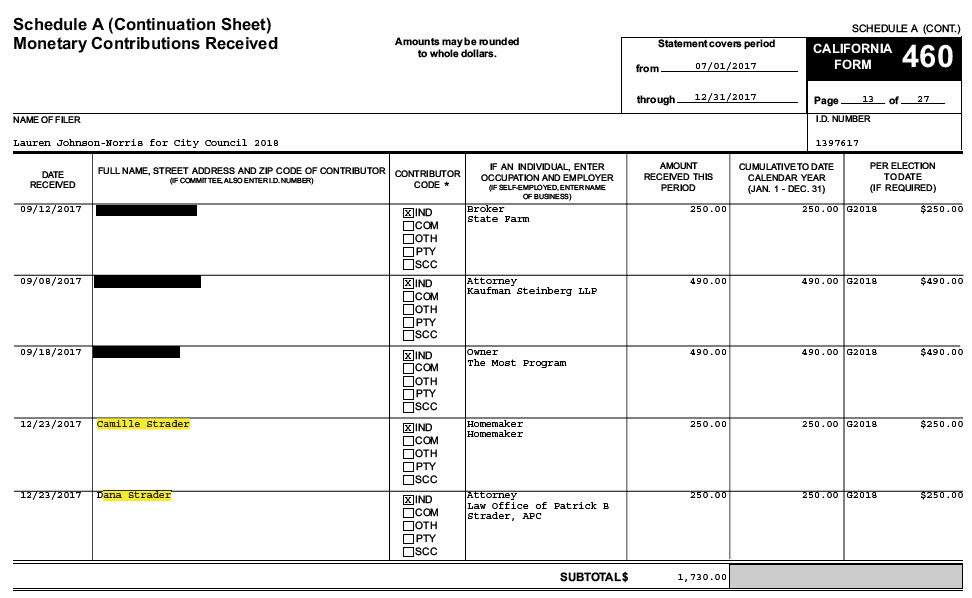 On August 20, 2018, I attended the Democratic Party of Orange County’s endorsement meeting. Unexpectedly, I was given a minute to speak before the Central Committee cast their votes to endorse two of the three democrats running for Irvine City Council: Farrah Khan, Kev Abazajian, and Lauren Johnson-Norris.

My message was clear:  We have two candidates who have vowed not to accept any form of developer money, special interest, or corporate-PAC money and one candidate who has accepted developer money. Someone in the audience asked who that candidate was. I answered, “Lauren Johnson-Norris”.

On Johnson-Norris’ 460 forms, you will see multiple contributions from the Strader family (max contribution amount per person is $490). Patrick Strader is the lobbyist/attorney for the developer FivePoint/Starpointe Ventures.

After I spoke, Johnson-Norris took the mic and boldly stated, “I have not accepted any money from any developer.” Did Johnson-Norris lie? Technically, no, because the contributions listed were not from “FivePoint” but from FivePoint’s lobbyist. But is it developer money? Absolutely. Did she intentionally mislead everybody? Yes.

This was not the first time Johnson-Norris has provided misleading answers when asked about accepting developer money. Here is a thread from April 2018 between me and Johnson-Norris where she dodged my question as to whether or not the Strader family represented FivePoint:

Here’s the audio of Carina Pantone’s vote for Johnson-Norris:

And here’s the audio of her husband, James Pantone’s vote for Johnson-Norris:

Johnson-Norris’ close ties to FivePoint’s lobbyist is a conflict and problem that we cannot afford to have in our city. And her willingness to mislead voters deems her untrustworthy.

Let’s help clean up our city and vote in two council members who have absolutely no ties to the major developers so we can place some much needed checks and balances against them. We need a city council that will put residents first and one way to do that is to ensure we do not vote for those who, either directly or indirectly, receive developer money. And in case it wasn’t clear, “developer money” includes developer lobbyist money.