Why Change the Protocol Now? 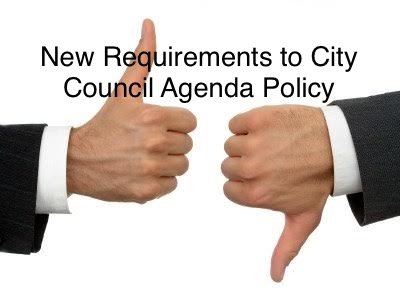 In a memo addressed to City Manager, John Russo, Mayor Christina Shea and Councilmember Mike Carroll want to change the protocol for City Council initiated agenda items. It bears notice that both were appointed to their recent positions, not elected like the rest of the council.

The new proposal is to require “(i) at least two members of the City Council, or (ii) the Mayor” to sign off on requesting any item to be placed on the agenda.

Why give the Mayor greater authority than the Councilmembers?
Under the City Manager form of government, the mayor is a ceremonial position and thus all five of the councilmembers are equal with regards to their power and authority. Members do not represent districts or pockets of the city — they individually serve all the residents. Why should the mayor have the sole power to place items on the agenda when his/her fellow councilmembers do not?