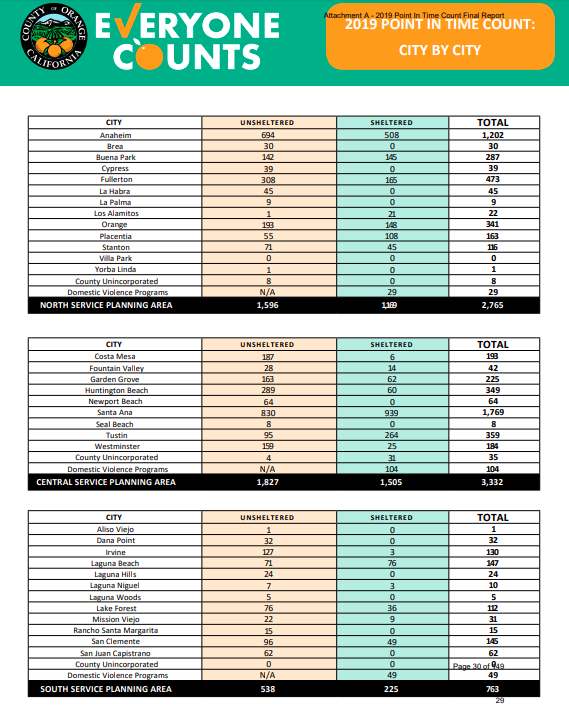 There are more people experiencing homelessness in Orange County than two years ago. This and other valuable information is found in the final report (7/2019) released by the Orange County January 2019 Point-in-Time count.


The Point-in-Time count (an actual headcount & survey) is a national mandate from the U.S. Department of Housing and Urban Development (HUD), intended to count the number of homeless people at a given point in time in a geographic region. This rich data lets the community better understand the nature and extent of homelessness and the characteristics of the homeless population. Key findings for the County show 2,899 homeless people in shelters, and 3,961 homeless people unsheltered on the streets, in cars, or elsewhere in Orange County. [VOC| Nick Gerda]

In South County, the Sheriff’s Department will not enforce anti-camping laws until shelter is made available in South County cities. Irvine and Laguna Beach have their own police department and are not subject to the settlement. The Board of Supervisors is working with the South OC cities to get shelters. [VOC| Nick Gerda]

South County cities are involved in a separate homeless lawsuit. On Monday (8/12) a federal judge in Los Angeles County ruled to drop Irvine and three other cities from the lawsuit because the judge ruled that those cites had been “misjoined” in a single legal action. Homeless advocacy groups may go back and amend their complaints.  [OC Register| Walker]

The issue still remains – is South County providing enough homeless services and shelters in their cities to help the homeless people?  Irvine was dropped from the pending litigation but the need for action remains.

Irvine Is Required to Help Meet The State’s Low Income Housing Needs. What Is Irvine’s Share?