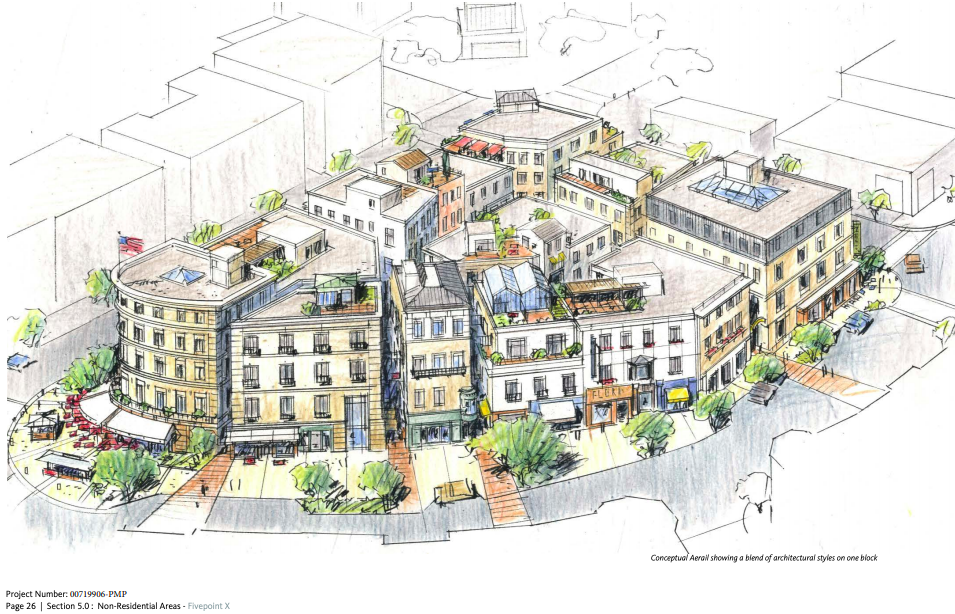 In related news, on October 22, 2019, the City Council approved (4-0 with Fox absent) the funding, design and construction for two OC Great Park attractions – a USA Water Polo Center, a Fieldhouse Sports Facility for super regional volleyball and basketball tournaments, and a parking structure. This City development project will be adjacent to the FivePoint X mixed-use commercial project that includes two hotel properties.

On October 17, 2019, the Planning Commission approved (5-0) FivePoint X – FivePoint’s hotel and commercial center which has, according to Commissioner Greg Smith, a unique design created specifically for the purpose of supporting the Great Park and will make the Great Park a “National Amenity”.

The Center is located near the ice rink and athletic fields and is to contain 2 hotels. The 180 room extended stay hotel will be located on the upper floors of 25 buildings with restaurants, entertainment, boutique groceries and other commercial venues on the lower floor. There will be outdoor dining and plenty of room for tourists and residents to mingle and hang out.

The renderings depict a European style concept with narrow streets and active pedestrian street-scape. No big box grocery store but instead boutique style food shops. The complex will have warehouses to serve as site distribution centers and a Central Trash Terminal where collected trash will be collected and stored. As more detailed plans for the venues are developed, the plans will be returned to the Planning Commission for discussion and approval.

A resident of the Great Park Neighborhoods reported that he was pleased to have the Commercial Center in his neighborhood and welcomed the project. He reported that FivePoint has been working with local residents to develop small commercial venues for residents to locate their startup businesses.

Two residents from Cypress Village were opposed to having the Central Trash Terminal on the periphery of the Center adjacent to their residential community.

Another resident complained that the FivePoint X Center and other projects are not providing the amenities that he believed his neighborhood village would have when he purchased his home.

The Planning Commission is very excited to see what the applicant is promising.