The Numbers by ZIP: Irvine Households With Kids and Without Kids 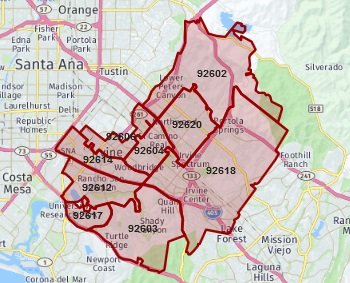 Most of us realize that households today can take many different forms. For example, households might include related individuals (families) living together, such as married couples with children, single parents with children, and married couples without children living in the home. However, household might also include unrelated individuals living together, such as singles living alone or with other unrelated singles.*

In spite of this, the term household is often used as a synonym for family, and family is used as a shortcut way of saying a household with children. This is true in Irvine, a city that prides itself on being family friendly. But how many Irvine households actually do contain children? The answer surprised me and might surprise you also.

Note: The source of the following numbers is UnitedStatesZipcodes. Although the site has a copyright date of 2020, Irvine’s recent development and fast changing conditions might make some of the data out-of-date. However, these numbers still give us insight into some Irvine demographics. UnitedStatesZipCodes.org lists the following as source of their data–United States Postal Service, U.S. Census Bureau, Yahoo, Google, FedEx, and UPS.

Also, the following lists of Irvine neighborhoods associated with each ZIP code are extensive but not necessarily exhaustive.

The Irvine Numbers by ZIP Code: Households with Kids and without Kids

92602–includes all or part of Northpark, Orchard Hills. Average household size is 3.

92606–includes all or part of Walnut, Westpark. Average household size is 3.

92614–includes all or part of IBC, Westpark, Woodbridge. Average household size is 3.

92617–includes all or part of University Hill, UCI. Average household size is 3.

Irvine Numbers are the Norm, Not Exception

These numbers make it clear that significantly more Irvine households do not contain children than do. Lest you think that this is particular to Irvine, here are some other numbers:

What does the fact that a substantial amount of Irvine households do not include children mean for Irvine? I will let you draw your own conclusions. Feel free to share your thoughts in the comments.

Sidenote: Approximately, 50% of Irvine’s population is renters. The situation is similar for much of the rest of southern California: “The dream of homeownership is slipping away for residents in many Southland cities as renters increasingly outnumber those who own homes.” (Source: The OCR, “Renters outnumber homeowners in some Southern California cities”; February 13, 2018)

*”A household is composed of one or more people who occupy a housing unit. Not all households contain families. Under the U.S. Census Bureau definition,  family households consist of two or more individuals who are related by birth, marriage, or adoption, although they also may include other unrelated people.  Nonfamily households consist of people who live alone or who share their residence with unrelated individuals.” (Source: Population Reference Bureau, “What’s a Household? What’s a Family?”)