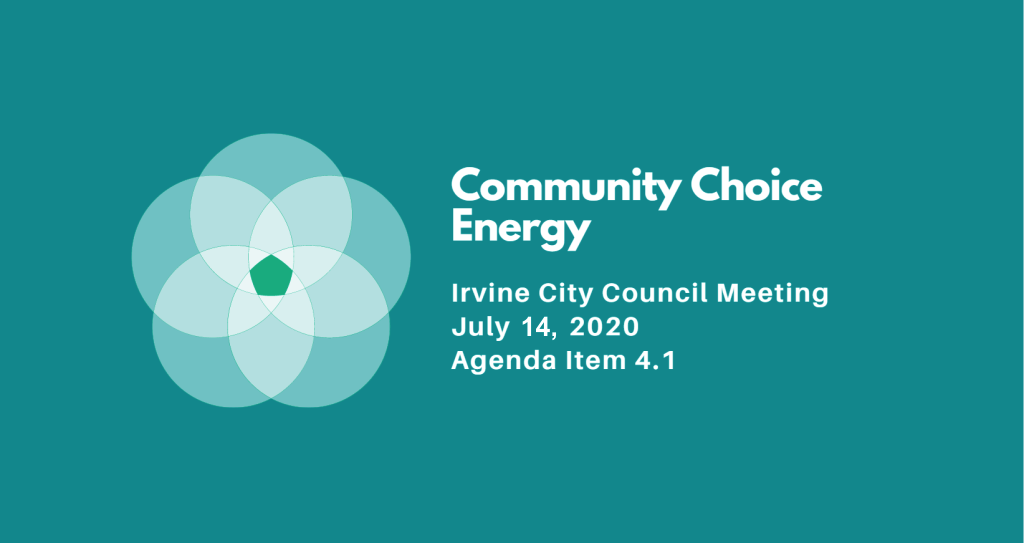 Community Choice Energy (CCE) is a program that offers residents an alternative choice for electric energy sources while seeking to bring local control and competition into the electricity marketplace. The City of Irvine approved an initial CCE Feasibility Study and Technical Assessment (Feasibility Study) that was completed on January 16, 2020 and the City Council ordered a follow up third-party peer review in March 2020. The Third Party Peer Review (Peer Review) was completed in June 2020 by MRW & Associates (MRW).

MRW found that a CCE program in Irvine could be financially viable, but also recommended “a more extensive and detailed pro forma analysis be required prior to implementation” if the City decided to pursue a CCE. MRW also stated that, given current conditions, Irvine and any partner agencies would “likely need to provide collateral funds to secure financing for the CCE.” Staff Report for Agenda Item 4.1.

The Peer Review reported that the feasibility study methodology was sound, but expressed caution over the financial risks for the CCE program. In particular, the Peer Review stated that the projected revenues, customer rate savings, and wholesale power costs savings may be less than anticipated as they are likely to vary over time due to variations in the power market.

According to the Peer Review, Irvine could establish an Irvine-only CCE and have sole control over the program, or it could create a Joint Power Authority (JPA) with one or more other cities with each city belonging to the CCE board and having shared authority. Currently, there are 21 CCE providers, serving more than 10 million customers in over 170 cities throughout California. CCE programs serve nearly half the retail load in PG&E territory, and are rapidly increasing in both SCE and SDG&E’s territory.

Should the City Council direct staff to proceed with a CCE, funds for program development and implementation would be required. The original Feasibility Study estimated this amount (which MRW found reasonable) at $10.05 million, of which $2.05 million are pre-launch expenses, which would need to be provided by the City/JPA; the remaining working capital cost of $8 million could be financed. Financing, as well as City/JPA provided funding, would be reimbursed by revenue generated by the CCE program over a period of three to five years.

How Will Our City Proceed?

On Tuesday, July 14, 2020, the City Council will discuss the Peer Review report and provide direction to city staff on how to proceed. The climate action community and Councilmembers Carroll, Fox, and Khan, have been vocal in their support of a CCE program in Irvine — continued support is anticipated this Tuesday. To submit an e-Comment on agenda item 4.1, please click here.

Branda Lin is an Irvine native and a founding member of Irvine Watchdog. Her passion is to promote civic engagement and empower residents on local Irvine issues. She has served as an Irvine Community Services Commissioner, Irvine Children Youth Families Advisory Committee member, and a driver for Irvine's Meals On Wheels program.