Opinion: An Overlooked Option in the Growth Debate 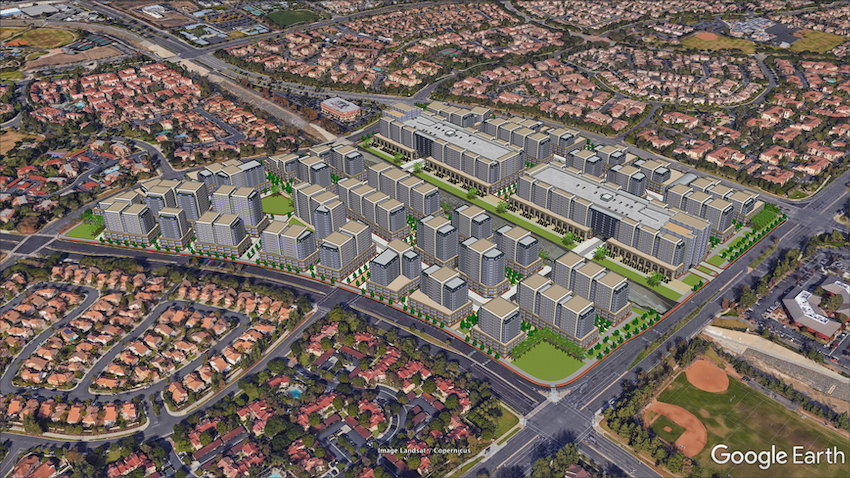 Large shopping centers can be redeveloped to create mixed-use districts where cars are unnecessary.

Way back in 1988, before Westpark Plaza was built, an Irvine teacher signing a slow-growth “Traffic Control” petition said, “I think we live in an area that is just becoming more and more crowded, and we have to preserve our quality of life.”

It’s a sentiment that still enjoys currency more than three decades later. Irvine continues to rank enviably on lists like “Best Places to Live,” but for many, its quality of life feels threatened. With the exception of a couple of much smaller towns, Irvine also ranks as the fastest-growing city in the state. Abundant wide-open fields, rare in the rest of the county in 1988, have been filled in with housing tracts and parking lots. As our landscapes lose their open space, so do our increasingly congested streets — judging by complaints about traffic.

Debates over how our cities and suburbs should grow are often framed as a binary choice: either continue in the conventional way, or do so more slowly. Slowing growth isn’t an option, given the housing shortage and related housing affordability issues, particularly severe in Orange County and in Irvine. What concerned citizens should be pushing for is not to slow growth, but to fast-track developments that facilitate car-free and car-lite lifestyles.

The city’s traditional practice of locating schools and retail near residential neighborhoods has been a good first step toward breaking the link between development and car traffic. The Irvine Business Complex (IBC) Vision Plan shows that the city recognizes it can go further, working toward a future of denser apartments located among workplaces and retail on Irvine’s west side. For now, further growth there is halted by a 15,000-unit cap, and the existing street layout is just one of the challenges toward making the IBC a truly walkable place.

Two shopping centers — Westpark Plaza and its neighbor across the creek, Crossroads — form an area of sixty-five acres, bounded by Barranca, Culver, Alton, and Paseo Westpark. As a student at Woodbridge High in the 1990s, I regularly rode by on Alton, and on the bike path along the creek. I remember the CD Listening Bar, and a restaurant called The Good Earth. More recently a student of architecture and urban planning, I’ve shown how these two shopping centers can be re-made into a car-free, mixed-use community of ten thousand residents, with benefits for public health, safety, and the environment.

“Walkable Westpark,” as I call this design, is meant to show that we have other options, with better outcomes. It’s an example of how we can bring people and their destinations together, for a greater sense of community, for the convenience of a short walk, for the simplicity of a more carefree life. Residents won’t need to remember where they parked, wait at red lights, or add to traffic.

Construction would happen in phases, over a number of years. Clearing land would be relatively easy, because half of it is simply covered in asphalt, and because all of it has a single owner: The Irvine Company (which has no connection to this proposal or its author). When complete, the new mixed-use neighborhood would have forty buildings, each with retail and other public uses on the ground floor, offices in the next two stories, and apartments and condos in the upper levels. The buildings are arranged on a grid of small blocks, making it easy for people to get around on the pedestrian-only streets, whose character can range from verdant parks to vibrant promenades.

With sixty-six percent more ground-floor space than the existing shopping centers, Walkable Westpark can continue to serve the surrounding community, as well as its own residents. Retail will be carefully managed to place businesses requiring convenient car access closest to the parking garages, and to ensure that the overall retail mix allows on-site residents to meet all their routine needs on foot. Two garages sit atop the four largest retail spaces, and are wrapped with buildings, concealing them from view. The garages provide sixty percent more parking spaces than the existing parking lots.

That may sound severely underparked by conventional standards, but few of Walkable Westpark’s residents will have their own cars. With workplaces, shopping, dining, entertainment, and even schools within walking distance — the site can be walked corner-to-corner in fifteen minutes — they won’t need cars. We can set up incentives to discourage car ownership, like charging residents profitable prices for parking spots, and programs to help ensure that people who work in Walkable Westpark also live there. When residents do need to drive off-site, they can take a car from a small shared fleet in the garages, paying as they use it.

Other features include two new bridges spanning the creek; building heights that step down to avoid casting shadows on properties across the street; loading docks next to the garage entrances, connected to every building by small underground tunnels to distribute packages and collect trash; and the creek, restored as a tranquil wildlife habitat, the centerpiece of the neighborhood’s many open spaces. Ultimately, we can imagine a subway system connecting this neighborhood to others like it all over the county, allowing everyone in the area the opportunity to reach a wide variety of destinations without cars.

Keeping ten thousand people off the roads can be done, but it will take thoughtful planning. As the largest planned community in the nation, Irvine can do this. It’s how the city can enjoy continued economic and population growth with minimal traffic impact and no loss of unspoiled land. It can save lives, by diverting new development away from fire-vulnerable areas at the city’s edges, by preventing traffic accidents, and by practically eliminating ten thousand drivers’ automotive emissions that contribute to southern California smog and global climate change.

Growth doesn’t have to mean more traffic. Done right and done well, growth can mean not only preserving our quality of life, but enhancing it.