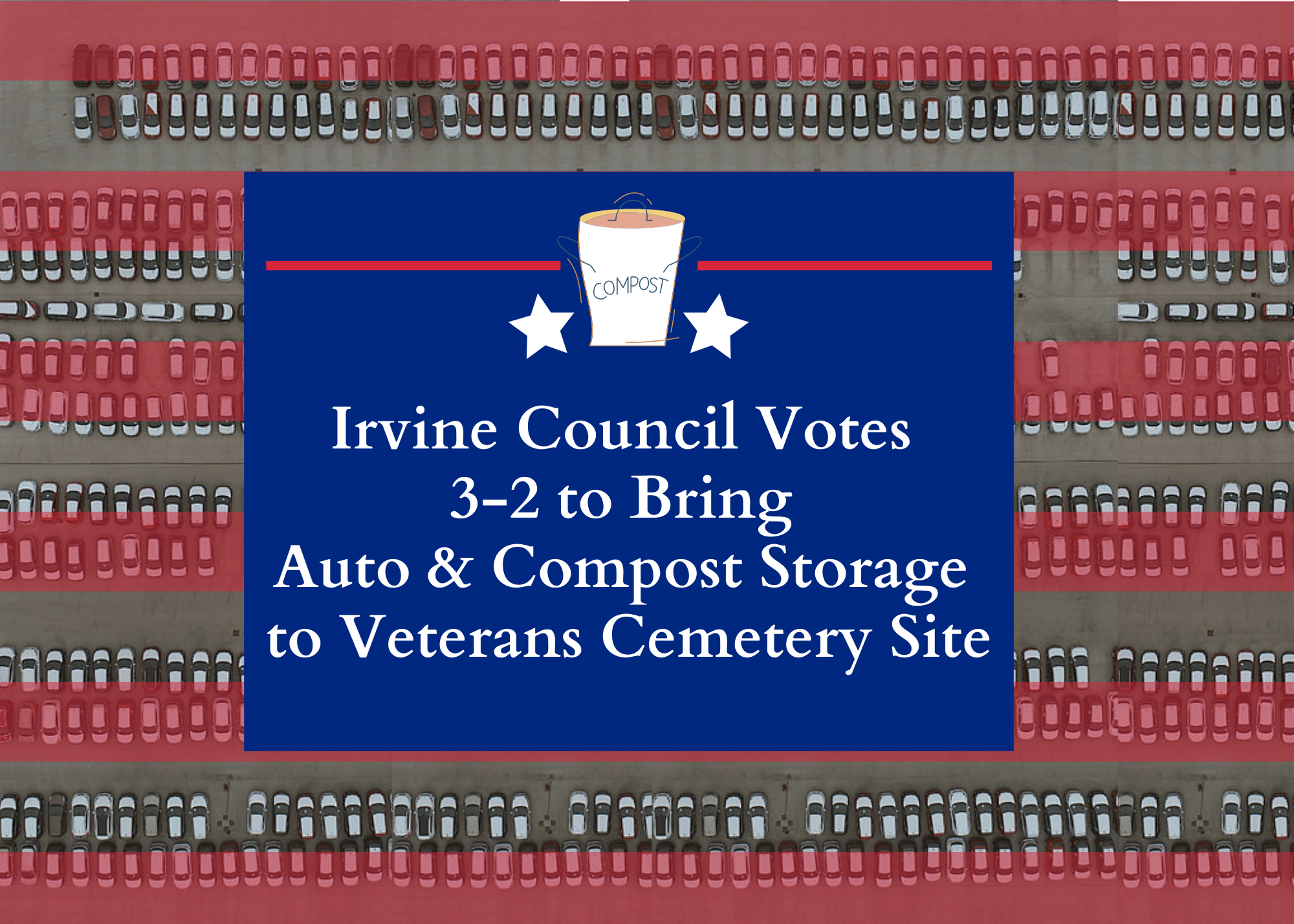 On Tuesday, October 27, the Irvine City Council voted 3-2 in favor of using a section of the former El Toro Marine Base designated as the site of a veteran’s cemetery for temporary auto, compost, and mulch storage.

At least one of the businesses that will benefit from the deal has donated to the political campaigns of the three council members who voted in favor — Carroll, Shea and Kuo.  Councilmembers Khan and Fox voted no.

Dozens of residents submitted public comments opposing the decision saying that the land should be used for the State Veterans Memorial Park and Cemetery without delay.

Among the public comments was a letter from  a law firm on behalf of Irvine resident Ed Pope and a group called Build the Great Park Veterans Cemetery, which asserts that the ARDA leases are inconsistent with zoning rules set in an initiative adopted by the council in May, which does not permit any vehicle storage.

Some residents also raised concerns that the council tried to hide the item from the public by placing it on the council agenda with routine consent calendar items that do not require public discussion.  The agenda item was originally listed on the consent calendar, but residents who learned of the item before the meeting submitted an e-comment, which by law triggers mandatory council discussion and a separate vote.

Under the lease agreement, up to 18 acres at the ARDA site, which is located north of the Orange County Great Park will be used by the Auto Center Community Association’s 15 auto dealerships and three landscaping companies for up to three years.

The City Council voted on May 12, 2020 to adopt a citizens’ initiative that zoned the 125 acre ARDA property for a State Veterans Memorial Park and Cemetery. Mayor Shea said that the temporary lease deal presents a way to help the businesses short-term while the ARDA site is under review by the State, and that it does not jeopardize the veterans cemetery.

Many residents disagreed with Shea’s assessment, saying that the agreements could further delay the veterans cemetery and that the council should honor the citizens’ initiative that zoned the ARDA site exclusively for a cemetery and memorial park.

Residents also pointed out that during the meeting, a last minute document was introduced by the city attorney into the discussion, and the public did not have access to the document. The document was posted on the city website the day after the meeting.

That document outlines mitigation measures to minimize trailer and truck traffic and to reduce noise for the surrounding Great Park neighborhoods. The revised agreement also allows for mulch and composting materials to be stored on the ARDA site.

The landscaping companies included in the agreement are Great Scott Tree Service, Ranscapes, and The Arbor Group.