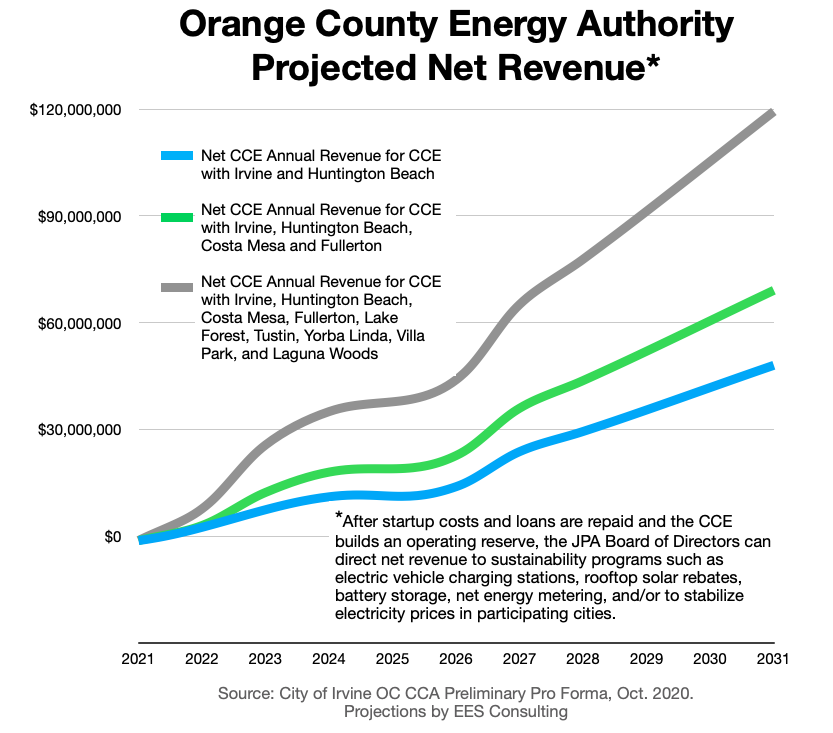 At its November 10 meeting, the Irvine City Council voted unanimously in favor of three programs that promise to bring clean energy, competitive energy pricing and a climate-resilient future to the city.

The votes came at the council’s first meeting after the November 2020 election, which delivered wins for Irvine candidates who campaigned on climate issues, including Mayor-elect Farrah Khan, who earned more votes than any mayoral candidate in Irvine’s history, and Tammy Kim, who has maintained a first-place finish in the city council race since election day.

Votes are still being counted by the OC Registrar of Voters, but Community Choice Energy advocate and current Vice Mayor Mike Carroll is currently in second place, while Larry Agran and Lauren Johnson-Norris, both of whom expressed support for climate action in Irvine during their campaigns, are in 3rd and 4th place, respectively.  The new council will take office in December.

Advocates say the CCE program will transform energy procurement in the region with competitive rates, energy choice, cleaner energy sourced from solar and wind, and revenue that will be reinvested in sustainability-oriented community programs such as electric vehicle charging stations, rebates on rooftop solar, battery storage, net energy metering, and electric heat pumps, among others.

An Irvine study found that CCE will reduce Irvine’s greenhouse gas emissions by 360,000 metric tons each year, roughly the same emissions impact as taking 78,000 cars off the road annually.

A report prepared for the meeting by Irvine’s consultants projects that the program will generate $40-$65 million in annual net revenue by 2027 and $50-$119 million annually by 2031 (see graph).  The amount of revenue generated by the program depends largely on the number of cities that participate and how much electricity they use.

Electricity users in participating cities will be automatically enrolled in the program, but can switch back to SoCal Edison at any time.  SoCal Edison will still manage electricity delivery and billing.

After the startup costs and loans are repaid and the CCE builds up an operating reserve, the JPA Board of Directors can direct net revenue to sustainability programs and/or to stabilize electricity prices in Irvine and other participating cities.

Fullerton’s city council passed an ordinance on November 2nd to join the CCE, and Costa Mesa is expected to vote on its CCE ordinances on November 17th.  Huntington Beach, Lake Forest, Santa Ana, and Villa Park have also taken steps to join. Irvine has invited all Orange County cities to join the CCE JPA.

Cities that join the CCE JPA by the end of this year can begin getting electricity from the CCE in 2022, but those that join later will have to wait until 2023 to begin service due to regulations by the California Public Utilities Commission.

Also in Tuesday’s meeting, the council voted 5-0 to create a Climate Action and Adaptation Plan (CAAP) to reduce carbon emissions from the community and government operations in line with state climate goals. The CAAP will include a greenhouse gas (GHG) inventory for Irvine, vision and goals to reduce GHG emissions, community outreach, monitoring, evaluation, and reporting.

Irvine will join dozens of cities in Southern California with CAAPs, including Long Beach, San Diego, and Los Angeles. The motion directed staff to issue a request for proposals and return a CAAP to the council in Spring 2021.

The council also voted 5-0 during Tuesday’s meeting to implement key projects from the city’s proposed Strategic Energy Plan, another initiative to reduce emissions.