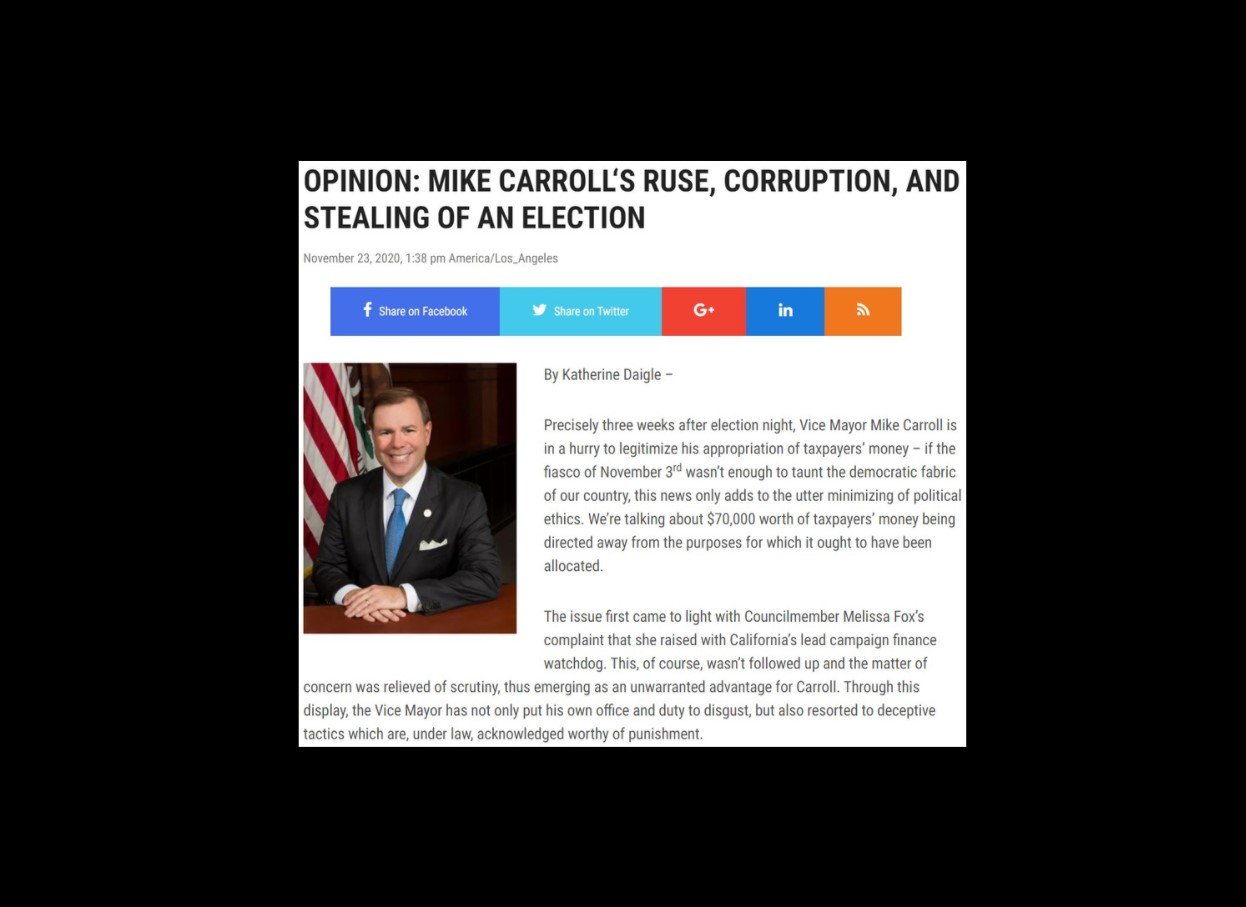 The letter you published from Katherine Daigle regarding Mike Carroll’s communication program crossed the line of what could be considered opinion into the realm of complete defamation and fabrication.

Ms. Daigle, who has been little more than an election spoiler since 2012 and has never earned enough votes to be considered a serious candidate, has joined the group of people who use political rhetoric to make it appear that something insidious has occurred by a City Councilmember using the mail, during a global health pandemic. Since City Hall was closed and Town Halls were canceled, these mailers benefited our residents with timely information on testing centers and food distributions. Not content to allow facts to get in their way, they have argued that the communications were the equivalent of campaigning. To the extent that elected officials are elected by the residents they serve, this slippery slope argument would allow almost any conceivable communication to be viewed as a campaign communication.

Fortunately, the law is very clear on this issue and according to the law and the State Agency responsible for investigating allegations of violations of the Fair Practices Act, Mr. Carroll’s communications were 100% appropriate.

This fact does not serve their narrative, so people like Ms. Daigle (and others who have coordinated a public comment onslaught at Council meetings) have increased the harshness of their rhetoric (and decreased the truthfulness) and called for Carroll to step down and warned of potential jail time. Neither of these remedies is remotely available and if the FPPC had found a violation, the remedy would be a fine. The rhetoric is out of touch with reality.

Finally, the Irvine City Council voted to approve a budget adjustment (which Carroll requested months earlier) which formally ratified the movement of funds from the staffing budget (which were never spent) to the communications budget. No new dollars were expended and the issue has been put to rest.

Kevin Trussell has been an Irvine resident for over twenty years. He is very involved in the community, especially as it relates to children. He has served as an Irvine Community Services Commissioner for ten years, Irvine Children Youth Family Action Committee member, Irvine Children's Fund Board Member and Orange County Drowning Prevention Task Force member. His leadership roles include Chair of the Irvine Junior Games, Chief of the Noble Vikings Charities and Chair of the Southern California Half-Marathon, benefitting Woodbridge High School athletics.