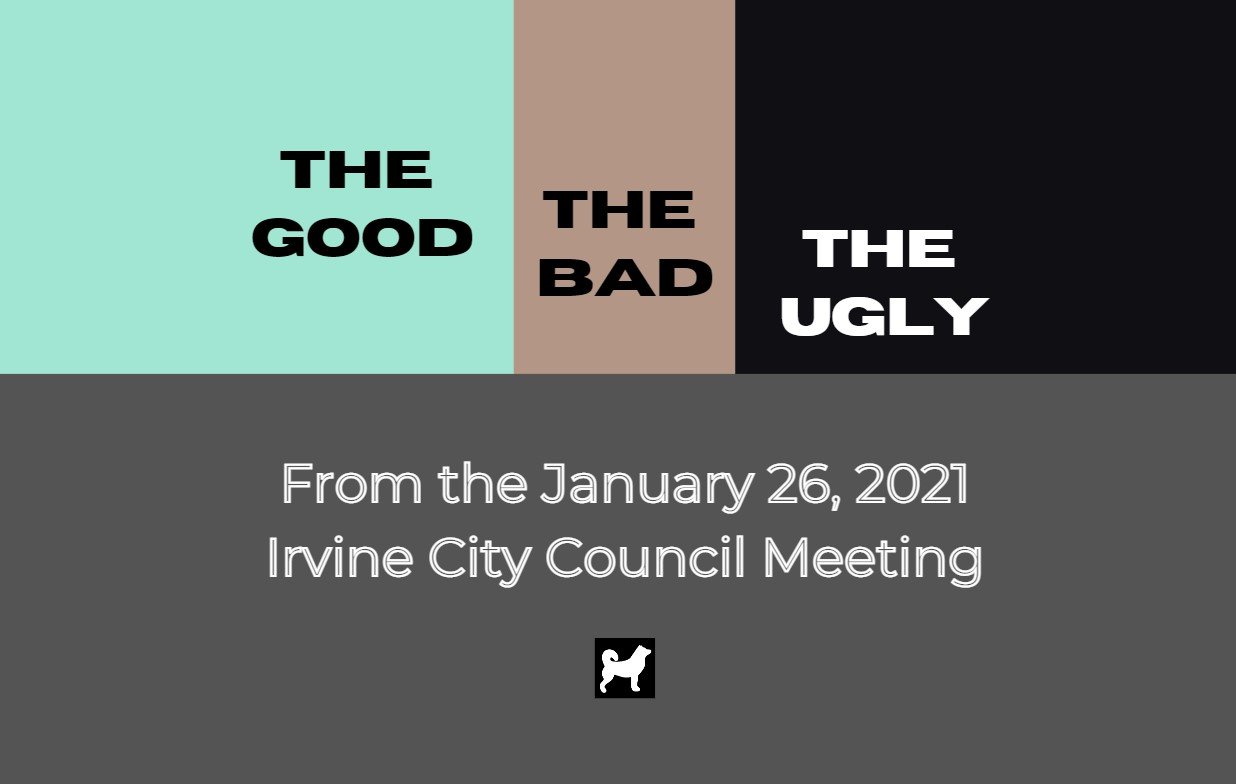 It seems our City Council is a 4-1 majority with Councilmember Larry Agran alone in bold advocacy for public health, local COVID-19 relief efforts, and moving forw

ard with plans for the Veterans Cemetery. Here’s the good, the bad, and the ugly from last Tuesday’s City Council meeting.

The Diversity Equity & Inclusion (DEI) Resolution was brought forward by Mayor Farrah Khan. The initiative came out of meetings with the Black community during a roundtable discussion and strives to address inequalities in the City of Irvine related to hiring practices and treatment in the community that have put Black citizens as well as those in the LGBTQ+ community at a disadvantage in the past. This was a great and much needed resolution as Irvine did not previously score well on the latest Municipal Equality Index. Kudos to the new Mayor for organizing this.

The City has come a long way in having more diverse representation on the City Council and in flying the pride flag. It was not so long ago (2019 to be exact) that Councilmember Mike Carroll described the Pride Flag as a “…spectacle of divisiveness.” In the same year, Councilmember Khan had worked to have a picnic in honor of our LGBTQ community. The BLM movement, while repudiated by then Mayor Christina Shea, was also supported publicly by Councilmember Khan. While Irvine may be late to the process, appreciation of diversity is hopefully going mainstream in the previously socially conservative city of Irvine. The resolution was approved unanimously which was great to see.

Interim City Manager Marianna Marysheva made a presentation on our 2-year city budget. The City of Irvine had a loss of $16 million due to COVID-19, but the impact was cut down to $8 million. $11 million in reserves from the city will be used, but will be replenished over 5 years by cutting overtime, hiring freezes (in lieu of layoffs) and extending loans taken out by the city.

The City has reserves of close to $50 million. This is a laudable accomplishment of financial management during this pandemic. The city has the reserve level suggested (20% of budget according to the Government Finance Officers Association) to have finances available in case of emergencies. This is especially important now since nobody knows how the pandemic will play out. Another factor brought up during the meeting was the need to be financially ready to repair damage from possible future fires.

During the budget item, Councilmember Larry Agran proposed the use of $10 million from our $50 million reserve for COVID-19 relief for businesses and residents. He also asked that $2 million be earmarked to hire full-time nurses for each IUSD and TUSD school in Irvine. He received zero support from the other four councilmembers or any mention by anyone on the Council that the financial impact would be looked into. After some pushback from Interim City Manager Marysheva and Mayor Khan, Councilmember Agran added the following,

“I think it’s morally irresponsible to try to maintain a $50 million rainy day contingency reserve without drawing it down or expecting to draw it down through a once in a 100 years pandemic that is so devastating. I take no heart or pride in maintaining our reserves at a $50 million dollar level without deploying them to get through the pain and suffering experienced by so many people now. I think it’s very important to consider that, as a philosophical matter if nothing else.”

IUSD Executive Director of Student Support Services Dr. Tammy Blakely gave an informative presentation explaining the funding for schools in Irvine and how getting funds through the City of Irvine EPF (Educational Partnership Fund) which gives nearly 2 million dollars per year to IUSD has helped the schools to be successful. This additional funding through EPF is necessary in part because under the Local Control Funding Formula, Irvine receives less funding per student than the national, state, or even county average (see chart below).

There are more than 23,000 students on campus and more than 3,000 staff. The EPF has helped to pay for 4 of the 21 current Full Time Equivalent nurses which is great; however, according to Irvine Unified School District’s website data, that would mean there are far more schools than nurses:

As the cases are currently going down, nurses in schools may not seem that important; however, with new variants on the rise and new vaccines not yet approved for children, it seems that having nurses on staff at each school during this global pandemic should be a priority.

Additionally, according to the CDC, school nurses are an important part of open schools during the pandemic:

Councilmember Agran presented a resolution to begin construction of the Veterans Cemetery at the ARDA site. The agenda-setting policy, not allowing items to be placed on the agenda unless they receive support from at least two councilmembers or the mayor herself  — which means the issue is not even open for e-Comments or discussion during the live meetings — has precluded Councilmember Agran from adding his resolution to begin immediate construction at the site favored by Irvine voters onto the agenda.

It has been almost a decade and residents have shown overwhelming and passionate support for the cemetery at the ARDA site. The new mayor and vice mayor received a lot of support for their elections from Irvine voters who were hoping to finally have the numbers on the city council to get the cemetery built at ARDA — several of whom called during the live meeting last Tuesday to voice their frustration.

Councilmember Agran also presented a Memo on behalf of organized residents in the northern part of Irvine, seeking a City Council-initiated public study session regarding continued operations at All American Asphalt. It was a reasonable request that none of the other councilmembers supported. Mayor Khan stated the city is waiting to hear from South Coast Air Quality Management District (SCAQMD) on a date, but shouldn’t our representatives on the City Council be taking the lead by picking a date and asking SCAQMD to attend?

We need our leaders to stand up against the powers that be and advocate on behalf of Irvine residents. So, where is the second?

Opinion: Our City Council must take the lead to protect its residents. Enough excuses.