Kevin Shenkman Served Irvine With a Letter. Will District Elections Be Coming to Irvine? 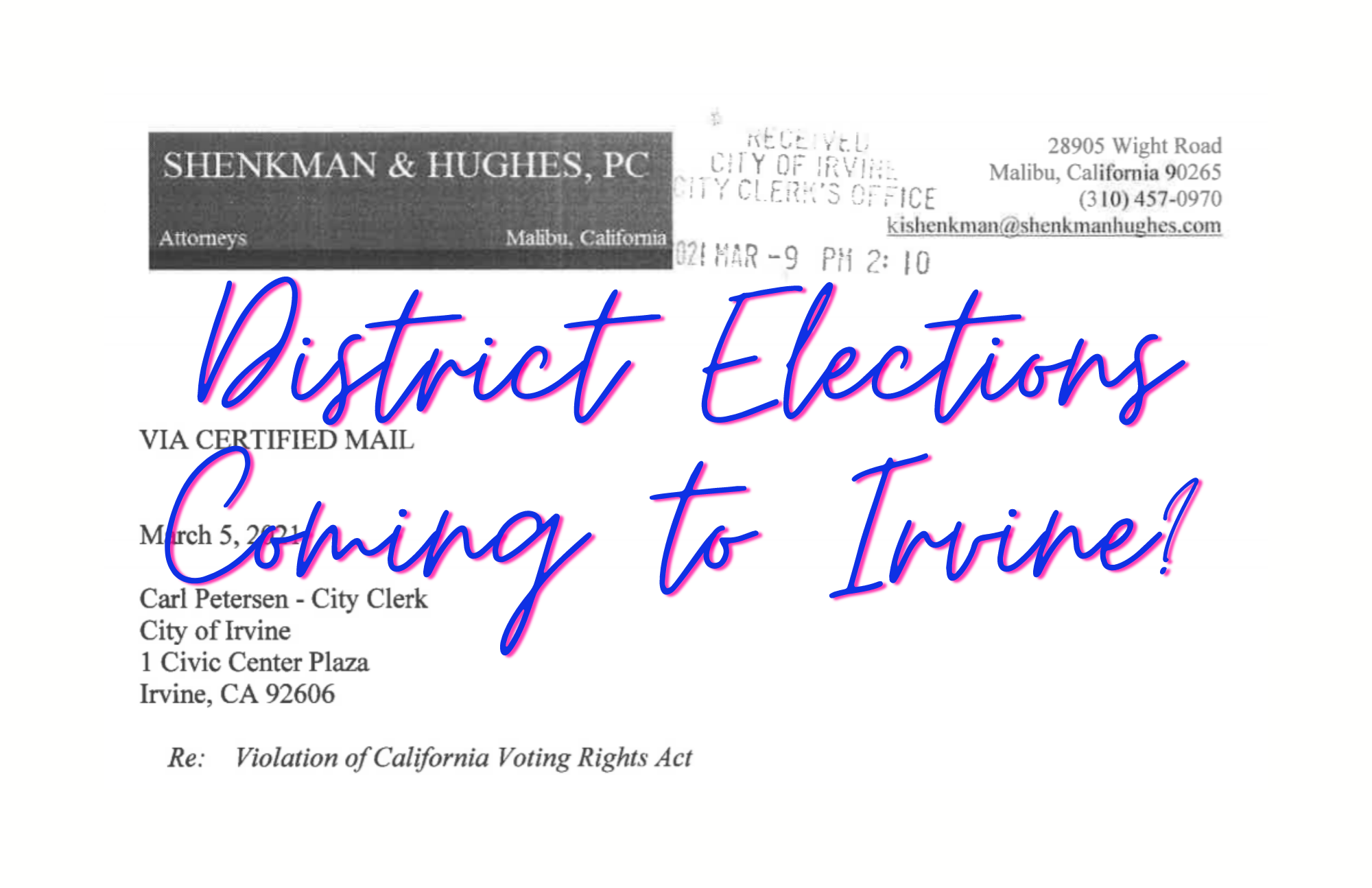 There is a fight going on nationwide between those who want increased democracy with increased access to voting for all qualifying populations and those who would prefer if minorities’ rights to vote embedded in the hard won amendments to the constitution were effectively and efficiently revoked.

What does this have to do with Irvine?

Irvine holds at-large elections. These are elections where everyone in Irvine, regardless of neighborhood or zip code, gets to vote for all members of the City Council. This is in contrast to what would occur if we had district elections.

Why does this matter?

District elections are seen to allow for more minority representation at the municipal level. The result of at-large elections can result in a council that lacks the diversity of its own city and would be unlikely to fully represent the interests of their own constituents.

What law is being broken exactly?

The California Voter Rights Act. Existing law, the California Voting Rights Act of 2001 (CVRA), prohibits the use of an at-large election in a political subdivision if it would impair the ability of a protected class, as defined, to elect candidates of its choice or otherwise influence the outcome of an election.

Still not convinced Irvine will need to change its elections?

According to Eric Dunn, an attorney for the City of Hesperia, no local government that holds citywide elections has ever won a California Voting Rights Act lawsuit, according to the League of California Cities. LA Times | Willon

“For the past several years, Shenkman, who lives and practices law in Malibu, has been suing, or threatening to sue, cities all over Southern California, demanding they change the way they elect members of their city councils in order to increase the numbers of African-American and Latino representatives.” LA Times | Abcarian

“In Orange County alone Shenkman has played a central role in forcing district-based elections or ballot measures for the election in November, in city councils and school boards in several jurisdictions. They include school boards and city councils in Buena Park, Costa Mesa, Garden Grove and San Juan Capistrano.” Voice of OC | Vo

City of Irvine received a letter from Kevin Shenkman

At this Tuesday’s closed session, agenda item 1.2 will discuss the letter received by attorney Kevin Shenkman, who is known for suing cities throughout the state prompting cities to switch to district elections. The Shenkman letter states,

“Given the racially polarized elections for Irvine’s city council and exogenous elections, we urge the City to voluntarily change its at-large system of electing its City Council. Otherwise, on behalf of residents within the jurisdiction, we will be forced to seek judicial relief. Please advise us no later than April 25, 2021 as to whether you would like to discuss a voluntary change to your current at-large system. We look forward to your response. Very truly yours, Kevin I. Shenkman”.