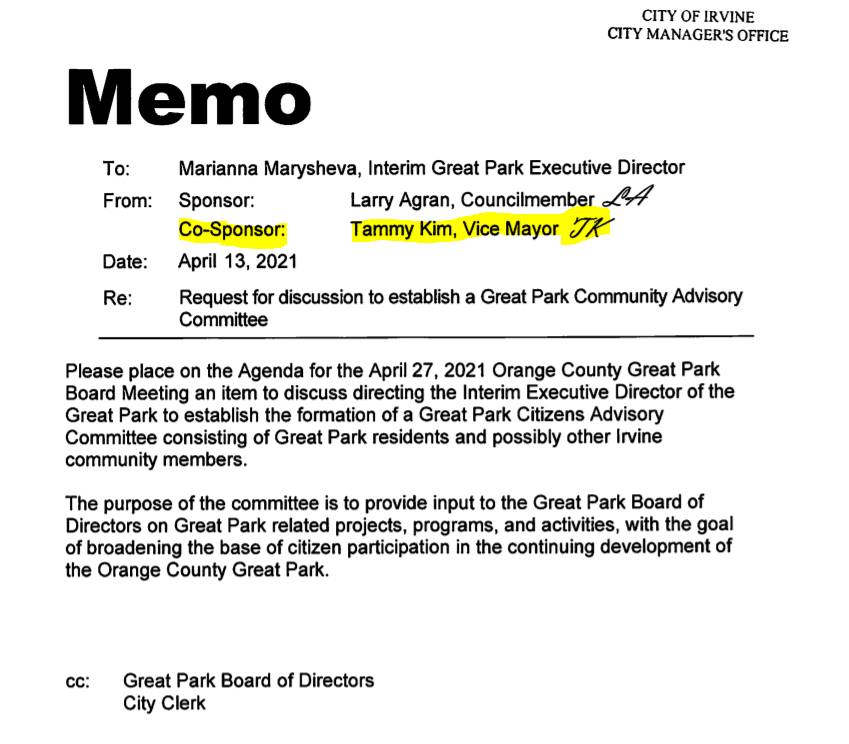 At the 2020 Irvine City Council Candidate Forum held by Irvine Watchdog, the candidates were asked the following (watch the entire forum here):

On April 13, 2021, Councilmember Larry Agran circulated a Memo to all Councilmembers requesting a “discussion to establish a Great Park Community Advisory Committee” for the Orange County Great Park Board (OCGPB) meeting on April 27, 2021. Councilmember Tammy Kim seconded this Memo as highlighted below. There was no support for the Memo from Mayor Khan.

However, the item did not appear on the April 27, 2021 meeting agenda. Councilmember Agran’s website, which provides all the Memos he has circulated to the City Council, noted,

“On April 14, 2021, Vice Mayor Tammy Kim requested her second signature be removed. As such, this item was not put on the Council Agenda.”

Without Kim’s support, the item could no longer be formally discussed at the OCGPB meeting.

On May 25, 2021, after seconding Agran’s Memo above, Councilmember Kim took aim at Agran, saying if he wanted support to place items important to him on the agenda, he needed to communicate better. Kim further stated, “He has never once reached out to me. I thought we were on the same team here, but I don’t know.” Voice of OC | Biesiada

The public is left with questions:

Finding Your Way Around The Great Park Gets Easier

Branda Lin is an Irvine native and a founding member of Irvine Watchdog. Her passion is to promote civic engagement and empower residents on local Irvine issues. She has served as an Irvine Community Services Commissioner under Farrah Khan, Irvine Children Youth Families Advisory Committee member, and a driver for Irvine's Meals On Wheels program.