Irvine Police Crack Down on Loud and Racing Vehicles 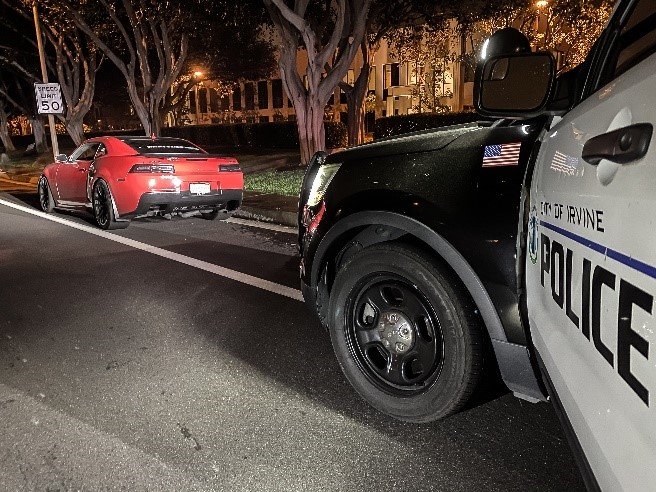 Sergeant Kim explained the phenomena of street takeovers is the act of choosing a street, usually at an intersection, to meet with other drivers and spectators to form a human wall encircling vehicles performing dangerous burn outs. Evidence of burnouts and takeovers manifest in numerous tire marks and donuts left in the streets that, Sergeant Gales explained, could cost the city to clean in upwards of $14,000 per incident.

A graph shown during the presentation demonstrated positive results from greater issuances of citations (which include loud modified vehicle exhausts). Specifically, from 2019-2020 there was an 84 percent reduction in traffic collisions as a result from greater issuances of citations. Of those cited for reckless driving, car racing, loud exhausts and the like, the perpetrators did not necessarily reside in Irvine. Some perpetrators came from Los Angeles County, San Diego County, and as far as Alameda County.

Irvine Police have also collaborated with the Orange County District Attorney’s office in finding charges with harsher sentencing. For instance, Irvine once relied solely on charging misdemeanor reckless driving. However, they are now charging crimes with harsher sentences such as felony vandalism and conspiracy. Irvine also pursues restitution to reimburse the city the costs of cleaning the streets.

City Councilmember Tammy Kim inquired how police can catch racing or loud vehicles streaking down our streets at a high rate of speed and the effectiveness of calling the police when the drivers are gone within seconds. In response, Irvine police noted their response time can be under a minute and encouraged the public to call them on their non-emergency line at (949) 724-7000. Furthermore, a large part of enforcement efforts is to gather data and synthesize patterns of behavior to better focus directed enforcement. Police also gather data and assistance through their intersection cameras at select locations.

The presentation was an encouraging reminder that Irvine Police are not ignoring the issue of street racing and loud vehicles. However, it remains to be seen if the new enforcement efforts can bring a sustained decline in noise pollution, takeovers, and racing.