Are We Prepared for Wildfire Season? 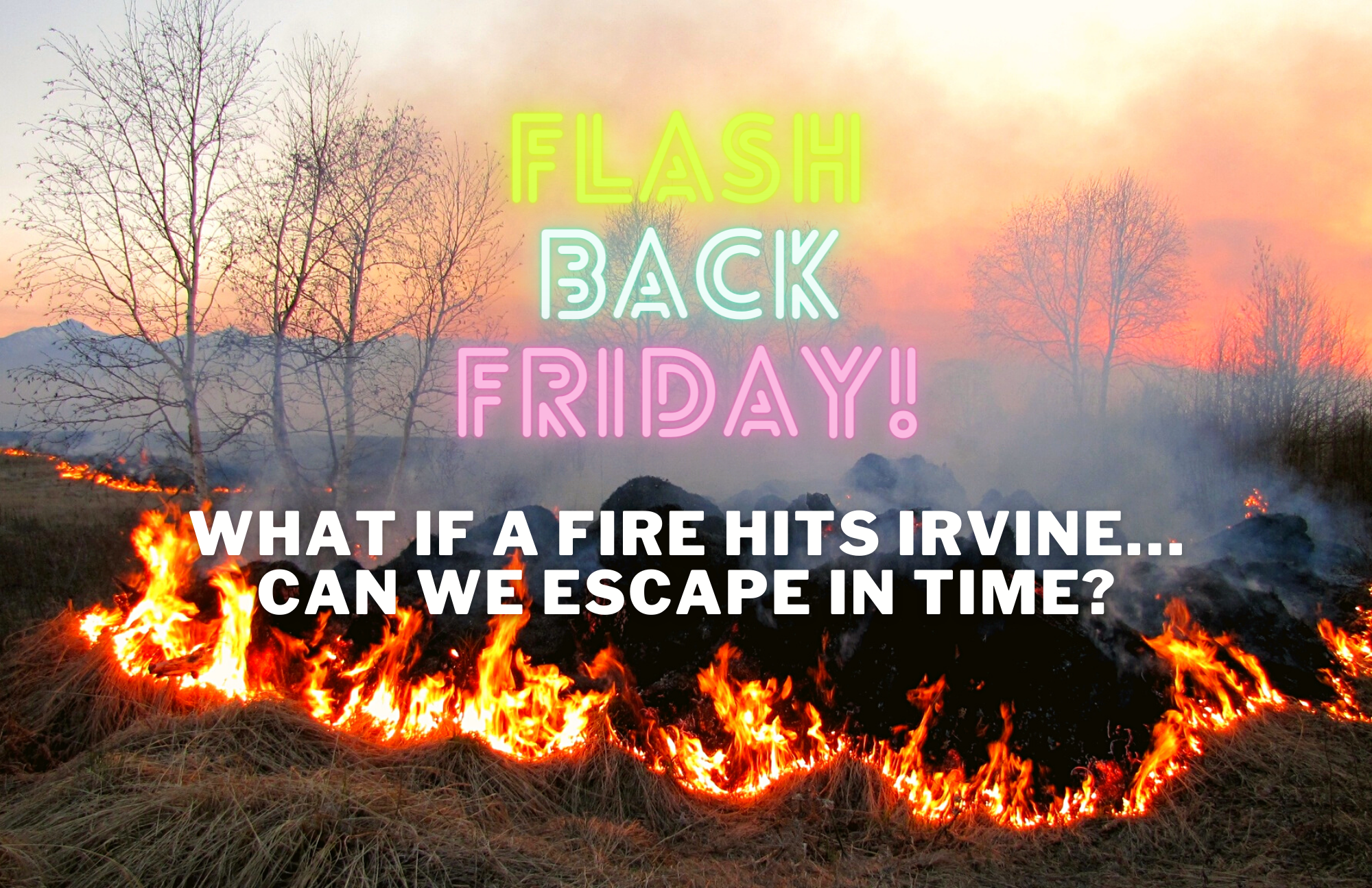 Welcome to Flash Back Friday!

In this edition, we are re-posting a previous Irvine Watchdog article below that discussed local resident concerns with evacuation routes during the 2020 Irvine wildfire that forced 60,000 people from their homes.

As we prepare for another dry summer, the risk of a wildfire is still very real and we encourage you to prepare. Here are links to few valuable resources:

Here is our Flash Back Friday Article:

What If? A Fire Hits Irvine…Can We Escape in Time?

During the summer and fall of this past year, much of the news surrounded the fires in California. It is little wonder why. This year’s wildfire season was considered to be one of the most damaging ever recorded. According to the California Department of Forestry and Fire Protection, nearly 1.7 million acres burned which is the biggest amount burned in a single fire season. But what was particularly scary was the death toll from the Camp Fire in a city called Paradise in Northern California’s Butte County that killed 86 people.

What were some of the causes? Like other tragedies, this city’s death toll had many causes which were the hot weather and according to a recent LA Times article included having no plan to evacuate the entire city at one time, using a public alert system that itself was vulnerable to fire and not giving out a city order to evacuate. But another cause mentioned is the following: “Developers started with what had been gold mine trails and then apple orchard roads to pave a street system that maximized buildable space the way blood vessels branch into capillaries. There are nearly 100 miles of private roads that dead-end on narrow overlooks and few connector streets.”

Are there similar areas of concern for Irvine? I am not familiar with all the geography of Irvine. But two possible areas of concern come from my neighborhood of Portola Springs which appears to be partially in an area designated as a “very high fire hazard severity zone” according to the California Department of Forestry and Fire Protection. In the area between Portola Parkway and Irvine Boulevard that is west of Arrowhead, there are two exit routes on Arrowhead and on Native Springs but both going north to Portola Parkway. What if the fire is coming down from the north and fast? There is an exit to the south on Native Springs leading to Irvine Boulevard. But it is blocked by a locked gate. According to Irvine resident RA Anderson who wrote about this in a recent Nextdoor post in my neighborhood, the police would open this way up during an emergency. But as the resident went on to ask: Will the police actually do this in the chaos of such a major fire? How many residents even know about this? Sadly, this thread died off with no answers.

Another area next to Portola Springs and Modjeska (with the streets of Hemisphere and Ceremony) has a similar problem. There is only one way in and out, a two-lane highway. It could have been connected to Portola Parkway but is closed off – again some kind of one lane leading to a gate. The two-lane road goes south but then winds north a bit to get to Modjeska. On the Modjeska and Portola Parkway intersection, there is a fire station. If there is a major fire that one fire truck cannot handle and even if it comes from the north, will there be enough time to escape?

Keep in mind two things. First, consider the following passage from that recent LA Times article: “After 2008, a forest road north was paved to provide escape for residents on the upper ridge above Paradise. On the day of the fire, the narrow winding passage jammed and was impassable.” Second, wildfires are not necessarily slow. For example, the Camp Fire in Northern California moved the length of a football field every second.

In California, evacuation planning has been and continues to be a local responsibility.

Again, I do not know much about Irvine’s geography and am no fire expert. What I am is a concerned Irvine resident. A cursory look at city maps seem to show several areas with very few escape routes – especially some of the areas built more recently. But if such concerns are not serious and (hopefully) I do not know what I am talking about, I would like to know. If such concerns are serious, I want to know and to see how and when such concerns will be addressed.

With the change in weather and the fires no longer in the news, attention has shifted elsewhere – e.g., the partial shutdown in Washington, the end of the HOV green and white stickers – and may not return until the next fire season or the next major fire in California. But I believe that consideration of major problems needs to be proactive and not reactive. Accordingly, questions need to be answered, whether fires are part of the current news cycle or not.

Silverado Fire: Beyond Thoughts and Prayers for Our Injured Firefighters