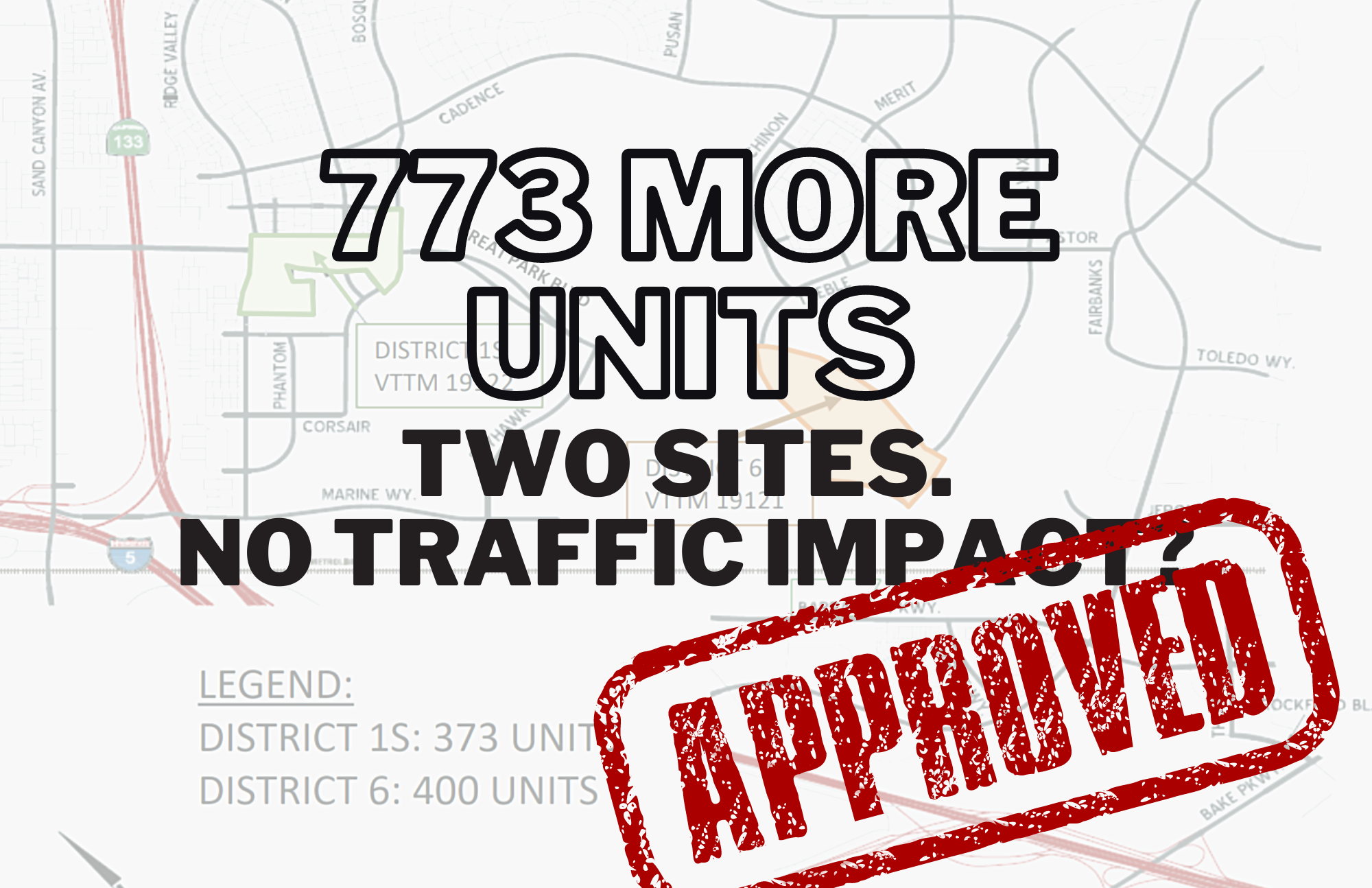 At a Tuesday afternoon special meeting, the Irvine Transportation Commission voted unanimously to approve a traffic study finding that FivePoint’s proposed construction of 773 condominiums in the Great Park Neighborhoods would not generate sufficient traffic to require street improvements at intersections and arterial roadway segments.

The approval sets the stage for Planning Commission consideration of construction of a total of 2,008 condos at its meeting on Thursday, July 1, at 5:30 p.m.

The Transportation Commission’s approval was limited to two of the three tracts to be considered by the Planning Commission:

District 1S — The first tract in question, Vesting Tentative Tract Map (VTTM) 19122, consists of about 27 acres bounded by Carmine and existing residential units to the north, Ridge Valley to the west, Hornet to the south, and Bosque to the east. FivePoint proposes development of up to 373 residential condos and a retail/multi-use development on the land. Access to the tract is via Ridge Valley, Great Park Boulevard, Beacon and Bosque–all existing public streets.

District 6 — The second tract, VTTM 19121, consisting of about 69 acres, is bounded by the Great Park to the north, the Great Park Wildlife Corridor to the south, future “O” Street to the east, and future Marine Way to the West. FivePoint proposes development of up to 400 condos and a private park on the land. Additionally, there would be a water quality basin owned and maintained by Irvine Ranch Water District. Access to the tract is via Chinon, Treble, Merit and Lynx—all existing public streets. Future public streets providing access would include “O” Street and “A” Street.

Development of District 5-South and Development of District 6-North — Not reviewed by the Transportation Commission but will be up for approval on Thursday, (VTTM 19130) — which proposes to subdivide approximately 193 gross-acres into 58 numbered lots and three lettered lots for residential condominiums, private park, and landscape purposes. The project site is generally bounded by Astor to the north, Chinon and Treble to the west, “O” Street to the south, and the Orange County Great Park Wildlife Corridor to the east.

The matter generated public comment via Zoom by five speakers. Two residents of Great Park Neighborhoods spoke of crowded conditions, heavy traffic and insufficient parking on their residential streets. Two other speakers, including a representative of the Sunrise movement, spoke of the need for more public transit and walkable and bicycle friendly communities.

The fifth and final speaker, FivePoint lobbyist Patrick Strader, stated that the condo units at issue had already been studied and approved. Strader asserted that Commission consideration had not been fast-tracked, noting that matter had been subject to staff analysis since last September. Irvine Watchdog previously reported that the special meeting was necessary to allow Planning Commission approval at the Thursday meeting.

Irvine Watchdog’s previous article found in the draft minutes of the June 15 meeting a suggestion that the special meeting was hastily called. The draft minutes stated that the Chair “adjourned the meeting at 6:24 p.m. to a regular Transportation Commission meeting on July 6, 2021, at 5:30 p.m.” When the minutes came up on the consent calendar for the special meeting, Chair Sidney Wu stated that there was no mention of the next meeting at the June 15 meeting, and entertained a motion to strike the quoted language. The motion was made, seconded, and passed unanimously.

It remains unclear when and why the special meeting was called, but the effect was to shorten the public notice required under the Irvine Sunshine Ordinance from 12 days to five, as well as to facilitate earlier Planning Commission approvals than would have been possible otherwise.

The agenda and instructions for public participation at Thursday’s Planning Commission meeting are here.

[Opinion] I Am Curious about Irvine’s Transportation Department and Commission

Another Big Give-Away to FivePoint?