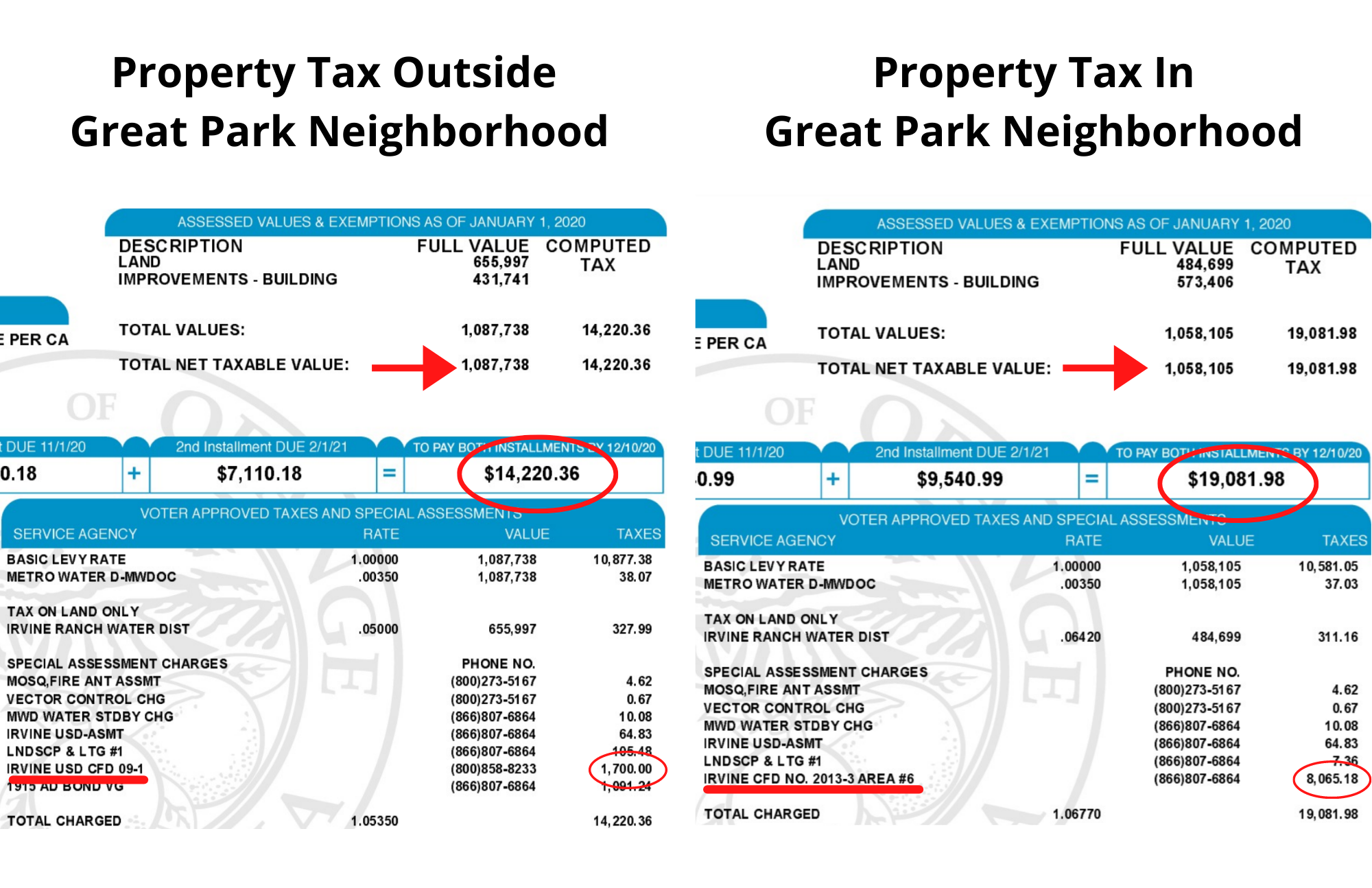 The Great Park Board will be presenting the history and purpose of the Great Park Communities Facility District (CFD) special tax at its meeting on Tuesday, July 27 (agenda item 1.2).  The staff report includes a presentation which left out several key decisions over the years that changed the usage of CFDs, with the most recent 2019 vote approving “additional CFD eligible facilities.” See presentation.

Only homeowners in the Great Park Neighborhoods are required to pay the Great Park CFD special tax. Specific amounts are assessed on each residence in the district and paid semiannually, with exemptions for affordable units in the moderate income category and commercial property.

A side-by-side comparison of two Irvine properties with a similar “total net taxable value” show a significant increase in total property tax for the Great Park Neighborhood (GPN) home. Additionally, both properties are in Mello-Roos neighborhoods and currently on the market with similar asking prices.

The line item costs are similar until you get to the CFD special tax. In this example, the Great Park Neighborhood property is subject to almost $6,000 more annually due to the special tax, listed as “CFD No. 2013-3”.

The tax term is perpetual — there is no end date for the special tax. The CFD tax is adjusted up 2% annually; however, after 40 years the tax is to be significantly reduced. According to the staff report, “there is no realistic way to terminate the perpetual term of the Special Tax prior to the repayment of all bonds.”

According to the Voice of OC, “City officials promised at the time that the same Great Park would be built.” But with new Councilmembers every two years, a decade later we find “the Park has no final budget or clear end in sight, and no finalized master plan, according to Irvine’s records.”

“That means that 3,250 current homeowners [in 2020] in the Great Park are now responsible for paying back nearly $600 million in debt, a number that will only rise as more people move into the park neighborhood and the city continues construction according to city records.”

The CFD Tax and Its Purpose

A CFD is created by means of an agreement whereby the developer/buyer of land located in a specific district agrees to fund construction of eligible facilities and services located on the property using financing from the sale of bonds which are repaid by special taxes placed on a parcel owners’ tax bill.

The staff report adds, “to form a CFD, the landowners petition the agency for the creation of the CFD, and a two-thirds vote of all affected landowners must occur ratifying the CFD and the Special Tax. Once created, the Special Tax becomes binding on properties within the CFD, and is passed in the chain of title for each parcel.”

“CFDs operate to build and maintain public facilities, and is a tool for the funding of such public improvements that arose after the passage of Proposition 13 when many cities and counties stopped building new public infrastructure due to the reduction in tax receipts caused by Prop 13.”

The City of Irvine has three existing CFDs (including the Great Park CFD), and the Irvine Unified School District has 11 CFDs, which cover much of the City.

On March 26, 2013, the Great Park “CFD No. 2013-3” agreement was unanimously approved (Councilmember Krom absent) by the City Council for the Great Park and surrounding areas to fund the eligible facilities and services.

In July 2014, “Irvine issued $72.7 million CFD No. 2013-3 special tax bonds for the 726-home Pavilion Park. Then in March, the developer requested another bond issuance for Beacon Park to pay for facilities that serve the Great Park Neighborhoods and the Orange County Great Park.” OC Register | Tomoya

On July 26, 2016, the City Council approved Fivepoint’s proposal to issue special tax bonds of up to $144 million to fund infrastructure at the development at the Great Park Neighborhoods. “Homeowners are estimated to pay special taxes ranging from $4,455 to $14,387 on their 2016-17 property tax bills based on the size of their property, according to the staff report.” OC Register | Tomoya

This 2019 vote changed the list of “eligible facilities” to include a state-of-the-art Olympic-class water polo, indoor volleyball/basketball facilities, supporting parking structure, and more. All the newly added eligible facilities are listed in Exhibit D-2 (page 1 of 4 shown below).

What Has the CFD Money Been Used For?

For more background read the Voice of OC’s: The Great Park Tax: How Irvine Homeowners Are Paying For The City’s Big Dreams