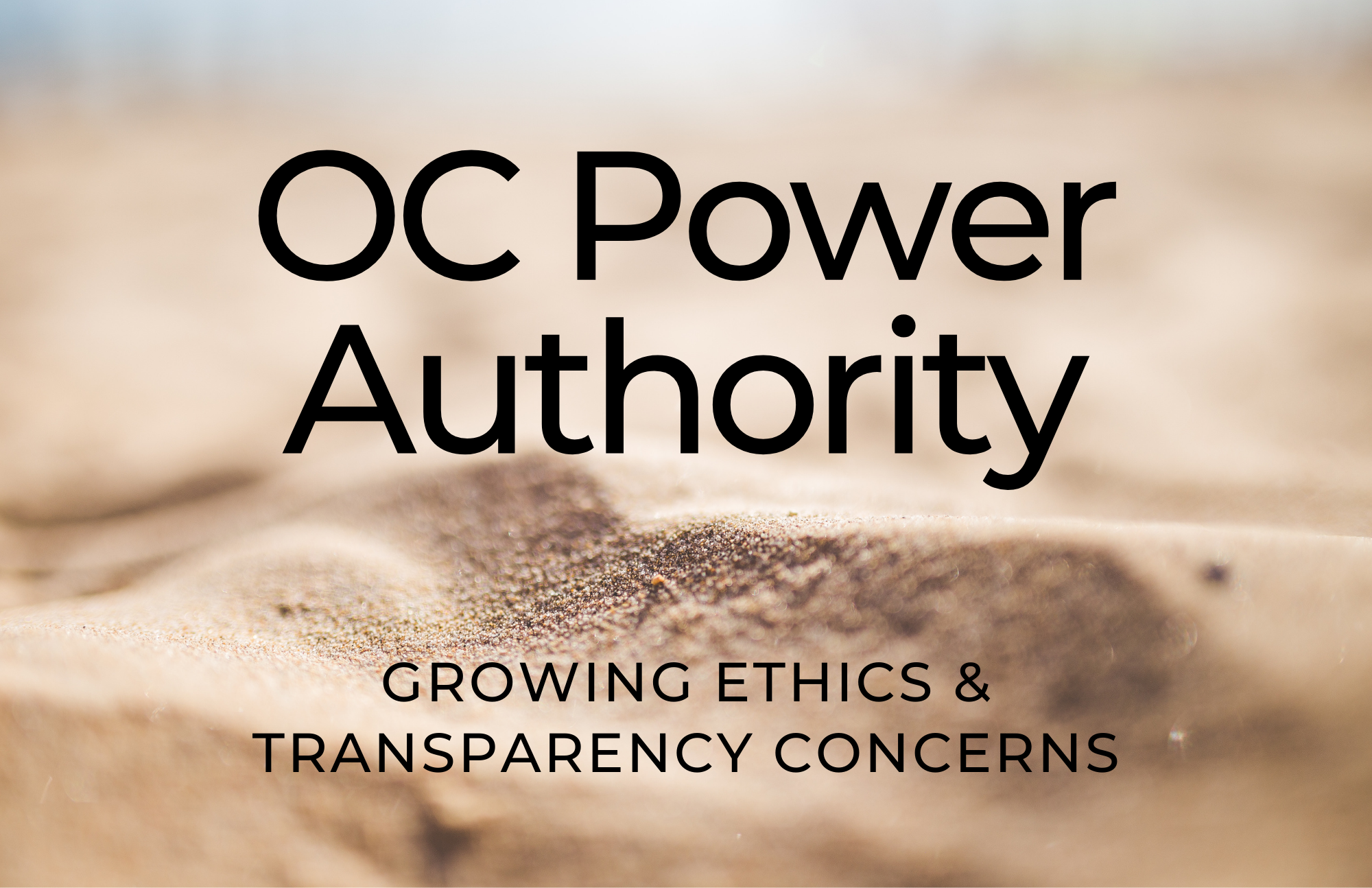 “Without a solid foundation, you’ll have trouble creating anything of value.”
-Erika Oppenheimer

On August 31, 2021, the Orange County Power Authority (OCPA) held a meeting in Irvine Council Chamber to present seven energy efficiency programs and welcome public input. Given the list of concerns due to the lack of transparency and the lack of qualifications of the appointed CEO Brian Probolsky, at the end of the meeting I directed two questions to the CEO himself.

Question 1: Why are almost half the meeting videos still not available to the public on the OCPower.org website?

“upon a request for a copy of records, shall, within 10 days from receipt of the request, determine whether the request, in whole or in part, seeks copies of disclosable public records in the possession of the agency and shall promptly notify the person making the request of the determination and the reasons therefor.”

Probolsky answered by explaining there are just the two staffers, himself and the COO Antonia Castro-Graham, several public records requests in the queue, and that their attorney Best Best and Krieger would be responding.

The California Public Records Act (CPRA) is a series of laws meant to guarantee that the public has access to public records of governmental bodies in California, which the newly formed Power Authority is now in violation of under CEO Probolsky’s direction.

The CEO of an organization funded by $2 million in Irvine tax dollars should find it imperative to comply with the California Public Records Act. However, Probolsky showed no concern regarding the CPRA violations and demonstrated little effort to comply.

“Orange County officials have sanctioned an influential OC GOP insider, Brian Probolsky, for attending weekday meetings as an elected official with the Moulton Niguel Water District board member last year while also on the clock in his job as a business practices manager at the county’s Community Resources Department (OCCR), according to sources knowledgeable about a completed human resources investigation into the matter.”

Probolsky didn’t show any time off on his county timecard for water district meetings, according to sources.

Probolsky is currently president of the Moulton Niguel Water District despite the OCPA’s risk management policy stating employees are prohibited from working for another utility while employed by OCPA.

The 2015 article continues, “Probolsky was formally criticized in internal documents just last week for threatening the HR investigators with political retribution for their investigation while he worked as a chief of staff to Bates.” He was cited for “extremely inappropriate” actions and warned privately that his threats against investigators would not be allowed to continue.

In 2016 Voice of OC reported, Brian Probolsky, serving as Chief of Staff, received thousands of dollars in reimbursements from Supervisor Andrew Do’s campaign, according to campaign disclosures. And the campaign paid another $3,000, marked as being for campaign consulting, to a company registered to Probolsky.

During this same period, which covers almost three months between July and late September, Probolsky reported full-time work at his county job, which pays about $10,800 per month, while working on Do’s campaign. Under state law, it is illegal to use public resources, including taxpayer-funded work hours and facilities, for political campaign work.

In 2020, Brian Probolsky was appointed CEO for the OCPA in a closed door session. Every other leader of a California CCE of a similar size has a relevant undergraduate or masters degree and 16+ years experience in the energy industry.

Probolsky has no relevant experience or education in the energy industry.

As stated in a previous article, on June 22, 2021, in a meeting with OCPA staff, consultants and advocates, Probolsky’s lack of knowledge on basic energy concepts was made evident when he asked what the acronym kWh stands for. kWh stands for kilowatt-hour, and is a standard unit of measurement for electricity.

OCPA’s Energy Risk Management Policy named six different kinds of risk that go along with any CCE, and says that managing those risks requires delegation of authority commensurate with responsibility, experience and capability. However, on July 13 the OCPA board unanimously adopted an Energy Risk Management Policy that delegated authority to Brian Probolsky, who has no experience or college degree, for $75 million in energy transactions. (See table 6.5 below)

CEO Probolsky with no experience or degree has authority for $75M in energy transactions.

So why did the OCPA appoint this “influential OC GOP insider”?

An ethical foundation built on transparency and qualified leadership is imperative. Less than a year in, the appointment of Brian Probolsky becomes all the more unjustifiable as the concerns continue to mount.