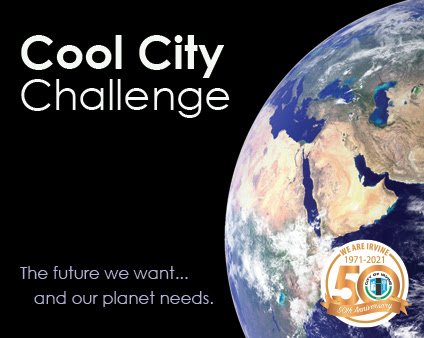 The City of Irvine needs at least 104 more residents to sign up as leaders in a city-wide climate initiative by Monday, Sept. 20 to secure $1 million in funding for its climate efforts, including an ambitious 2030 zero carbon goal.  The Cool Block program promises to give residents who care about climate change a way to make a meaningful impact on the issue. As of Friday, 71 Irvine residents had signed up for the program.

A Cool Block leader commits to finding 5-8 households in their neighborhood to join their Cool Block team.  Leaders will also lead an informational and team-building meeting with households on their teams. After the first meeting, workshop meeting responsibilities are shared with the team.

Over the course of six months, Cool Block teams will meet, discuss, and implement information related to energy efficiency, water conservation, emergency preparedness, and more.  If Irvine can find 104 more volunteers, the program will get started in the next few months.  The program has been successfully implemented in numerous cities in California and around the world.

The Cool Block program is part of the Cool City Challenge, which was created to address the fact that cities generate 70% of the planet’s carbon footprint, and citizens generate 70% of those emissions through daily lifestyle choices.

Climate scientists have said that humans must achieve by 2030 what governments have been aiming to accomplish by 2050 in order to avoid irreversible ecological tipping points. To achieve this, the program proposes that humans need to change the way we think about change, calling for a climate moonshot strategy.

Read more about the moonshot at Greenbiz, and learn about the vision that inspired the prize here.