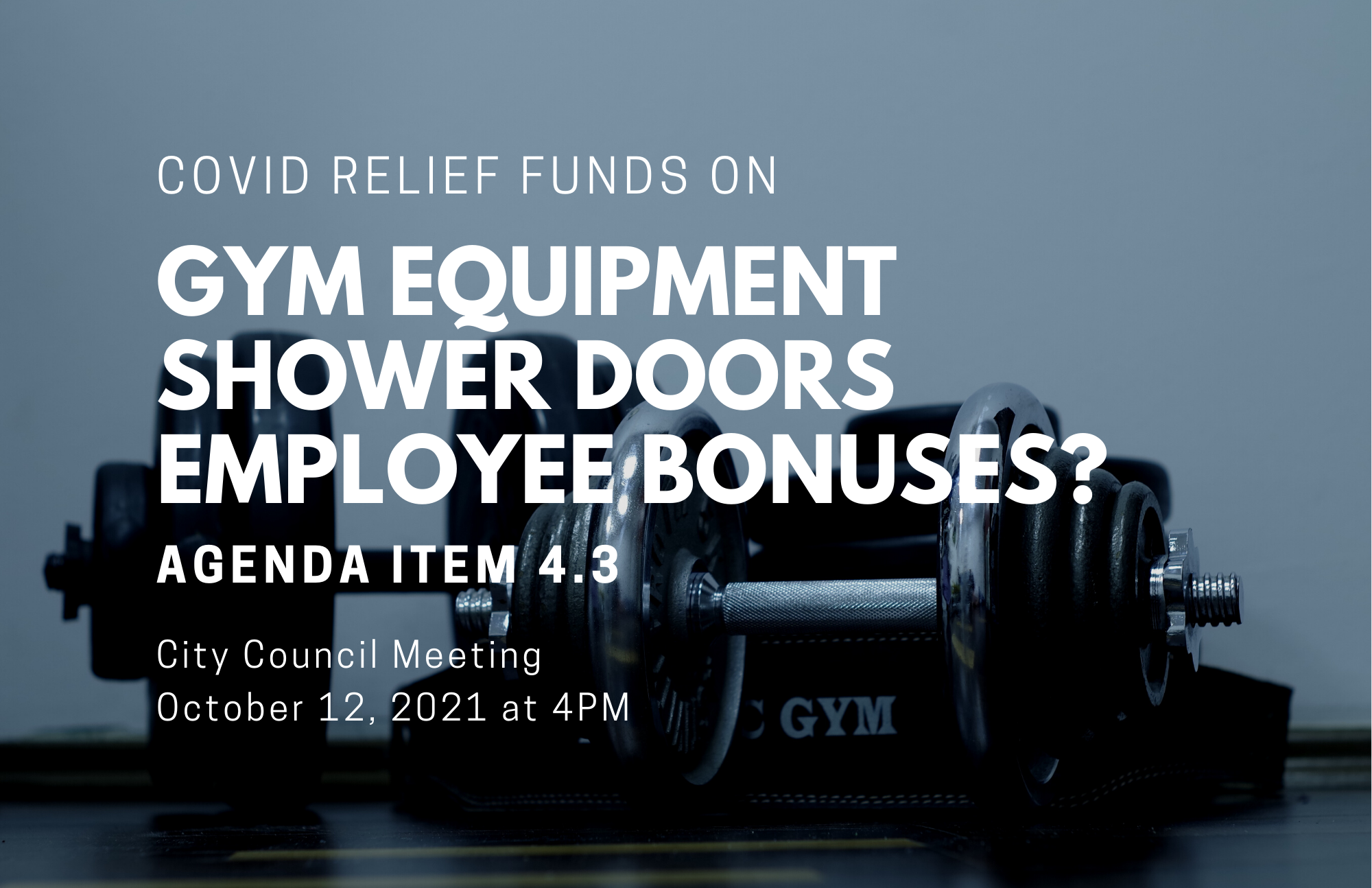 Three million dollars is a lot of money. That is approximately how much Irvine city staff and the Irvine Finance Commission propose to spend on a new City Hall gym, shower doors, and city employee bonuses.

Irvine will receive $56 million direct one-time payment from the Federal Government for spending on areas within the city negatively impacted by COVID-19. Specifically, according to the American Rescue Plan Act (ARPA), funds should be used primarily for:

How did proposed spending on a City Hall gym, shower doors and city employee bonuses sneak into the overall ARPA spending plan? It starts from Irvine City staff. This includes the powerful Interim City Manager, Marianna Marysheva, Assistant City Manager, Michelle Grettenberg, and a host of other directors of various Irvine city departments. They compile a “wish list” of items they want the ARPA funds to go toward and send their proposal to the Finance Commission, chaired by John Park.

While much of Irvine’s proposed ARPA spending fits neatly within ARPA’s intended purpose, three million dollars worth of spending items fail to meet that standard, and constitute an attempt by the city to divert funds away from public relief in favor of amenities and bonuses for city staff. Despite this amount constituting a small fraction of the $56 million dollars, it sends a clear message. This city feels entitled to enrich themselves and they believe nobody is looking. The city, in effect, is skimming off the top of ARPA funds via city employee bonuses and modernized City Hall facilities before investing in COVID-19 related areas that will benefit the public at large. This is not just bad optics. It also means those in most need would be deprived of three million dollars.

For instance, city staff and the Finance Commission seek $625,000 in ARPA funds to modernize the city’s employee fitness center and locker rooms located at Irvine City Hall, accessible only to city employees. And an additional $10,000 is proposed for glass shower doors. This expense has absolutely nothing to do with compensating for losses caused by the pandemic.

The pandemic did not impact the City Hall gym, shower doors and locker rooms. This brazen attempt to pay for City Hall improvements could potentially be a political favor. After all, Interim City Manager Marysheva, is seeking to remain in her position without the “interim” title and likely needs as many allies as possible to stay in power. Are these spending items Marysheva’s way of buying trust from other city staff and the labor unions? Whatever the reason, someone within Irvine city government is trying to hand cash and prizes to others within city government by shamefully using pandemic relief funds to do it. That is unjust.

Regarding the $2.3 million in kickbacks for city employees, one can only ask: If that money is allocated to employees, what wrong is being righted? Which employee saw a reduction in salary or benefits? How specifically were city employers harmed by the pandemic? Government positions have largely been unaffected by the pandemic. Most city, state and Federal employees still enjoy full salary, full benefits and the perk of full-time telework. In the city’s case, many city employees have the luxury of a pension, there were no layoffs, and salaries were untouched. Are we going to give three million dollars to pensioners who were never impacted by the pandemic?

Understandably, the Finance Commission plan has received some negative attention in lieu of these dubious spending items. The OC Justice Fund spoke at the Commission’s special meeting on September 27, requesting that these funds (and funds earmarked for athletic field renovations and drainage) be redirected toward non-profit legal services or to farmers who work in Irvine. Moreover, the Voice of OC recently highlighted Irvine’s proposed spending plan, asserting that City Hall upgrades were not even remotely related to the pandemic, and stating that the city is instead spending heavily on its own staff.

On October 12, 2021 at 4pm, Irvine City Council will be presented with the proposed plan during their regular council meeting. We will find out if the Irvine City Council will do the right thing and remove the self-serving items from the plan. If they do not, then public trust in our elected officials will further be diminished, and the spirit of ARPA relief funds policy would be seriously violated.