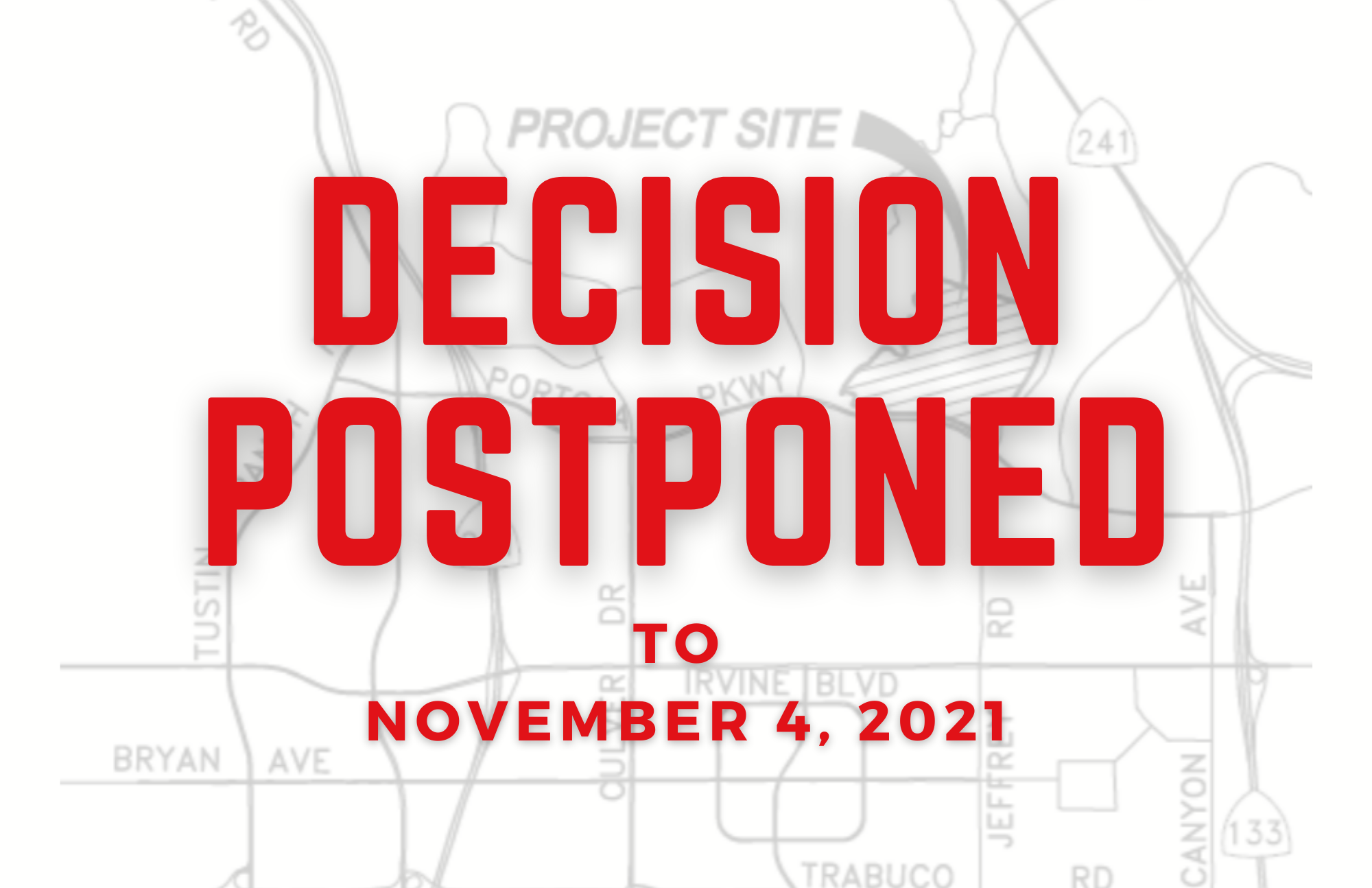 On October 21, 2021, the Irvine City Planning Commission voted 3-2 to postpone making a decision on the Irvine Company’s tract map and master plan proposal for Neighborhood Four of Orchard Hills, a neighborhood situated a half-mile away from an asphalt plant.

In what normally takes place with little fanfare at planning commission meetings, Irvine City Hall auditorium was packed with an assortment of Irvine residents, including high school students, local politicians, scientists, and lawyers. Most attendees came to protest the Irvine Company’s efforts to build 520 multi-million dollar single-family homes approximately a half-mile away from the All American Asphalt (AAA) plant – a plant alleged to emit high levels of toxins and odors into the air. Plans for the new neighborhood also include two private parks and a daycare site.

High turnout at this meeting was a clear sign of growing unrest among North Irvine residents who have reported foul and pervasive odors and smoke rising from the plant for years. The plant was originally built in 1993, far from existing homes, on land then belonging to the County of Orange. In the early 2000s, the city incorporated that land and the City of Irvine inherited AAA land-use permits to operate in the manner that it does today.

In 2005, the city approved construction of the Orchard Hills community, with minimal disclosures about AAA to future Orchard Hills homebuyers. Commissioner Mary Ann Gaido, at the conclusion of the October 21, 2021 meeting, admitted that in 2005, when she was Chair of the Planning Commission, nobody on the commission had much information about AAA prior to approving plans for Orchard Hills. However, since September 2019, residents have filed nearly 1,000 complaints with the South Coast Air Quality Management District (AQMD) about odors and emissions from the plant. AQMD and the city of Irvine conducted their own testing programs concluding that emissions are not hazardous. However, an independent review by researchers at UCI questioned the testing methodology used by AQMD and the city of Irvine, and concluded that the existence of potentially dangerous levels of chemicals in the air near the community could not be ruled out.

Public comments at the meeting were largely unified in asking the city to move or close AAA, prevent further developments near the plant, and provide further and more comprehensive air quality testing. Residents came out to share personal stories and described an odor so foul, they alter their outdoor lifestyle. Other residents spoke about black soot buildup near their doors and windows that they suspect were linked to asphalt emissions.

After more than three hours of public comments, the commissioners deliberated for an hour on hypotheticals, legal scenarios, and scientific studies. Jeff Davis, the Irvine Company representative, said that the housing plan met all requirements for approval, referencing an AQMD report concluding that toxic emissions do not reach dangerous levels, and claimed it was fundamentally unfair to penalize a property development for the possible wrongdoings and nuisances of a third party outside the development area. The commission collectively expressed frustration over AAA’s presence but noted the legal difficulty in forcing a private company to move when that company has met its land use obligations.

Planning Commission Vice Chair Stephen Huang, appointed by Mayor Farrah Khan, opened discussions with no mention of health and safety concerns. His line of inquiry centered on contractual obligations between the City and the Irvine Company. Chair Jeff Pierson, appointed by Councilman Michael Carroll, expressed similar concerns, but made note of one more pending AQMD air quality study that he would like to know the results of.

Commissioner Jong Limb, appointed by Councilwoman Tammy Kim, led discussions in favor of resident concerns over pollution from AAA, followed by support from Commissioner Gaido, appointed by Councilman Larry Agran. Limb expressed profound concern over the conflicting scientific studies on the air toxicity issue and called for more studies before moving forward with any decisions. Limb sought an indefinite halt to the new housing project but was not supported by his colleagues, who feared legal retaliation by the Irvine Company. Ultimately, the commission voted in favor of continuing discussions about the tract map and master plan approval through November 4, 2021.

The robust display of civic engagement by concerned North Irvine residents achieved a small win in preventing the Irvine Company from receiving approval to move the development project forward. However, once discussions resume on November 4, the petition may still be approved.

If you’d like to reach out to any of the Planning Commissioners before the next meeting, you can email them here: