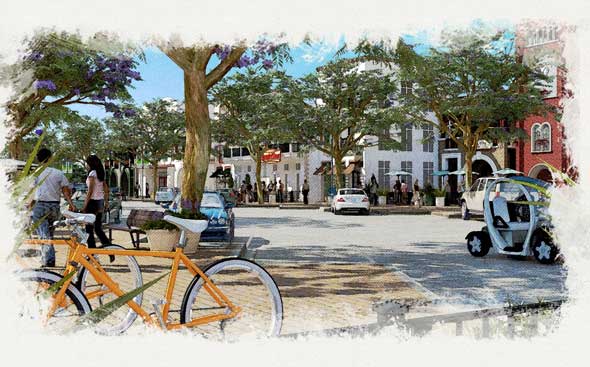 By 2007, market conditions had changed for the worst for homebuilders as well as most of the economy. In addition, the way utilities would be delivered to the homebuilding site changed. For these reasons, FivePoint stated that it needed a “new plan” in ts partnership agreement with Irvine and the Orange County Great Park Corporation.

On certain points regarding this new plan, FivePoint representatives stated that FivePoint had acted cooperatively with the City and Great Park board up to that point; therefore, some items did not need to be written down in the agreement. These FivePoint representatives, Patrick Strader and Emile Haddad, further stated that putting these items in writing would slow down the process. Therefore, they concluded that the Irvine city council should approve the new plan without these items included in the agreement document. In other words, the City and Great Park board should trust in FivePoint’s good faith. More on this will be in the next article in this series on Great Park development and entitlement numbers.

Main Street at the Great Park

In addition to the above listed items,  FivePoint included a Main Street business district in its plan. Main Street was planned in PA 51 near the northwestern edge of the Great Park. It would consist of shops going north from Trabuco Road, and it would have tree-canopied streets with wide sidewalks. This design would accommodate outdoor dining, cyclists, and pedestrians. Also, the tree-lined streets would provide shade and, thereby, reduce the heat-island effect.

Although ten-foot-wide streets were often the norm, Main Street as well as other streets in the Great Park would be narrower. This would allow room for the wide sidewalks as well as the trees. In addition, this street design would reduce traffic speed, which would make the streets safer for Great Park residents, cyclists, pedestrians, and car drivers. It would also make outdoor dining on Main Street a more enjoyable experience. Green Streets was the name used when referring to the proposed street design.

In August 2011, the Planning Commission recommended that the Irvine city council obtain FivePoint’s  participation in the following:

This is the fourth article in a series on Great Park development and entitlement numbers. Up next is “FivePoint’s Great Park Home-Building Entitlements: Irvine City Council Votes on the 2011 New Plan and Good Faith.”