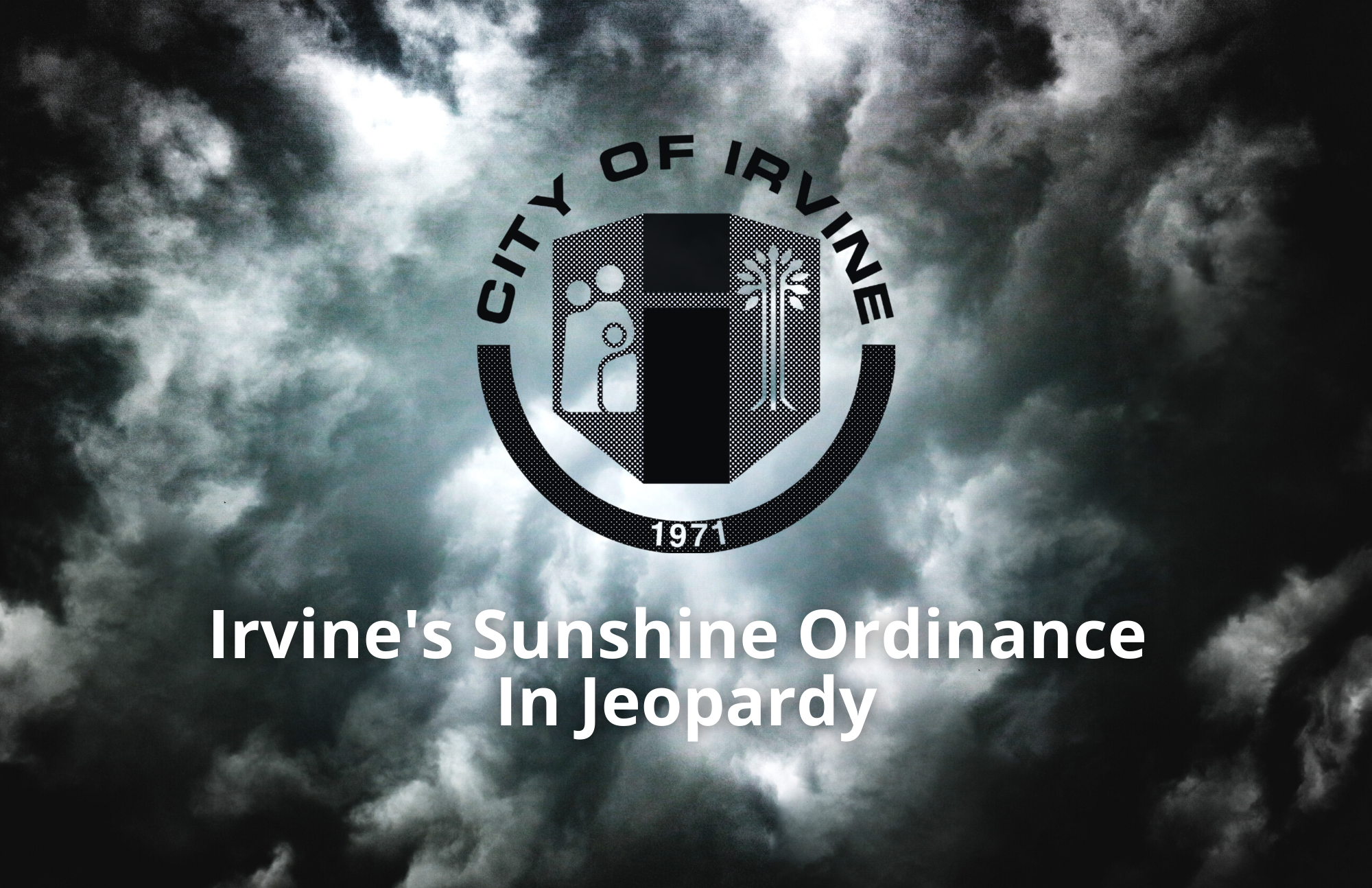 The proposal by Vice-Mayor Tammy Kim and Council Member Mike Carroll to eliminate Irvine’s Sunshine Ordinance is a radical departure from the city’s unanimous position in favor of the ordinance just three years ago. With American democracy under attack, any restrictions on the public’s right to know, government transparency, or citizen participation in the democratic process are dangerous and should be vehemently opposed.

On November 9, 2021, the Irvine City Council is scheduled to vote on Consent Calendar Item 2.8 (Ord. 21-14) to rescind Irvine’s Sunshine Ordinance (Ord. 18-10). The controversial proposal would roll back progress made on open government and return the city to meeting only the bare minimum legal requirements of the Ralph M. Brown Act. The Sunshine Ordinance gives residents and officials 12 days to review, study, and prepare for public meetings, while the Brown Act only provides 3 days.

This proposal is a significant step backward for the City of Irvine.

When the Sunshine Ordinance was initially considered by the City Council on October 23, 2018, as Agenda Item 3.1, the staff report read,

“The City, including its Council, its commissions, and its committees, exists to conduct the people’s business. That business is conducted most effectively when the public has the information and the opportunity to meaningfully participate in the city’s legislative and other decision-making processes. Informed participation is protected by assuring that:

(1) the public has advanced notice of business that is scheduled for consideration by the City Council and City commissions,

(2) the public has timely and reasonable access to information and materials that may be considered by the City Council and City commissions,

(3) the public has the opportunity to present opinions, viewpoints, and information to the city’s decision-making bodies, and

“To that end, City staff has assembled a proposed ordinance that significantly bolsters public transparency and the dissemination of information, so that citizens may be fully informed and retain control over the instruments of local government.’

After the Sunshine Ordinance was enacted, Irvine Watchdog wrote,

“Irvine Watchdog is thankful the City Council is listening to its residents. We’ve said it all along – transparency, accountability, and honesty make for good government… voters want more visibility, not less. We wholeheartedly support the spirit behind this new ordinance and hope that it represents the return of inclusive and transparent governance.”

As reported by the Voice of OC, Planning Commissioner Anthony Kuo, also a City Council candidate, said that the Planning Commission had to continue a vote because one commissioner didn’t have time to read all the reports on it. “We ended up continuing the item for two weeks … had we had the Sunshine Ordinance then, we wouldn’t have had to continue it,” Kuo said during public comment.

According to the Voice of OC, Councilwoman Melissa Fox said the more extended notice period [as provided for under the Sunshine Ordinance] would afford the council members more public feedback and allow residents more time to read through agenda reports and supplemental information.

“I was delivered three feet of documents on a Friday, for a meeting Tuesday evening,” Fox said. “So, the ability to get public input on these very important matters should be substantially increased.”

The Chamber of Commerce issued a statement on November 12, 2018, discussing the proposed two-year city budget cycle and wrote, “City Council approval of a two-year budget cycle would build on the recent Irvine Sunshine Ordinance, which promotes transparency by giving the public an agenda notice of 12 days – four times the minimum amount of time required by California law.”

In an editorial in the Orange Counter Register on October 22, 2018, by Irvine City Clerk Molly McLaughlin, wrote “a 12-day window provides every community member the logistical and timely opportunity to thoroughly review agenda items. The chances for all interested parties grow exponentially for pre-meeting discussions, sharing of information, and asking of questions. The pulse of an entire community can be felt across 12 days… Irvine is committed to the type of visibility all government watchdogs now demand – from this newspaper to the community member who wants to be fully informed, whether or not she or he attends a City Council meeting.”

In a press release issued on October 12, 2018, City Manager John Russo said, “The 12-day window allows every community member the time they need to review agenda items thoroughly… people and business owners who pay their taxes to run a good government ought to have the opportunity to share information, ask questions, and make their opinions known before City Hall acts on their behalf.”

Things have sure changed under the current city leadership.

Oppose the Roll-back of Transparency

The mission of the Irvine Watchdog is to advocate for transparency, honesty, and accountability. We agree with the comments made by city leaders in 2018, and we strongly oppose the retrograde effort to eliminate the Sunshine Ordinance. This alarming and undemocratic proposal will restrict public access and suffocate our right to know. Less government transparency is terrible public policy, whose only purpose is to help those with something to hide.

Therefore, we call on all members of the City Council and concerned residents to condemn and oppose this proposal. We salute members of the public who have already stood up to defend our rights against the political and special interest forces in Irvine that would prefer to operate in the dark.