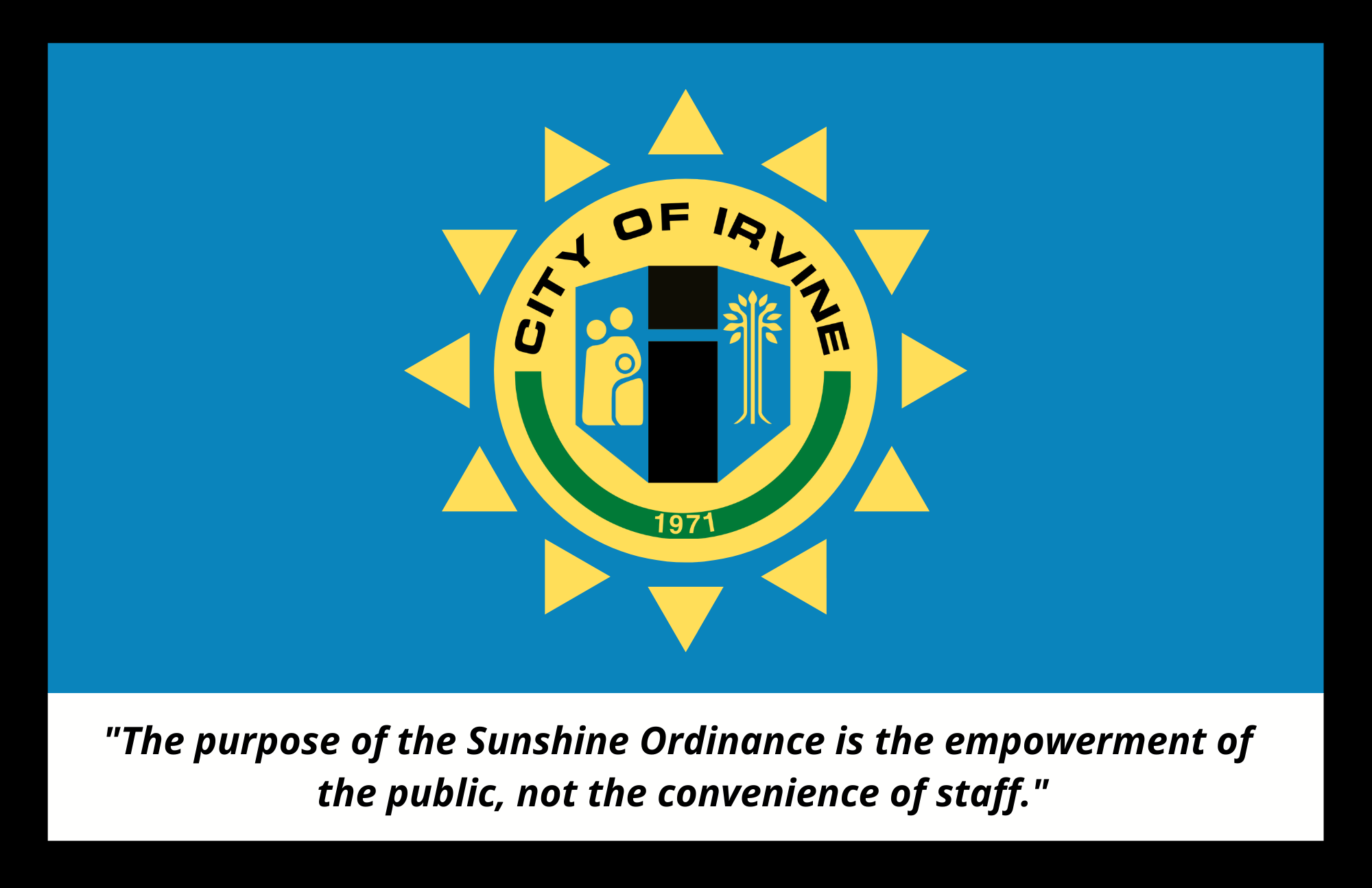 The latest battle in the Irvine City Council majority’s ongoing war on transparency and accountability will come to a head at its next meeting at 4:00PM Tuesday afternoon. On the “consent calendar,” which is likely to be taken up during the first hour of the meeting, is the final vote on a proposal to repeal the three-year-old Irvine Sunshine Ordinance, which generally requires publication of the agenda 12 days before a regular Council meeting.

The story of how final action on the proposal got on Tuesday’s agenda, ironically, serves as an object lesson on why the Sunshine Ordinance needs to be strengthened, not repealed. The proposal arose, seemingly ex nihilo, in a memorandum from Vice Mayor Tammy Kim and Councilmember Mike Carroll to the Interim Manager. The memo, dated October 19, 2021, requested that the repeal be added to the agenda for the Council meeting on October 26. The first reading of the item was then listed on the supplemental agenda published October 21—only five days before the meeting. The meeting ran long, and the Council didn’t get to this item until nearly 11:00 p.m., long after most members of the public in attendance had left. After a handful of public comments in opposition and little discussion, the Council voted 4-1 to advance the proposal to second reading and adoption. And so, the second and final reading is on this Tuesday’s agenda.

That’s not how the process is supposed to work.

Under the Sunshine Ordinance, the supplemental agenda is to be used in the event of an emergency, urgency, or other specified contingency requiring action in less than the normal 12 days. Clearly there is no urgent need to repeal the Sunshine Ordinance, nor do any of the other specified circumstances apply. Vice Mayor Kim and Councilmember Carroll, the proposal’s sponsors, didn’t even attempt to make such an argument. Thus, the repeal was illegally taken up at the October 26 meeting when it should have been agendized for first reading at the November 9 meeting.

Additionally, the second and final reading does not belong on the consent calendar, which allows a list of “routine” items to be voted on as a group. This repeal is anything but routine, and deserves separate consideration. Any councilmember can request that it be taken off the consent calendar to be separately considered, and the public should demand that this be done.

The above procedural irregularities belie the central argument offered by the proponents of repeal. In their October 19 memo, Kim and Carroll assert:

“These [Sunshine Ordinance] revisions were well-intentioned when adopted, but have proven unwieldy in practice. They effectively require that the agenda for an upcoming City Council meeting to be published only two days after the preceding City Council meeting has occurred. This compresses the timelines for completing agenda reports and often necessitates corrections and additions as part of the ‘supplemental agenda’ process. This multiplies the work required of City staff.”

Not so. This repeal proposal is one of many items considered by this Council that do not require action at the very next meeting. No harm would be done by scheduling them for the following meeting, three or four weeks out, which would give the public and councilmembers alike time to inform themselves and evaluate the merits of the proposal. The Sunshine Ordinance does not increase the work of the staff. What increases the staff workload is this Council’s penchant for circumventing the Ordinance by abusing the supplemental agenda process to jam items through illegally without adequate opportunity for public scrutiny. In any event, the purpose of the Sunshine Ordinance is the empowerment of the public, not the convenience of staff.

Council proponents of repeal also argue that other Orange County cities lack similar ordinances, and if the more lenient state Brown Act is good enough for them, it’s good enough for Irvine. This is a very peculiar argument to be advanced by politicians who never miss an opportunity to brag about Irvine being “Number One” or “The Best” at one thing or another. One would think governmental transparency is worth striving to be The Best at.

Moreover, one only needs to look to Anaheim for a real-time illustration of the perils of insufficient transparency. The City of Anaheim is currently embroiled in costly litigation over its sweetheart deal to sell Angels Stadium, and alleged Brown Act and Public Records Act violations are at the center of that litigation. The notion that without the Sunshine Ordinance Irvine would be just as good as Anaheim is not a comforting one.

At least one councilmember has gone so far as to claim in social media that Irvine’s Sunshine Ordinance is “unique.” Far from it. Cursory research reveals that at least nine California cities and one county passed some form of Sunshine Ordinance well before Irvine did. Not surprisingly, our counterpart university city Berkeley enacted one of the strongest such laws, requiring a City Council Agenda Committee to meet 15 days prior to each Council meeting to determine the agenda for that meeting. It then requires the City Council Agenda Packet to be distributed and published 11 days prior to the meeting. Only under two specific circumstances may items be added to the agenda up to five days before the meeting.

So Irvine’s Sunshine Ordinance is not unique. It’s not even the strongest such ordinance in California, and Irvine could benefit from some of the enforcement mechanisms found in the ordinances of other cities. The Council needs to scrap this ill-conceived repeal effort. And then it needs to get to work strengthening our Ordinance. Among other things, it needs to end the serial abuse of the supplemental agenda process and enact stern accountability measures for those who subvert the public’s right to know.

Attend the City Council meeting this Tuesday, November 9, 2021, in person or via Zoom.

Additional information and ways to participate in the City Council meeting can be found HERE.