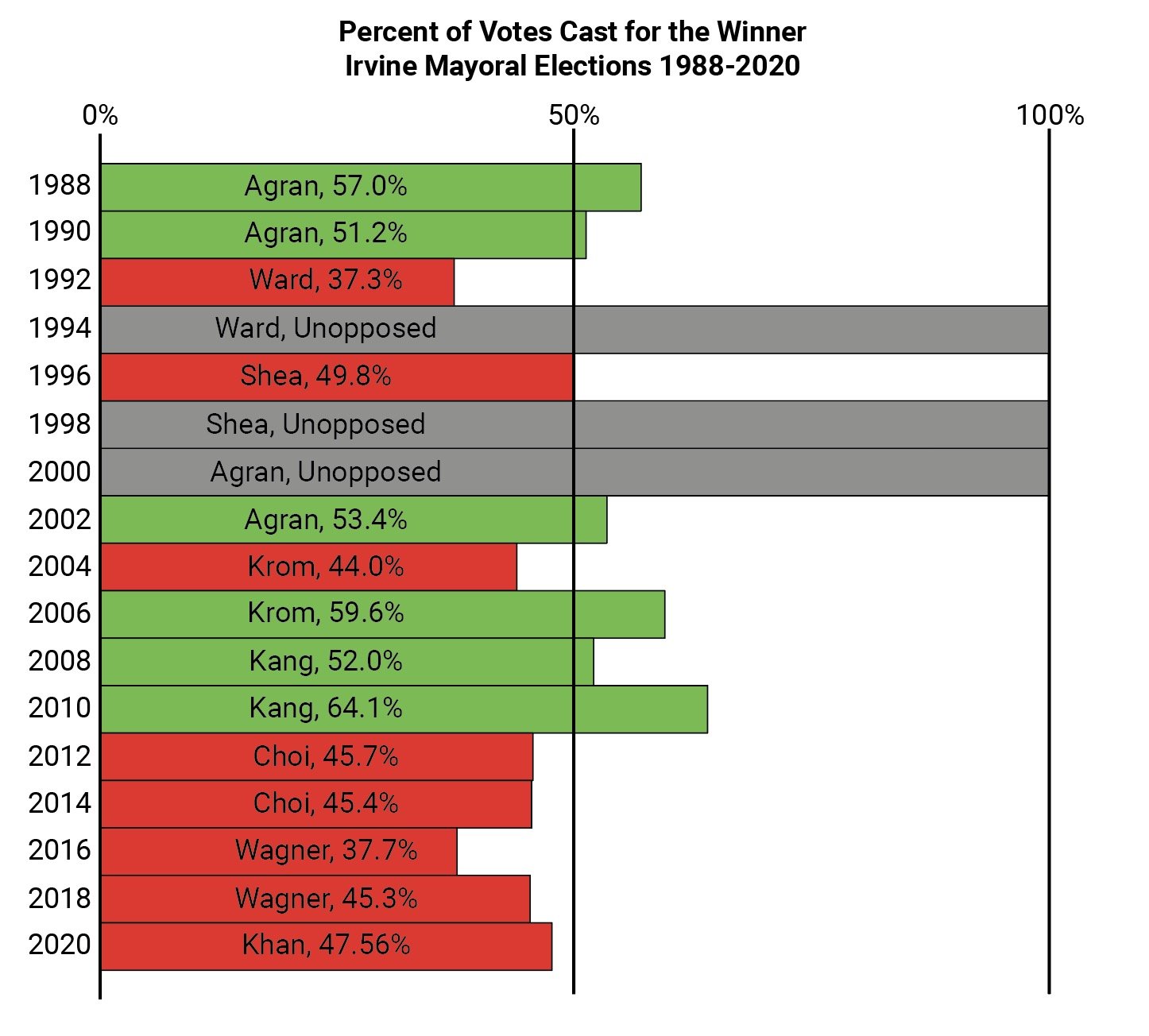 There’s a saying that poses a warning to consumers of media: “if you’re not paying for the product, you’re not the customer; you are the product.” It’s a useful reminder to be wary of your relationship to the powers-that-be in that particular market. If there is a rough political equivalent to it, perhaps it is suggested by a reality of Irvine mayoral elections that you might not be aware of. And that warning is this: if you’re not insisting on democratic government, there’s a very good chance that you don’t have one.

That’s because in 8 of the last 17 elections for Mayor of Irvine, the victor won the election without a majority of votes cast. That’s more than half of the mayoral elections in which the victor didn’t run unopposed, and it includes the last five elections for the office. And that means that, all too often, the person presiding over the City Council — the person with the most power over its agenda and debate — was not truly beholden to the electorate in any meaningful way.

Pick a controversy or a cause: the Great Park, the Veterans Cemetery, over-development, traffic, All American Asphalt. We have now gone almost ten consecutive years without a mayor with a popular mandate. If you found our municipal government curiously unresponsive to the appeals of our residents over the last decade, the above graphic may be a clue as to the reason for it.

Perhaps the most egregious affront to our sovereignty over the last three decades happened in the aftermath of the 2018 election, in which Christina Shea – a councilmember who had been elected in 2016 with only 20.2% of votes cast – assumed the office of mayor without being elected to it, after Donald Wagner, who had just been re-elected as mayor with only 45.3% of votes cast, left office to join the Orange County Board of Supervisors. During that time, whatever your position on where the Veterans Cemetery ought to have been built, Irvine didn’t exactly cover itself in glory.

This should not be a partisan issue. First and foremost, all Americans should support government by the consent of the governed. And, happily, there are easy solutions that both parties, and all Irvine residents, can and should endorse. The answer is a runoff – either using a primary election to narrow the field followed by a general election, or by using one of a number of instant-runoff voting systems for a single election.

Dr. Kev Abazajian, UCI Professor of Physics and Astronomy and the Chair of the Democrats of Greater Irvine, agrees. “I personally support ranked-choice voting as an instant runoff method. In addition, the California Democratic Party also supports ranked choice voting as part of its platform for reducing the influence of money in local elections,” says Abazajian. “I think it’s a tragedy for democracy to have candidates win with a minority of votes cast and without a clear majority mandate.”

At the time of publication, I was unable to reach a local Republican party officer or elected official for comment. But I know from experience that Irvinites of any party tend not to be passive citizens. We care about our community deeply, and we recognize that the political process deserves our active engagement as our primary means for protecting that community and securing it for posterity. I do not doubt that this dire need to improve our democracy transcends partisan politics.

Democracy will never be perfect. There are always winners and losers. But, at the bare minimum, it’s meant to ensure that the majority of the electorate has endorsed those who govern us. Absent that, elections are meaningless. And if more people voted against those who assume office with the frequency of a coin flip, that’s not democracy, and we’re not calling the shots. We often proudly proclaim that Irvine is a master-planned community. But that planning can go very wrong if we’re not picking the people doing the planning and assured that they’re planning for our benefit.