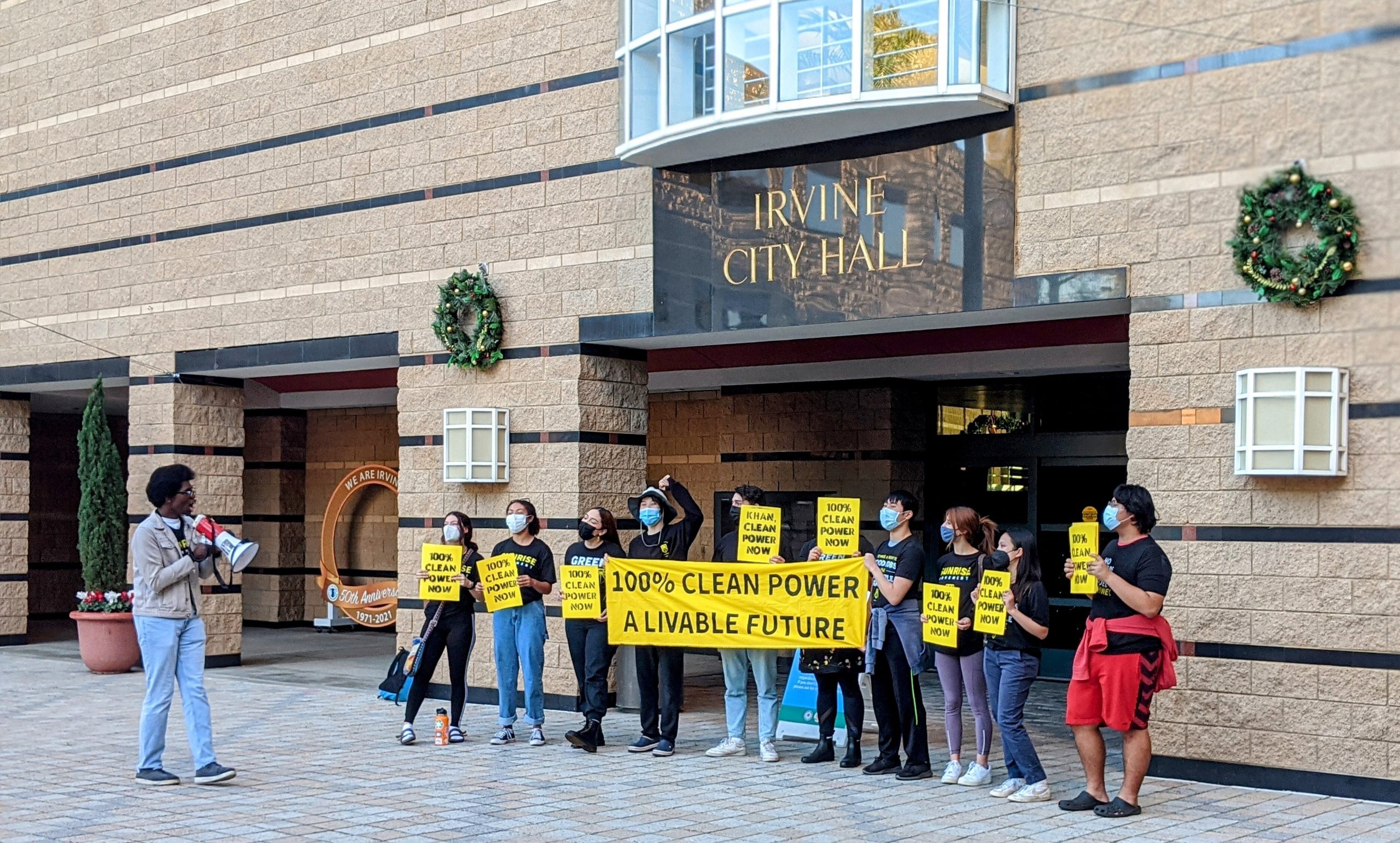 Irvine has always beckoned parents and children with the promise of a thriving future through its schools and other amenities, and prides itself on being the safest city in the United States. However, four of the Irvine city council members have not used the most powerful tool they have to protect young people from the greatest threat the planet has ever seen. The threat is the climate crisis and a major key to stopping it is 100% clean electricity.

On Nov. 23, youth from all over Orange County brought the climate emergency to the Irvine City Council. The action was planned by the OC chapter of the Sunrise Movement, a nationwide youth-led organization focused on combating climate change, calling for good jobs with livable wages, and ensuring that leaders stand up for the health and wellbeing of all people. Their simple request was emblazoned on banners at Irvine City Hall: “100% Clean Power, A Livable Future”.

Accommodating this request is very much within the power of the Irvine City Council through the OC Power Authority (OCPA), the new not-for-profit public power agency that will provide all Irvine electricity users with power beginning next year. Each participating city’s City Council — Irvine, Huntington Beach, Fullerton, Buena Park — will choose a default product that all energy users in the city will be opted into in 2022.

Under California law, OCPA customers may at any time choose to opt into a different OCPA product with more or less renewable energy or to switch back to SoCal Edison for power generation.

In the days before the Nov. 23 Irvine City Council meeting, Councilmember Larry Agran tried to agendize discussion of 100% clean energy as Irvine’s default product, but it did not receive a second from another Irvine councilmember, which is necessary for it to be placed on the agenda for a vote. OCPA currently plans to launch in April of 2022, so Irvine will need to determine its default product by the end of January, if not sooner in order to meet customer notification requirements.

The people of Irvine deserve more than the bare minimum of 38.5% clean energy, but that is where the council stands as of now. Irvine will not meet its ambitious 2030 zero carbon goals and will fail to be a climate leader if they settle for the minimum option. They must listen to these brave young voices and take a stand for the future of Irvine’s children and the health of all Irvine residents.

The climate crisis has affected the safety of Irvine residents first-hand this year. The Silverado fires caused Irvine residents in almost half the city, including Northwood, Portola, and the Great Park, to evacuate from their homes. Orchard Hills residents recounted seeing flames and smoke threaten their homes and scorch hillsides in their community. More recently, beaches and businesses in Newport, Huntington Beach, and Dana Point closed due to 25,000 gallons of oil spilled into the Pacific off Huntington Beach.

Should children have to stand up for their right to a livable future? They have no choice but to do so.

At 9am on November 23rd, just hours before the Irvine City Council meeting, youth representatives from Sunrise Movement OC spoke during the Orange County Power Authority meeting discussing an upcoming vote on clean energy products for the participating cities of Irvine, Buena Park, Fullerton and Huntington Beach. The youth encouraged OCPA to make 100% energy the default product for residents in the 4 OC cities.

A wealth of research from institutions including UC Irvine, Princeton, and Harvard, find that socioeconomically disadvantaged groups are disproportionately impacted by the effects of the climate crisis. The speakers from Sunrise OC advocated for OCPA and city governments to request state funding for subsidies for residents who cannot afford the 100% renewable product.

Following the comments of the youth, some small steps toward clean power were made. For the first time, the board discussed revising OCPA’s founding document to remove commitments to the minimum renewables product. In addition, the OCPA board voted unanimously for three products: ~38%, 100% and a third product in the middle–around 70% renewable.

At 3pm on Tuesday, November 23rd, the youth of Sunrise OC held an action in front of Irvine City Hall. Voices of the youth united in songs and chants. Youth leaders gave speeches on the importance of providing Irvine with 100% clean energy and all the effects of the climate crisis through which Irvine residents and the rest of Orange County have endured. The youth sat in the Irvine City Council meeting among their fellow OC residents, ready to provide testimony.

During the meeting, revelations about Irvine City Council’s true stances took place. The Council revealed that they have $5 million invested in Exxon Mobil, well known for unclean energy and pollution due to fossil fuels. In the presence of the Sunrise OC youth, the council voted 3-2 on a $5 million divestment from Exxon, opposed by council members Anthony Kuo and Mike Carroll.

The dedicated youth were among the last left in the council meeting at 9pm to give public comment. They emphasized the importance of a 100% clean electricity default product for all energy users through OCPA. They shared being locked in their dorms or evacuated from their houses with their younger siblings due to the Silverado fires. Other members highlighted the availability of solutions the council has not discussed, such as subsidizing affordable home energy alternatives like grids and battery technologies.

Sunrise OC advocated for the council to put “people over profit”. The city of Irvine is home to many business owners who are also parents—they deserve to know that they are contributing to an Irvine economy that does not endanger the future of their children.

Will Irvine provide the best power resources for our residents and be the climate leader they are deemed to be?

Rachel Abalos is an Irvine resident and college student. She is a member of Sunrise Movement OC and several associations in Irvine promoting the prioritization of public health research and wellness in public policy.