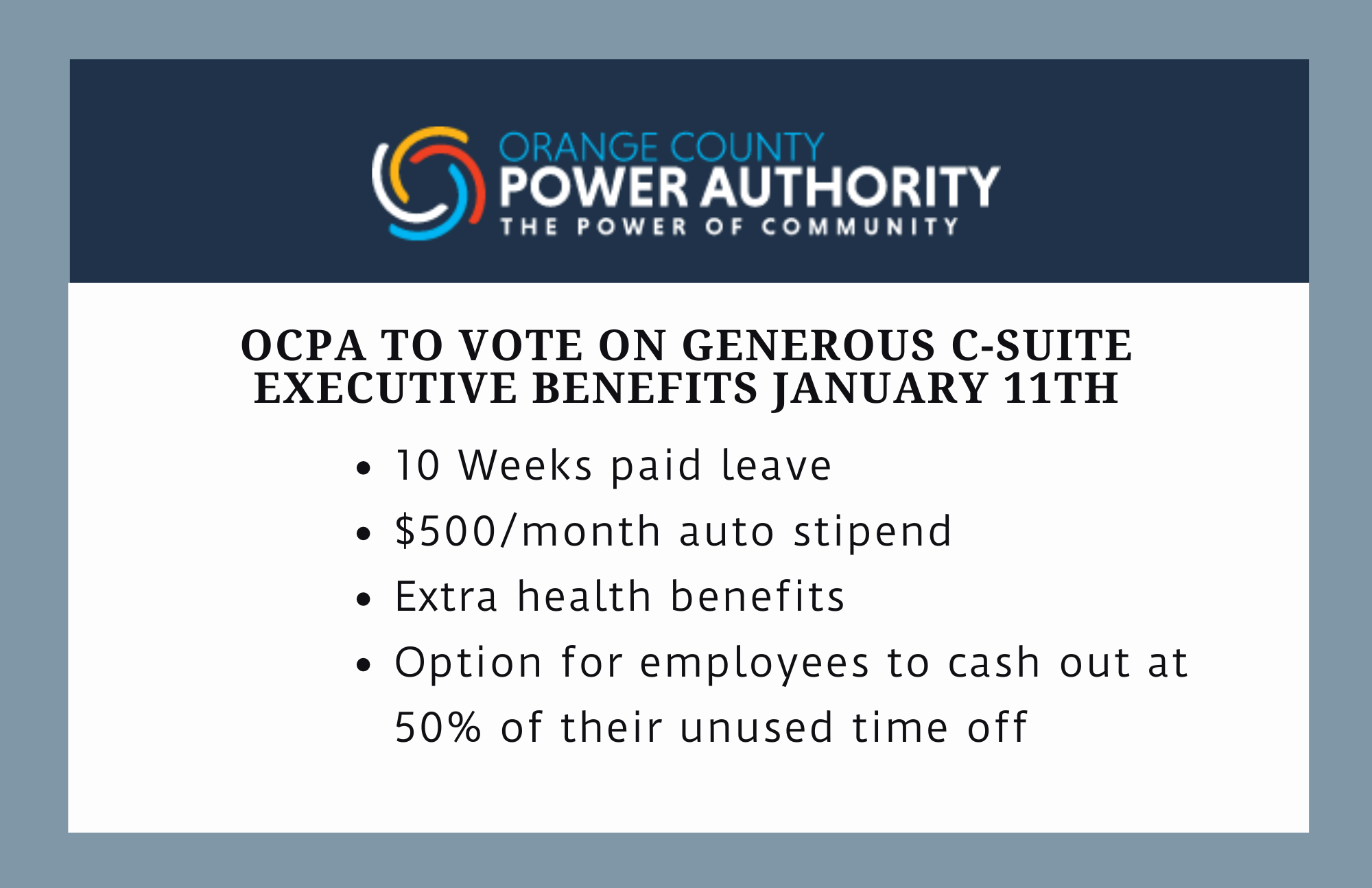 On Tuesday, January 11th, the OC Power Authority (OCPA) board of directors is expected to consider a personnel policy with generous benefits for CEO Brian Probolsky and other executives that will be paid for by Irvine taxpayers and borrowed credit for the first few years of the program. The benefits exceed those of other Community Choice Energy (CCE) programs in California.

Under the proposed policy, “C-level” executives will start out with more than 10 weeks paid leave – 80 hours more than other employees, along with a $500/month auto stipend, extra health benefits and an option for employees to cash out 50% of their unused time off.

CEO Probolsky, who has no experience in the energy industry, no college degree, and recently brought significant risk of litigation to OCPA due to his behavior toward recently-resigned COO Antonia Castro-Graham, currently draws a salary of $239,000 — $87k/year higher than it was in 2020 when he worked at the county. Probolsky, a long time political operative served as chief of staff to three different Orange County supervisors.

OCPA will use Irvine taxpayer money and borrowed credit to pay for the executive benefits for the next few years until the program generates enough revenue to pay for them.

The personnel policy also gives the CEO unilateral and unlimited discretion to blacklist and fire employees, according to Irvine resident Doug Elliott who said during the meeting that in 45 years as a labor attorney, he has seldom seen such an anti-worker personnel policy.

Clergy & Laity United for Economic Justice (CLUE) sent a letter to the OCPA board of directors on Friday, January 7th raising concerns about the policy and Probolsky’s “OCPA Leadership Bullying & Proposed Benefits.”  Other organizations recently sent similar letters raising concerns about OCPA including the National Women’s Political Caucus Orange County and Women for American Values and Ethics called for an investigation of OCPA workplace harassment and inequity.

According to the Voice of OC, at the board’s December 21 special meeting discussing employee benefits, multiple board members spoke up and said that everything is different at the agency because it’s not a regular public agency, despite being funded exclusively by Irvine taxpayers at this time.

“We’re not in a typical public agency,” said board chair and Irvine City Councilman Mike Carroll. “This is not a civil service…this is about as private as a public agency can get.”
Board member Mike Posey agreed with him. “Our income comes from the ratepayers, not the taxpayers.”

The table below compares the benefits proposed by OCPA to those of three other CCEs — 3CE, Silicon Valley CE and San Diego Community Power.  According to the staff report, OCPA consulted 3CE and SVCE’s policies as they created their policy.  The OCPA staff report also says they consulted East Bay Community Energy, but we could not find the EBCE employee handbook or summary of benefits.

Benefits that are the most generous of those compared or disproportionately benefit C-level executives are in bold .  A few of the benefits tied for first.  Click on the links at the top of the table to see source documents.

The Voice of OC reported, the power authority is set to hit the ground running at the start of this year, with plans to set their official rates on January. 11. While agency leaders have claimed over the past several years the authority would be able to offer power at slightly lower prices than Southern California Edison, it remains unclear if they will be able to follow through on that promise.

Member cities will also be choosing which of the three power options to offer their residents as the default option, giving residents a choice of 38%, 70% and 100% renewable energy.

The agenda for the January 11th OCPA meeting can be found here. To attend the meeting via Zoom click here.

Correction: Information regarding San Diego Community Power’s executive benefits has been updated based on a comparison of their October 2020 Benefits Comparison chart and their January 2021 Exempt Employees Benefits Summary.