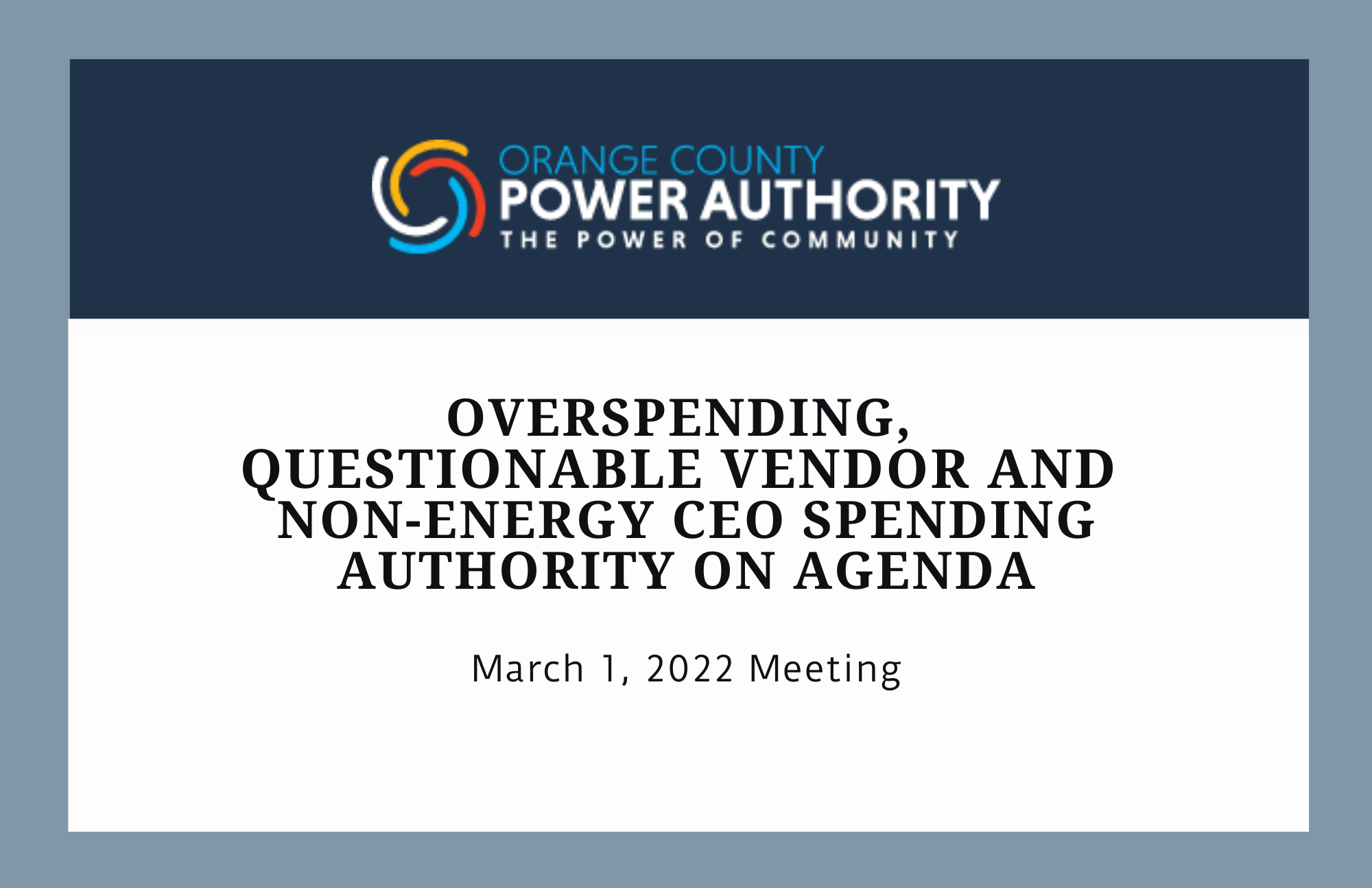 The OC Power Authority agenda for Tuesday, March 1 includes $446,000 in over budget legal spending, a commitment to pay $260,000 to a marketing vendor with no marketing experience, and authorization for the CEO Brian Probolsky to spend $125,000 on non-energy expenses without board approval.

According to a budget update in the report, OCPA’s legal bills will be $446,000 over budget for the fiscal year, and contract services will be $234,000 higher than anticipated. The report says, “As of June 30, 2022, legal services are forecasted to be $446k higher than anticipated primarily due to a number of PRA requests, non-legal services such as Board Clerk support during the first six months of the fiscal year, and legal support regarding other unanticipated matters.” No other explanation of the unanticipated legal matters is provided.

Additionally, the report states, “There will be an expected increase in legal expenses to support the voluntary allocation and market offer (“VAMO”) process with Southern California Edison (“SCE”) and San Diego Gas & Electric (“SDG&E”) and long-term renewables portfolio standard (“RPS”) negotiations from February to June 2022.” However, according to the report, “It is not unusual for legal and other professional support services to be higher than the original estimate during the year in which a CCA is commencing operations due to a heavier reliance on professional support as the management team is brought on board and key policies are adopted and put in place.”

Rob Howard of Zodiac Solutions will be paid up to $260,000 over the course of two years to do marketing, communications and PR work for OCPA despite having no experience with any of those tasks, according to his bio, which says Howard has worked as a nuclear operator doing plant maintenance at the San Onofre Nuclear Generating Station for over 30 years. According to the staff report,

“among the finalist companies, the Zodiac, Reveille, GoldenComm team presented the greatest alignment with desired outcomes. The team was ultimately selected on the merits of their experience providing Media, Marketing, and Communications services, their ability to tailor their proposal to the needs specified in the RFQ. The team demonstrated an innovative approach to creative marketing and branding ideas. Their team showed passion and alignment with OCPA’s values and a willingness to be flexible and nimble while working with OCPA during our critical start-up period.”

Another contract with Reveille, Inc., which appears to have marketing experience, says that Reveille will be paid $590,000 for marketing.

“Since the RFQ and selection, the three firms have operated under Contracts within the Board approved Delegated Contract Authority Policy (Attachment E). Staff is bringing this item to the Board for approval since it is anticipated that ongoing services provided by these firms in support of the commercial and residential launch would exceed the Delegated Contract Authority Policy. Therefore, Staff is requesting this approval to allow the team to provide an uninterrupted scope of services which are related to launch activities.”

A Delegated Contract Authority Policy slated for approval allows the CEO Brian Probolsky to spend $125,000 on non-energy expenses without board approval, though he would be required to tell the board about expenditures over $50,000 at the next board meeting.

For Zoom link to attend the meeting or read the staff report, click here.