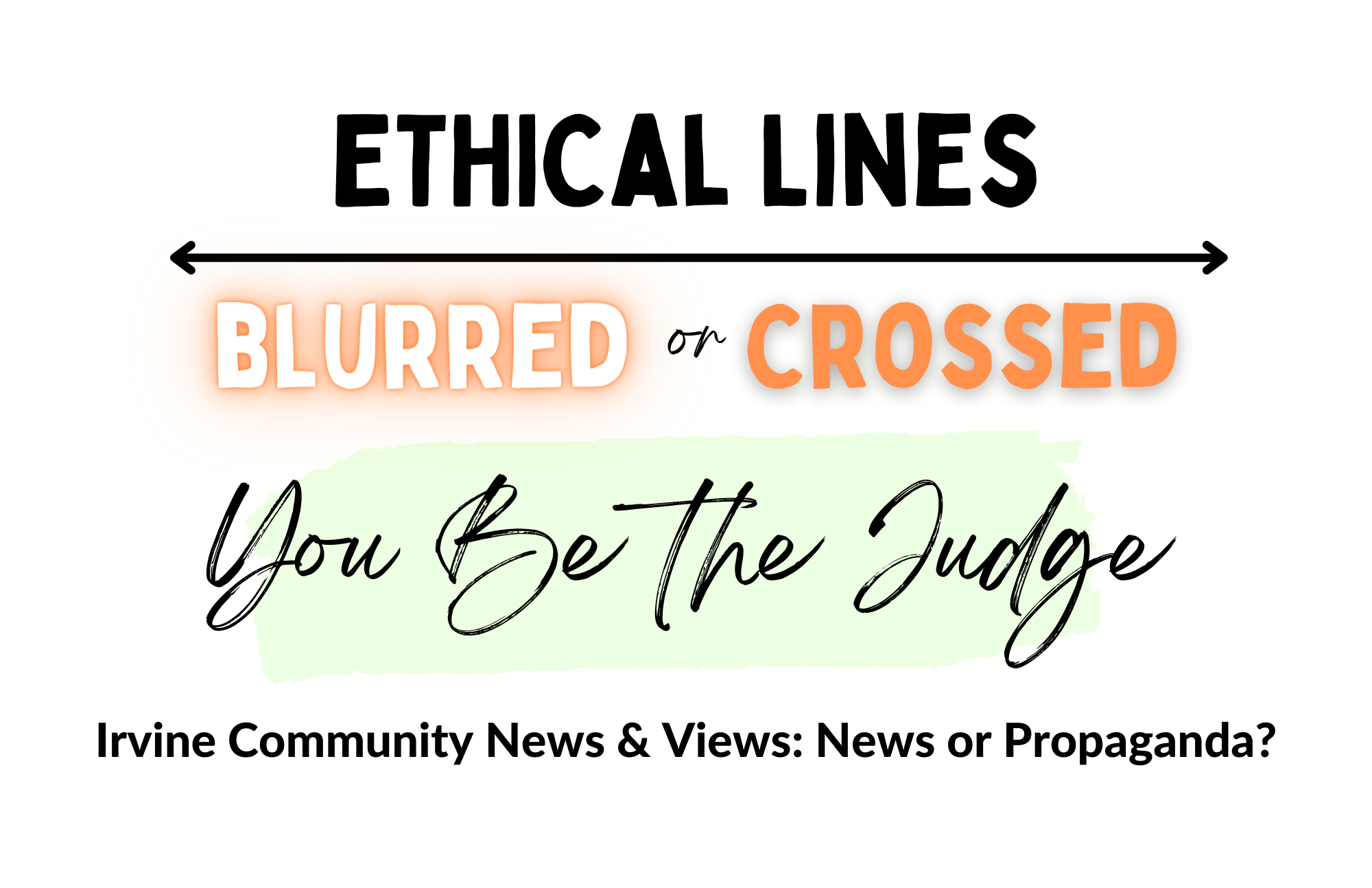 According to a 2021 LA Times article, ICNV is “backed by” Councilmember Larry Agran, who has a 4% financial stake in the paper. The article further stated Agran “helped the paper get started” in 2014. Councilmember Agran credited publisher and friend Frank Lunding with running the newspaper and writing editorials.

According to the LA Times, Frank Lunding is a resident in the City of Monterey, California. Further search reveals that there is no person with the last name Lunding registered to vote in the county of Orange. Why is somebody who is not a resident of Irvine, let alone Orange County, opining on political matters pertaining to the City of Irvine?

Furthermore, according to the same LA Times article, Councilmember Agran’s daughter-in-law, Kerrie Agran, is listed as the Chief Operations Officer and Calendar Editor in the print editions as “Kerrie Mahan” and state records show that the newspaper is registered under a “Kerrie Mahan Agran.”

One of the contributors to ICNV is Phyllis Agran, MD, MPH, the wife of Councilmember Larry Agran. Another contributor to ICNV is Joel Smith, who was paid by the City of Irvine as Councilmember Agran’s Council Executive Assistant (CEA) from August 24, 2021 until December of 2021. However, many of the articles in ICNV do not indicate an author and instead show a byline as “ICNV Staff.” Who is behind these anonymous articles?

According to the LA Times, Frank Lunding “refused to disclose how the newspaper is funded.” Notably, in 2017, ICNV received a substantial payment from the City of Irvine. This payment was a result of a lawsuit that the City of Irvine settled.

In 2016, the City of Irvine prohibited ICNV from being distributed at City Hall. Consequently, ICNV sued the City in Federal District Court, alleging “violation of the newspaper’s First Amendment rights to freedom of speech and freedom of the press.” In June 2017, the City of Irvine settled the lawsuit, paid ICNV $350,000, and agreed to allow the paper to be distributed at City Hall and other City facilities once again.

Is this settlement money being used to continue ICNV’s operations? ICNV also receives funding from advertisements.

Though many articles are community-based, ICNV is also used as a platform to support or oppose elected officials and candidates through print and social media. Articles are written to influence voters much like independent expenditures paid for by Political Action Committees (PAC). Information on how to track independent expenditures and political action committees can be read here, Dark Money in Irvine Elections.

According to federal and state regulations, an independent expenditure (IE) is a political campaign communication that expressly advocates for the election or defeat of a political candidate(s). Examples include mailers, commercials, social media advertisements, signs, and posting signs.

Currently, individuals can contribute a maximum of $550 per person toward an Irvine City Council candidate. However, anyone or any group can contribute unlimited amounts of money to a Political Action Committee to support or oppose a candidate with an independent expenditure. See example below.

Even though certain ICNV articles advocate for or against certain candidates, the newspaper is not required to disclose financial contributions the way IEs are required to by law. Essentially, certain ICNV articles function as an independent expenditure for political purposes, but does not have the campaign finance requirements to disclose or report its sources of funding.

Were Ethical Lines Blurred Or Crossed?