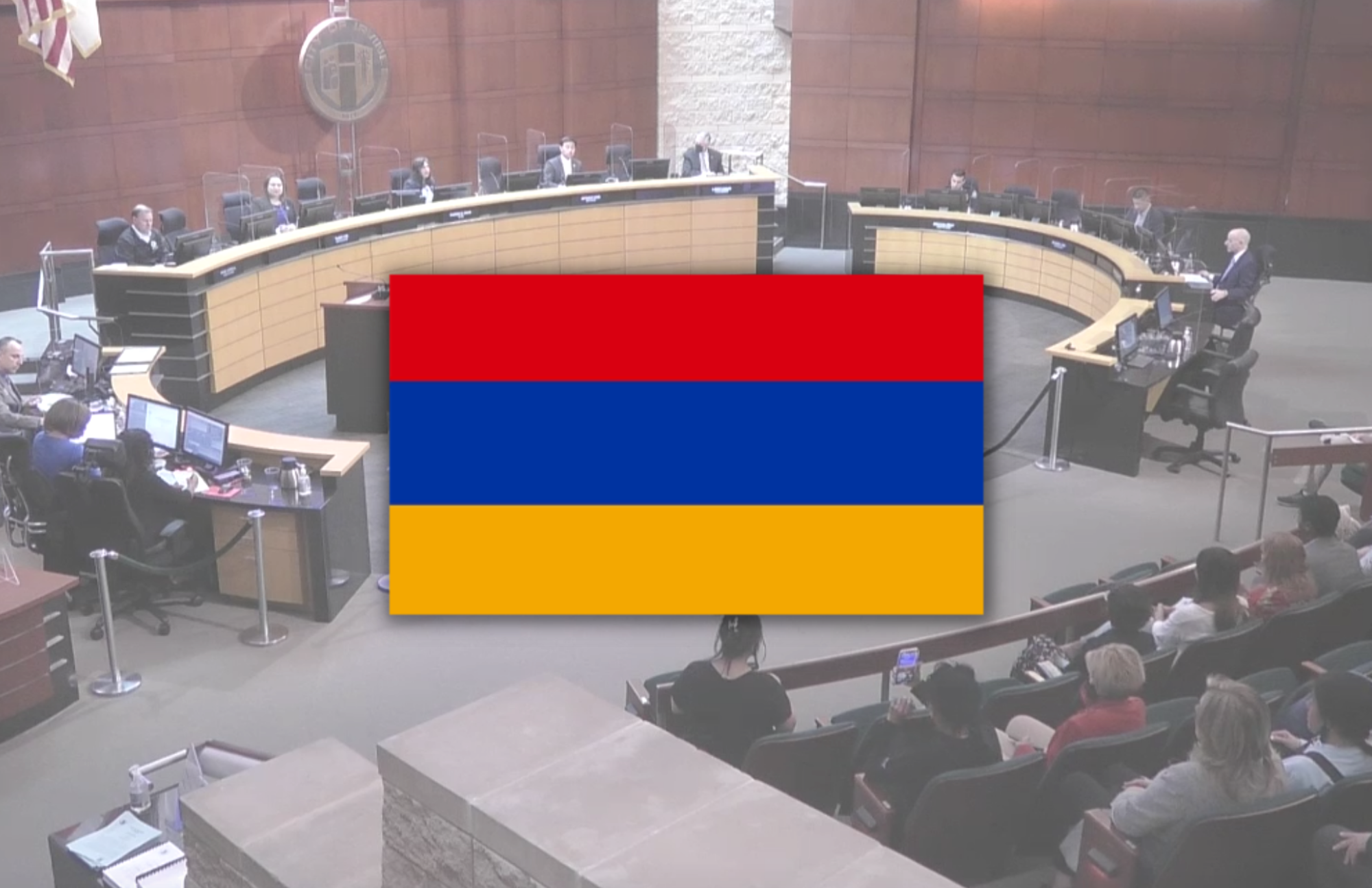 The Armenian Genocide occurred under the rule of the Ottoman Empire from April 24, 1915 to 1923. In 1915, there were approximately 2 million Armenians, but by the end of the genocide fewer than half a million remained with approximately 1.5 million perishing during the genocide.

In March 2022, a video was discovered of Mayor Khan in a meeting with noted genocide denier Ergun Kirlikovali. Further investigation revealed Mayor Khan appointed Ergun Kirlikovali and Erkan Demiragci, the President of the OC Turkish Americans Association, who is also a genocide denialist, to her Mayor’s Advisory Committee. The Mayor’s Advisory Committee is an unofficial committee selected by and administered by the Mayor. Kirlikovali also donated to Khan’s  2022 mayoral campaign, 2022 city council campaign (Khan opened both committees for 2022), and her 2020 mayoral campaign.

This prompted a series of events including social media responses from Mayor Khan (see Khan’s 3/23 video response, 3/24 video response, 3/27 letter response), division among local Democratic clubs, censuring of the mayor by Democrats of Greater Irvine, and appeals to the Democratic Party of Orange County to not endorse Khan for mayor by the Southern California Armenian Democrats (appeals which were unsuccessful).

The agenda for the council meeting included a proclamation to make April 24, 2022 “Armenian Genocide Remembrance Day.” It is unclear whether this proclamation was already planned or in response to the above occurrences.

The members of the Armenian community from Irvine and surrounding cities were present and came forward to both express their anger and disappointment with Mayor Khan’s actions and to provide recommendations for making amends.

The initial speakers during the April 12, 2022 City Council meeting requested alterations to the proposed proclamation to be every year, not just this year, and to include the specific refutation of genocide denial — a clear reprimand of the mayor’s associations.

“My family have been Irvine residents since 1977. Currently I am the Chair of the Armenian National Committee of America Orange County chapter. Whilst we welcome this resolution, I’d like to make some changes, particularly to the last clause as I believe it makes it more earnest:

“Now therefore the city council of the city of Irvine does hereby proclaim April 24, 2022 and every subsequent April 24  as the Armenian Genocide Remembrance Day and calls up on all people of goodwill to reject efforts to enlist, engage, or associate with those who continue to deny the genocide and the monstrous crimes against humanity that have long been matters of historical fact.” Thank you.”

“I am here in support of the Armenian Genocide Remembrance Day Proclamation amendment requests. These were submitted to the Irvine City Council on April 12, 2022 to modify the first clause to read: Whereas the Armenian Genocide was conceived and carried out 1915-1923 resulting in the deaths to 1 and half mill Christians, Assyrians, Greeks, and Armenian men, women, and children who were marched to their deaths and replace the third clause with: Whereas the United States has officially recognized the Armenian Genocide beginning with  President Harry S. Truman’s administration submitting the written statements to the international court of justice regarding convention on the prevention and punishment of the crime of genocide.. And modify the last clause as: Now therefore, the City Council of the City of  Irvine does hereby proclaim April 24, 2022 and every subsequent April 24 as the Armenian Genocide Remembrance Day and calls up on all people of goodwill to reject efforts to enlist, engage, or associate with those who continue to deny the genocide and the monstrous crimes of humanity that have long been matters of established historical fact.”

“I am an elected member of the 40 Martyrs Armenian Apostolic Church Board of Trustees in Orange County. I am here to comment…As leaders we are here to lead by example.. We have a calling to promote equality. The Armenian Genocide is an undeniable historical fact… Governments and parliaments of 33 countries around the world have recognized the genocide. Mayor Khan, you have the opportunity to make things right by supporting the resolution and supporting a program to teach students about the Armenian genocide so it will never happen again in this world.”

“As a resident of Irvine and chairman of the Irvine relief society we are very disappointed and hurt by the mayor in the video when she joined in ridiculing 1 and a half million victims of the Armenian genocide. It has no place in Irvine or any civil society. The fact that it can still occur today is very disturbing. April 24 should be considered and cutting all ties with genocide deniers and teaching the genocide in the schools and sponsoring a training day for social study teacher.”

“The people of your city should know something.  You might have done a lot and made the DEI inclusion community, but I also want to comment on the people who came in supporting you and maybe help educate them a little. The genocide involved the slaughter of my dad’s grandparents and grandmothers and my great grandfathers and it would be a shame on me to not come here and denounce this. I see you guys nodding like I wish this was over… Maybe instead of blaming us for coming here and standing up for ourselves, maybe you blame your colleague Mayor Khan for her words. I can’t express my disgust enough… “

There were also calls for conciliation with understanding of the suffering of the Armenian community:

“I just want to take a moment to recognize all the pain and hurt in the Armenian community and the supporters today. I cannot even imagine what it is like to carry the trauma of genocide. We have to find a way to move forward in love. The comments I am hearing this evening do not portray the mayor I know. What I would express is the desire to heal the harms and hurts that I am hearing. I know that I can count on you mayor Khan to move forward peacefully and with compassion.”

“… For the record. I made no disparaging remarks about any Armenian or Armenian communities. Those are not my words. I have never done that. And to add on, I have made sure that I do not have any member that is denying the Armenian Genocide. Not only that, I have donated $1,500 dollars to the genocide education project. And I look forward to scheduling a meeting.  I am a little behind but we will get a meeting scheduled to continue the conversations and move forward. My colleagues and I will move forward to declare April 24 a day of remembrance of the Armenian Genocide and we will make sure we add the amendments that were presented tonight. And, as I have stated before I will state again that I stand with the Armenian community and as an ally to the Armenian Community, I will continue learning from your experiences. The contents of this letter will not solve all of our challenges, but I hope it serves as the beginning of an ongoing relationship. So, thank you.”

The grievances of the Armenian community regarding the leaked video as well as other issues raised during the meeting will hopefully be addressed by the Mayor as promised. Addressing these issues will result in a more inclusive community that recognizes the atrocities experienced by one of our minority populations and give validity to the many who came out to speak. Will the Mayor keep her word?