Silencing Voices in the Name of “Civility”. Do Irvine Unified School District Board Policies Go Too Far? [Opinion] 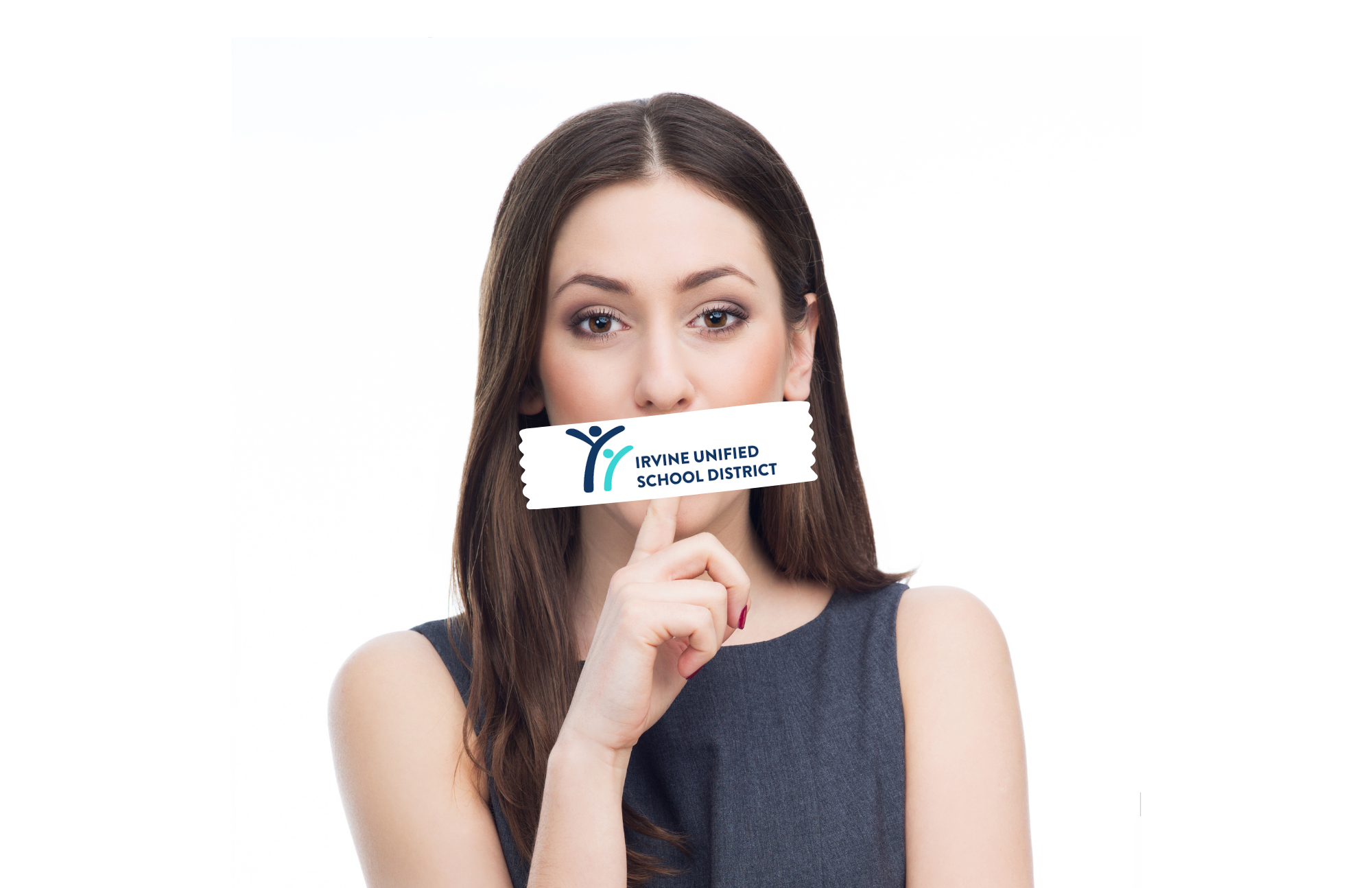 School boards all over the nation have seen an increase in public participation. How board members have handled passionate speakers has been fodder for national news.  The Irvine Unified School District (IUSD) has thus far escaped such scrutiny – that is until last week, when IUSD board president, caught the eye of the American Civil Liberties Union (ACLU), a national civil rights organization.

In a letter sent to the IUSD School Board on May 24, 2022, the ACLU cited multiple violations of free speech.  The ACLU admonished IUSD’s Board Bylaw 9323 “Conduct of Public Meetings” which prohibits remarks that “reflect adversely” upon an employee, while allowing positive statements, noting that this is “viewpoint discrimination,” and is a clear violation of free speech.  The policy also allows for the “summary termination” of the right to address the school board, which, according to the ACLU, also is prohibited under the First Amendment.  The ACLU also expressed concern about the District blocking email communications by a parent shortly after she spoke at a board meeting.

The ACLU letter and an Irvine Watchdog article on the meetings bring into question the appropriateness of Administrative Regulation (AR) 1313 regarding “Civility.”  This policy mirrors Bylaw 9323 in utilizing vague language to describe the offense, does not provide for any warning or notifications, and gives total authority to ban speech indefinitely without any appeals process.

The IUSD Administrative Regulation 1313 “Civility” uses vague language.  It first states that the purpose is to promote “mutual respect, civility, and orderly conduct among district employees, parents, and the public.” It then reasonably describes the protocol of calling the police if there is a physical threat on campus.  But the next sentence is where the IUSD administrative regulation makes a quantum leap.  It states:

If any individual abuses the privilege of communicating via voice mail and/or e-mail, that privilege may be revoked by the superintendent or designee. Abuses are enumerated above, but also include inappropriate use of the “copy to:” feature, excessive size, or frequency of email.

What exactly is an “inappropriate use of the ‘copy to’ feature?” Is cc’ing someone’s supervisor or their own spouse considered inappropriate?  Who determines if the size of the email is “excessive?”  What frequency of emails are “inappropriate” or rise to the level of “abuse?”  What about parents of children with medical or other special needs – are they more likely to be arbitrarily punished due to their increased needs to communicate with the school staff?

Like Bylaw 9323, AR 1313 “Civility” does not require any notice to the “offending” party and has no limits to the communication ban.  These nebulous terms and designation of unlimited power to school district employees create an environment that is rife for abuse.  This allows the Superintendent “or designee” complete unfettered authority to revoke all communication by members of the public to district staff or elected board members – indefinitely.  Even the California penal code only allows a 14-day ban on attending a school site for those who “constitute a substantial and material threat to the orderly operation of the campus or facility.”

According to the California Department of Education, there are over 1,000 school districts in California.  However, an online search of the provision of “abusing emails” in IUSD’s AR 1313  yielded only one other school district in the entire state that allows for this unilateral power and indefinite ban on communications by a member of the public.

Taxpayers pay for each of the IUSD school board members to join the California School Board Association, and travel to conferences.  The IUSD board holds 2 delegate positions which are leaders within the CSBA. IUSD Board members should, therefore, be very well aware of the CSBA model board policies and recommendations to review policies annually.  However, the IUSD “Civility” policy has not been revised since 2007 the Rules of Conduct portion of Board Bylaw 9323 has not been revised since at least 2004.

Despite spending over $12,000 on the CSBA Gamut Online Policy services July 2021, the District never incorporated recommended changes to AR 1313 which are described as:

New policy addresses the importance of civility to the effective operation of the district, including its role in creating a positive school climate and enabling a focus on student well-being, learning, and achievement. Policy includes First Amendment free speech considerations, behavior that constitutes civil behavior, practices that promote civil behavior…

The CSBA version of AR 1313 does not contain ANY verbiage regarding “abusing” the cc feature, or excessive or frequent emails.  Nor does it allow for the District staff’s unbridled authority to revoke communications of members of the public.  Unlike the IUSD version, the CSBA clearly defines “civil behavior” and holds school Board members and district employees to the same standards as members of the pubic.

IUSD’s neighbor, the Tustin Unified School District updated its “Civility” policy in November of 2021 to align with the CSBA recommendations and references freedom of speech and expression under both the U.S. Constitution, as well as the California Constitution – neither of which are referenced in IUSD’s 15-year-old AR 1313.

It’s time for the IUSD Board members to update the antiquated policies of Bylaw 9323 as well as AR 1313 to ensure that they are in alignment with the First Amendment, the California Constitution, the Brown Act and the industry standard as provided by the CSBA.  The revised policies must:

These changes will provide clarity and remove any motivation for abuse of power. Rather than using “civility” to silence voices, it should be used to allow for clear communication, resulting in the Board’s prompt response to concerns.

Tiffany Craft is a 10 year resident of Irvine and an 18 year resident of California. She's a Colorado native who has lived in 3 different states and was drawn to California after vacationing here frequently with family throughout her youth. In her 18 years residing in California, she has lived in 5 different counties between Northern and Southern CA. She ultimately settled in Irvine with her husband, 10 years ago, when searching for the ideal place to raise a family. She's a mother of an 8 year old daughter who just completed 2nd grade at an Irvine Unified Elementary school. She left the corporate world in 2015 to dedicate her time to being a mom and a parent volunteer. She's a regular attendee at IUSD Board of Education Meetings and frequently shares public comments. She's active in PTA and School Site Council at her neighborhood school. In addition, she enjoys volunteering with Irvine Girls Softball Association (IGSA). She loves Irvine and is an advocate for youth and believes it's important our elected officials be transparent with the public and be held accountable for their decisions.