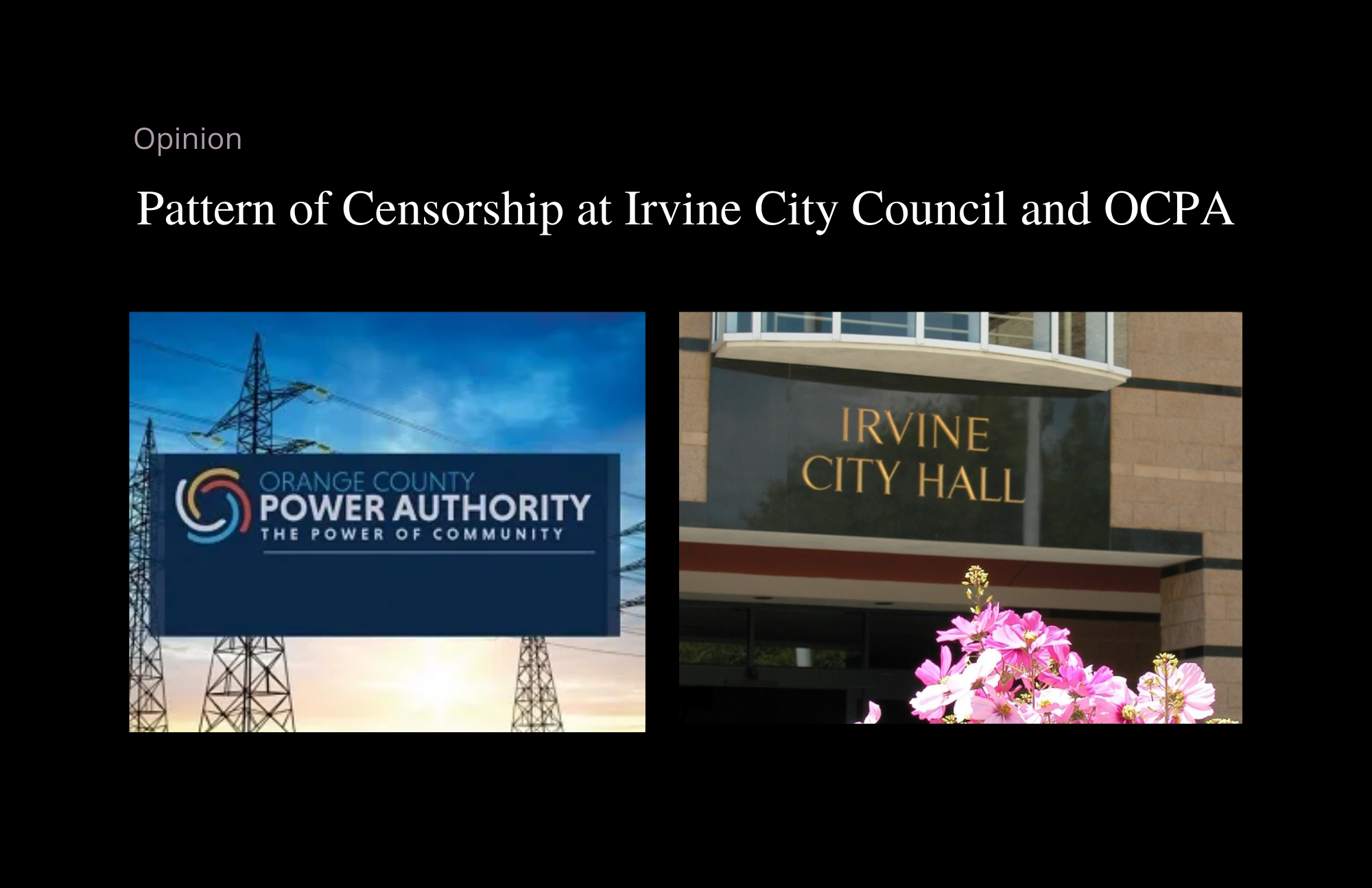 There has been a pattern of censorship that has occurred under the direction of Councilmember Mike Carroll at the Irvine City Council and Orange County Power Authority (OCPA).  This article documents recent events.

At the May 3, 2022 Orange County Power Authority (OCPA) meeting, an incident occurred that was similar to events that happened at the March 8 and March 22 Irvine City Council meetings. This prompted the ACLU to send admonishing letters to the Irvine City Council. An ACLU letter sent on April 19, 2022 reproached the City of Irvine for interfering with a member of the public’s “statutory and constitutional rights to address the Council on matters of public concern.”

In spite of this, the OCPA interfered with this same member of the public when she tried to express the same points at the May 3rd OCPA meeting.

At the March Irvine City Council meetings, Fox attempted to comment about Mike Carroll’s qualifications to be on the OCPA board. She also attempted to make the same comments at the May OCPA board meeting.

In both cases, the attorneys, Jeff Melching as Irvine’s city attorney and Ryan Baron as the OCPA attorney, interrupted Fox and cut her speaking time short.

The reason given by the attorneys at each of these meetings was that Fox was “not speaking about something that is within the subject matter jurisdiction of the City [or OCPA].”  So the question becomes:

Was Fox using her public comment time at each of these meetings to address matters that were in the jurisdiction of each of these entities?

The ACLU letter sent to the City of Irvine on April 19, 2022 stated the ACLU’s position on this.

Here are some excerpts from the letter that the ACLU recently sent to the City of Irvine.

Note: This April ACLU letter, addresses occurrences at March Irvine City Council meetings that mirror what occurred at the May 3, 2022 OCPA board meeting.

We [the ACLU] are aware of two separate incidents of City Attorney Melching interfering with a speaker during the general public comment portion of the meeting. First, on March 8, Irvine resident Dee Fox addressed the Council about concerns over the appointment of Councilmember Mike Carroll to various committees. …

Approximately thirty seconds into her comment, Mr. Melching requested that the City Clerk mute her. As justification, Mr. Melching stated that Ms. Fox was ‘not speaking about something that is within the subject matter jurisdiction of the City. Mr. Melching also took it upon himself to defend Councilmember Carroll by clarifying that ‘no court has found him personally guilty of fraud or any other crime’ despite Ms. Fox’s having referred only to the corporation’s liability. …

First, at the March 8 meeting, had Mr. Melching allowed Ms. Fox to contextualize her comments before interrupting, it would have been clear that her comments about Councilmember Carroll’s fitness to serve on multiple committees was related to his position as Chairman of the Board of the OCPA, the Community Choice Energy program initiated by Irvine and implemented via Joint Powers Agreement with other OC cities.

Second, true statements are not slanderous. At both the March 8 and March 22 meetings, Ms. Fox stated facts in the public record.10 And finally, even if Ms. Fox’s comments were false or slanderous, the remedy would be for the aggrieved party to file a civil lawsuit alleging slander—not for the government to prohibit her from speaking. Muting Ms. Fox as she addressed the Council was an unconstitutional prior restraint.”

Note: The full contents of this ACLU letter that admonishes the Irvine attorney for interfering with a member of the public’s “statutory and constitutional rights to address the Council on matters of public concern” can be found in the following link: ACLU Warns Irvine City Council of First Amendment Violations

During the public comment period at the May 3, 2022 OCPA board meeting, Fox attempted to make the same points that she tried to make at the March 2022 Irvine City Council meetings. Fox’s style still confrontational, but this time she had the ACLU letter to the City of Irvine to back her up her right to make these points, confrontational or not. However, mirroring what Irvine had done, the OCPA also prevented Fox from making her points as well as cutting her time short.

A few seconds into her comment period, the OCPA attorney interrupted Fox. He stated that her comments were not relevant to “the subject matters under jurisdiction of this board.” OCPA Attorney Baron and Public Commenter Fox then had an approximately two-minute back-and-forth regarding what Fox could speak on. Then the OCPA attorney cut off Fox’s comment time. Note: OCPA’s policy is that each public commenter has three minutes to speak.

“Censorship reflects a society’s lack of confidence in itself.“— Potter Steward

By extension,  the OCPA board could have learned and applied this lesson at the May 3 OCPA meeting. This is especially true since Mike Carroll is both an Irvine city council member and the Chair of the OCPA. However, the OCPA board repeated the same censoring of Dee Fox that the Irvine city council did. The OCPA decided to not benefit from a lesson that could have been learned from the very similar situation that occurred in the Irvine council chambers.

“Let’s us be clear: censorship is cowardice. … It masks corruption. … But worst still, censorship destroys criticism, which is the essential ingredient of culture.”— Pablo Antonio Cuadra

Upcoming Meetings Of Note Regarding The OCPA