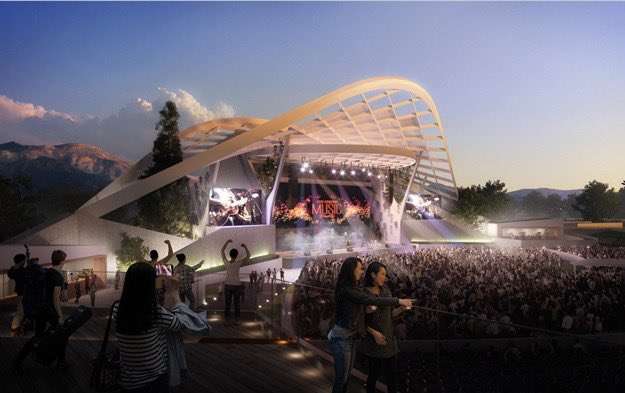 On Tuesday, September 27, at 3:00 p.m., the Great Park Board will vote on approval of a contract committing more than $100 million in public funds to the construction of a 14,000-seat amphitheater to be exclusively managed by Live Nation Worldwide, Inc. for 30-50 years.  The structure would be sited in the “Heart of the Park,” considerably closer to residential neighborhoods—and further from public transit–than the interim amphitheater site adjacent to the Irvine Transit Center. The staff report describes the site as: “Approximately 25 acres located northeast of the intersection of Great Park Boulevard and Skyhawk.”

Questions That Need to Be Asked

The proposed contract disclosed a bare seven days before the meeting, raises a plethora of questions and concerns, including these:

The staff report summarizes the basic terms of the proposed contract as follows:

While Live Nation is obligated to contribute $20 million to construction costs, the City will be required to require to pay for the remainder. Significantly, the staff is unable to state the amount of the City’s contribution, although it seems certain to exceed $100 million:

“The City and Live Nation will determine the total development cost of the amphitheater following completion of [Schematic Design] and at two points during the [Construction Drawings] process. At those three points, formal cost estimates will be developed, and should the total cost of the facility exceed $130 million, the parties will identify design and engineering opportunities to reduce overall construction costs.”

Thus, the City will be obligated to front up to $110 million in construction costs. If total costs exceed $130 million, the parties could agree to shrink the size of the facility. Or Live Nation could pressure the City to finance all or part of the additional cost.

Staff states that City revenues generated from the contract “would support the construction of a facility that costs up to $130 million.” In other words, the annual fee collected from Live Nation would, in thirty years, be enough to recoup the City’s up-front construction costs. Meanwhile, Live Nation would be allowed to reap unlimited profits from its operation of the facility, with no provision to share them with the City.

Staff presents this as a good deal for the City in a paragraph that collapses under minimal scrutiny:

The annual fees to be paid by Live Nation to the City of approximately $4.3-$4.5 million represents an approximate four percent return on the City’s investment and yields full repayment of the City’s capital contribution over the term of the DCOA. This projected financial return to the City compares favorably relative to other public amphitheater deals reviewed by staff, none of which yielded a return to the public agency in excess of $1 million per year, or more than a 1.9% return on capital investment. Several of those examples include: [Ascend Amphitheater in Nashville, Concord Amphitheater [sic] in Concord, and Dos Equis Amphitheater [sic] in Dallas.]

Second, the staff touts the proposed amphitheater as “envisioned to serve as the Orange County equivalent of the Hollywood Bowl.” The Hollywood Bowl is owned by Los Angeles County and operated by the nonprofit Los Angeles Philharmonic Association. It would seem to be particularly instructive to examine the terms of the agreement between those two entities, but the staff report provides no such information.

Also missing is any discussion of another Southern California amphitheater, the 5,800-seat Greek Theatre in Griffith Park. In 2017, the Los Angeles Department of Recreation and Parks (RAP) issued a Request for Proposals for venue and concessions management that stated in part: “The objective of this Request for Proposal … is to award a ten-year with one five-year extension option Venue and Concession Management Agreement … to an Operator who will: Provide the public with the safest and most enjoyable concert experience [and] Maximize revenue to RAP ….”  Regarding compensation, it stated: “For venue management, RAP will pay an Annual Management Fee to the operator based on the selected proposal.”  Thus, the City of Los Angeles sought a deal that was essentially the reverse of the proposed Irvine deal:  The venue owner would reap the profits and pay a fee to the manager instead of allowing the manager to reap the profits in return for a set fee to the owner.

Instead of discussing these nearby public venues, the staff report cites far-flung examples of other facilities managed by Live Nation. Those are instructive in their own way—for what staff doesn’t disclose.

Staff states that the City of Concord receives an annual payment of about $800,000 for operation of the Concord Pavilion (which it erroneously calls the “Concord Amphitheater”). What it doesn’t say is that except in size, Concord Pavilion is in no way comparable to Irvine’s proposed amphitheater. The Pavilion was designed by famed architect Frank Gehry and opened in 1975. Thus, it was constructed nearly 50 years ago, obviously at a much lower cost than would be required for a comparable facility today. The City of Concord’s current contract with Live Nation was signed in December 2013, nearly nine years ago, when its proposal was selected over a competing proposal by another firm. The contract term is only ten years, with a city (not Live Nation) option to renew for an increased fee. The contract also requires Live Nation to spend $3.7 million on renovations, including tree planting and construction of new concession facades.  Additionally, Live Nation is required to offer 99% of concert tickets to Concord residents before they go on sale to the general public. When all these facts are considered, it seems likely that Concord’s deal with Live Nation is much more favorable than Irvine’s proposed deal.

Another example cited by staff is Dos Equis Pavilion in Dallas (again erroneously called “Amphitheater” in the staff report).  It is another mature venue that opened in 1988, so construction costs would have been much lower than what’s being proposed for Irvine, making direct comparisons problematic. What is noteworthy and cautionary is that the venue has operated under at least seven different names over its 34-year history. Live Nation’s practice of selling naming rights to different corporations every few years should raise a red flag in the absence of any assurance that rights will be retained by the City of Irvine.

Live Nation is an American events promoter and venue operator founded in 1996. Its “business was built around consolidating concert promoters into a national entity.” In 2010, Ticketmaster merged with Live Nation, allowing the company to not only manage concert venues but also control ticket sales. Prior to the merger, in an open letter to his fans regarding problems with Ticketmaster, Bruce Springsteen warned that “the one thing that would make the current ticket situation even worse for the fan than it is now would be Ticketmaster and Live Nation coming up with a single system, thereby returning us to a near monopoly situation in music ticketing.”

Live Nation was named as a defendant in multiple lawsuits arising from the disastrous crowd crush at last November’s Astroworld Festival in Houston, which left ten people dead and many more injured. Common allegations in the complaints were that organizers failed to provide adequate security and failed to keep people safe during the event.  Attorney Sean Roberts stated:

In the wake of the Houston tragedy, media outlets reported that Live Nation has a long history of safety violations: “Live Nation Entertainment and its subsidiary Live Nation Worldwide have been connected to about 200 deaths and at least 750 injuries since 2006, the Houston Chronicle reported on Monday after searching past court records, Occupational Safety and Health Administration (OSHA) reports, and news coverage.”

New Jersey Rep. Bill Pascrell has called for Live Nation to be broken up, citing its monopolistic control of concerts as a cause of lax safety practices. “They may double the profits, and they still didn’t do anything about the safety of folks who go to their concerts,” Pascrell said. “The disaster results are obvious in terms of how many people died. They got to be held accountable, just like any other business.”

Why did the City of Irvine choose to negotiate exclusively with this controversial conglomerate instead of seeking competing proposals from multiple qualified, reputable venue operators? This is yet another question that demands an answer at Tuesday’s meeting.

Comment in person at City Hall or via Zoom. Instructions are HERE

Disclaimer: The views and opinions expressed in this article are those of the author and do not necessarily represent the position of Irvine Watchdog or any of its volunteers.