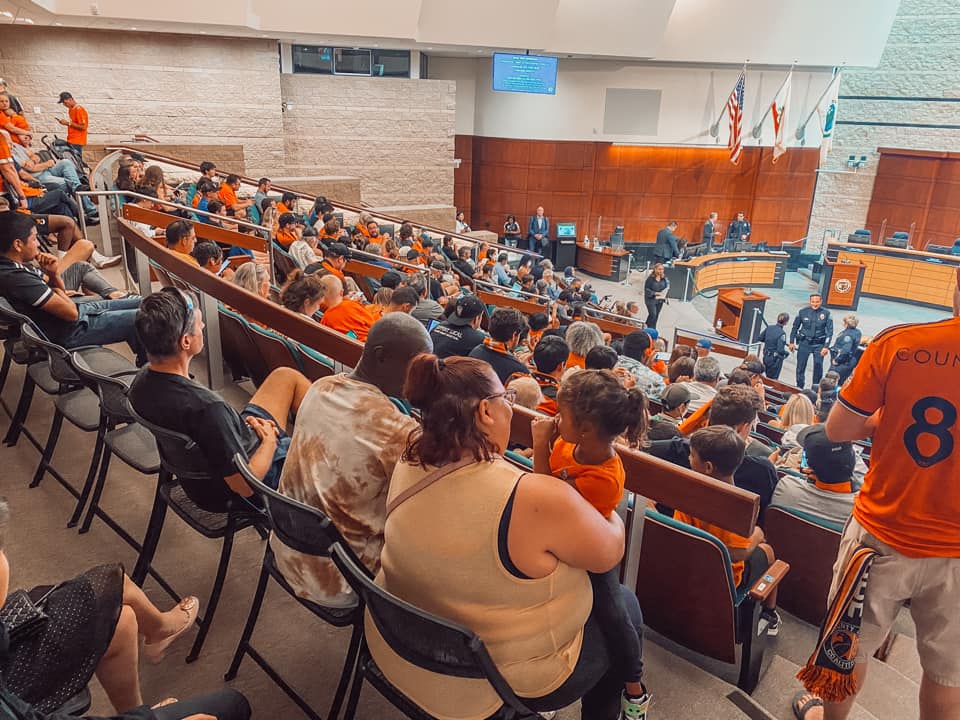 In the days leading up to August 9, 2022, Irvine City Council Meeting, the Agenda included a study session to consider future uses of the Great Park soccer stadium. Attached was a report signed by City Manager Oliver Chi and the Director of Community Services outlining three stadium use options. Unfortunately, one option spelled the demise of the Orange County Soccer Club (OCSC), a professional top-tier soccer team and defending National champions, from ever playing soccer in Great Park Championship Stadium. Naturally, this did not sit well with the OCSC organization and loyal fan base.

In a matter of days, OCSC emailed every member on their distribution list, posted on their social media accounts, and created preset letters of support for followers to send to each Irvine City Council member. However, on the day before the meeting, the study session vanished from the Agenda as quickly and quietly as it initially appeared. However, this did not stifle momentum as OCSC released a statement encouraging all to appear at the meeting.

Crowds gathered outside City Hall dressed head to toe in OCSC fan merchandise, including orange and black Jerseys, scarves, and some wielding trumpets. Even Gnarly, the team mascot, came out to support the team. The atmosphere resembled a 2021 OCSC playoff game. The crowds cheered on their way to the auditorium seats, just as they had many times at Championship Stadium. Only this time, the orange smoke bombs had to stay home.

The Council made a packed City Hall wait for an unusually long two-hour closed session before commencing with public comments. Then, finally, one by one, 43 total speakers stepped up and packed their meager 90 seconds with passionate pleas to keep their team at the Great Park. Speakers ranged from club owner James Keston to business owners, philanthropists, lawyers, parents, Irvine residents, non-Irvine residents, children, youth soccer players, and a large variety of Scottish accents (note: the Club has a close partnership with Scotland-based Rangers FC). One such speaker, Stewart McDougall, gave a fierce call to action ending with a Winston Churchill quote.

Anong the Mayor and City Council, only Councilmember Larry Agran acknowledged the crowds sitting in the auditorium. He asked City Manager Oliver Chi for a procedural breakdown of what the public should expect moving forward. Chi defensively explained the City’s actions as merely discussing various options and reiterated that negations are ongoing. He highlighted that the Club’s arrangement with the stadium was simply a Memorandum of Understanding (MOU) set to expire this November. Chi said the options available are 1) extend the MOU and keep the status quo arrangement, 2) enter into exclusive partnerships with other clubs, or 3) limit or ban professional clubs, so the stadium is more available for local public use. Chi also alluded to a recent legal demand letter sent by OSCS to the LA Galaxy.

Reception from the community appears positive. However, there is an understanding that this dispute will be long, contentious, and is currently unresolved. Andy King of the County Line Coalition, a frequent contributor to the Orange & Black SoccerCast and administrator of the Orange County SC Fans Facebook page, had mixed feelings:

“To some degree, I get the city’s stance. They just want money. They want to look good to their constituents with a big income line on the city budget. I think it’s a betrayal for them to effectively turn their back on the team and to slip the agenda item in, seemingly doing it late Thursday to try to sneak it by people. It feels wrong… from the fan’s side, it was awesome to see our fans and team sponsors come together and show up for the team. It’s one thing for fans to say, ‘we don’t like this,’ but when residents and business owners within the city stand up and say, ‘we don’t like this,’ I think that carries more weight with the city.”

For now, it’s unclear what direction the City will go. Will the City agendize the study session again? If so, will they present the same three options, or will there be the inclusion of more creative plans for future use of the stadium, one that doesn’t leave OCSC in the dark? Whatever occurs, the City knows there is a force to reckon with if OCSC loses a home at the Great Park.

“Initially, there was no decision tonight on ultimately what we were going to do with the stadium. There was a planned study session to review possible options. Given that our existing MOU with the OCSC is set to expire in November of this year. Given that factor, we have been exploring for the past couple of years here at the city different ways for us to engage the stadium so that there is more community use of the facility. That has been a consistent bit of feedback from Irvine-based community groups.

“The challenge really is that the soccer stadium is a city-owned stadium, it was built with city taxpayer money, it is funded and maintained with city taxpayer money, and we have certainly heard concerns and issues from different groups in the community that they have challenges accessing the stadium based on the way we have utilized it more for professional events.”

“There was no deal with LA Galaxy that has been contemplated. There have been discussions with the Galaxy, but it is not accurate to stipulate that the soccer club was not aware those conversations were happening. We have kept OCSC and their representatives in the loop on the decision-making process to let them know this was a chance for us to engage the city council in a discussion of the options and the options really are.”

“There are a variety of other issues associated with the overall decision-making matrix, and frankly, we would have preferred at the staff level to have the conversation with the City Council this evening. However, we were informed that the USL and MLS are currently engaged in some kind of litigation, and OCSC sent the LA Galaxy a strongly worded legal letter that preceded and precipitated our request at the staff level to withdraw the item until that matter has been resolved.”

“There are issues that are occurring behind the scenes that do warrant additional review. We will continue to have an open and transparent dialogue with the council and community moving forward on the best way to utilize the stadium that conversation will happen over the next couple of weeks after we have reviewed and really vetted some of the legal issues that have been brought to our attention. Again, not with the city, but between two private parties, two soccer leagues that appear to be at odds. More on this will certainly come in the next several weeks, and we will certainly have an open discussion on this matter moving forward.”