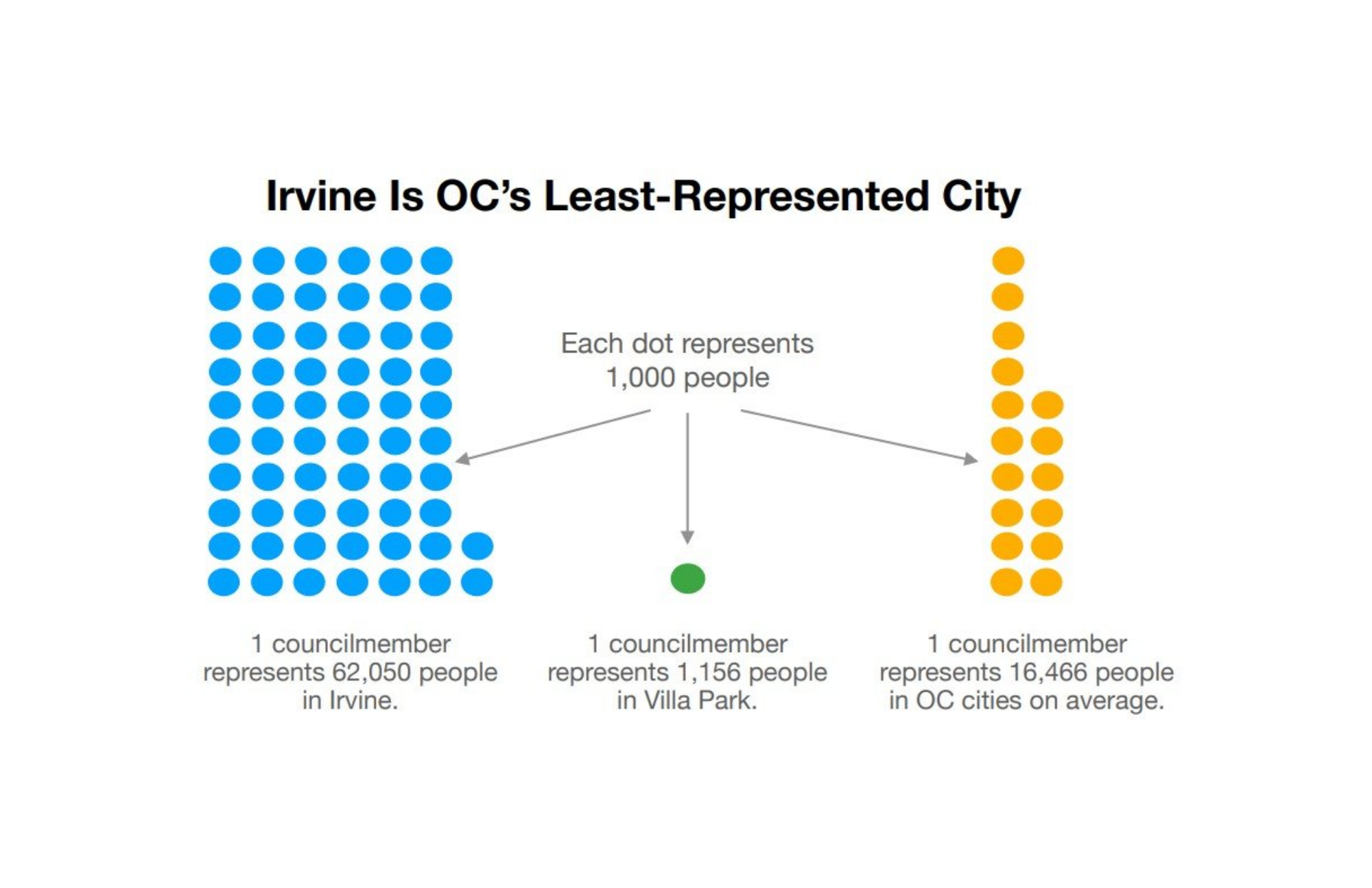 Irvine could take a significant step toward greater representation on July 12, 2022. Councilmembers Larry Agran and Tammy Kim have agendized a discussion on switching to district elections as well as expanding the city council size. Read the memo for item 3.4 here. For the July 12, 2022 City Council agenda click here.

Among the 18 largest cities in California, Irvine is the only one still using at-large elections.

At its core, the at-large system makes running a viable campaign cost-prohibitive for people who lack major funding sources such as corporate donors, political action committees (PAC), or labor unions.  While independent expenditures funded by the major developers have totaled over $1 million in Irvine elections, the average Irvine City Council candidate fundraised less than $50k according to the City of Irvine campaign finance disclosure portal. Furthermore, the at-large system is widely believed to disenfranchise racial minorities who are not adequately represented in these elections.

Nevertheless, the Irvine council voted last year to keep at-large elections, choosing to wage a legal battle against Kevin Shenkman to preserve the current system. According to the LA Times,

“For the past several years, Shenkman, who lives and practices law in Malibu, has been suing, or threatening to sue, cities all over Southern California, demanding they change the way they elect members of their city councils in order to increase the numbers of African-American and Latino representatives.”

And according to the Voice of OC,

“Under the California Voting Rights Act, if Shenkman can prove the city suffers from “racially polarized voting,” the city would be compelled to switch to district voting, meaning every office aside from the mayor would cater exclusively to one part of the city.”

On average, residents in other OC cities have nearly four times as much city council representation as Irvine residents, with one council member per 16,466 residents, while Irvine has only one representative for every 62,050 residents.

Irvine is the largest city in California represented by only five city council members – the minimum allowed by law.  Much smaller neighboring cities, such as Newport Beach (84,000 residents) and Costa Mesa (111,000 residents), have expanded their councils to seven members to increase democratic representation. Irvine is home to 310,000 people, is the fastest-growing city in the state, yet has had only five council representatives since adopting the city charter in 1975. Other midsize cities in California have as many as 10 councilmembers.