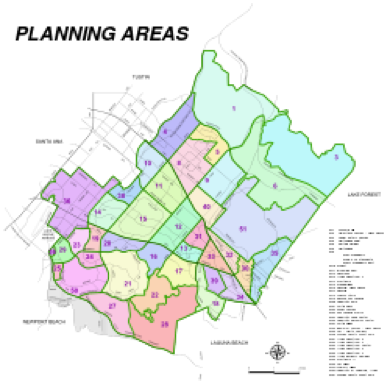 Irvine’s General Plan update is 20 years behind schedule.  This should come at no surprise given that there are no apparent consequences of approving development projects that are inconsistent with the General Plan Provisions.  The General Plan is the citizens “blueprint” for development; the guide to achieving our vision for the City. As Commissioner Smith stated at last week’s Planning Commission meeting, “This is the city’s single most important document.”  Did you know the City is a year and a half into updating the General Plan, a state-required document representing the long-range vision of the City?   Here is the link to the current General Plan  http://www.cityofirvine.org/community-development/current-general-plan

The last comprehensive update was in 1999 because it’s tough to take a policy look when major growth is happening all around. The city is maturing and almost at build-out.  In this update, two high priority levers are neighborhood preservation and enhancement and the intensity and density of development.  Both extremely important to our future land use and design guidelines.

Irvine Watchdog attended the last Planning Commission meeting and spoke during public comment to express concerns about traffic, congestion and neighborhood preservation.  Staff presented a report of the general plan survey that was sent out to the city.  The Watchdog has questions about the validity of the survey which is the basis of the General Plan Amendment and do not believe that it should be the basis for any plan that determines the goals, policies and procedures.  Our reasons stem from the following facts:

We also question the survey because the questions were rather general, so people had differing interpretations as to what information the questions were asking. Irvine is an extremely diverse community, economically, culturally, educationally and these differences would lead to different interpretations of questions and to differences in priorities.  Irvine Watchdog does not see evidence that the survey population sample represented this diversity.

There is objective evidence that the primary concerns of Irvine residents have to do with quality of life, neighborhood preservation and enhancement, land use design, school overcrowding, traffic flow and parking.  Yet, the planning commission recently voted for 2 development projects and sent them to the City Council even though the projects are inconsistent with the General Plan Principle Guidelines. They approved a development project located near the intersection of Main and McArthur that would decrease parking in a shopping center with shortage of parking for current use, and put in a 24 hr 7 Eleven with liquor license and a gas station. The traffic study presented did not differentiate between peak traffic hours and non-peak traffic hour and contended that this project would only increase traffic flow by under 2 trips per hour.  Question: Is this neighborhood preservation and enhancement, and does it serve to improve traffic flow does it enhance quality of life; does this focus on community? They also approved an (general plan) amendment to the Orchard Hills master plan by approving 152,  two story, 4 bedroom homes in Orchard Hills and approved decreases in lot line setbacks so that they could crowd more homes than called for in the Orchard Hills master plan.  Question: Is this neighborhood preservation and enhancement and is it good land use design, does this focus on community?

Do you think that the City Council and Planning commission have intention to follow the General Plan Guidelines?

So, what can you do?  The update process is dependent on public participation with the final document targeted for completion in  2020.  We can help now by making sure the City is identifying the correct major goals and topics to build upon the long-standing objectives that define Irvine.  Two more public meetings are scheduled this month during regular city meetings:  June 18th ( Finance commission meeting) and June 26th (City Council meeting).  You will hear a staff presentation and results from the 2nd public outreach survey, where only 2,000 people responded and not all were even Irvine residents.  Irvine Watchdog attended the Planning Commission meeting and you can do the same at one of the remaining public meetings.  Come out to express your community goals.

Some questions for the Council surfaced from last nights meeting.  Did everyone on the City Council and all the commission members take the survey and did our Councilmembers provide enough direction and feedback to City staff on the General Plan update process and the choice of questions or construct of the survey. It’s so important that we get this right to safeguard Irvine’s high quality of life.