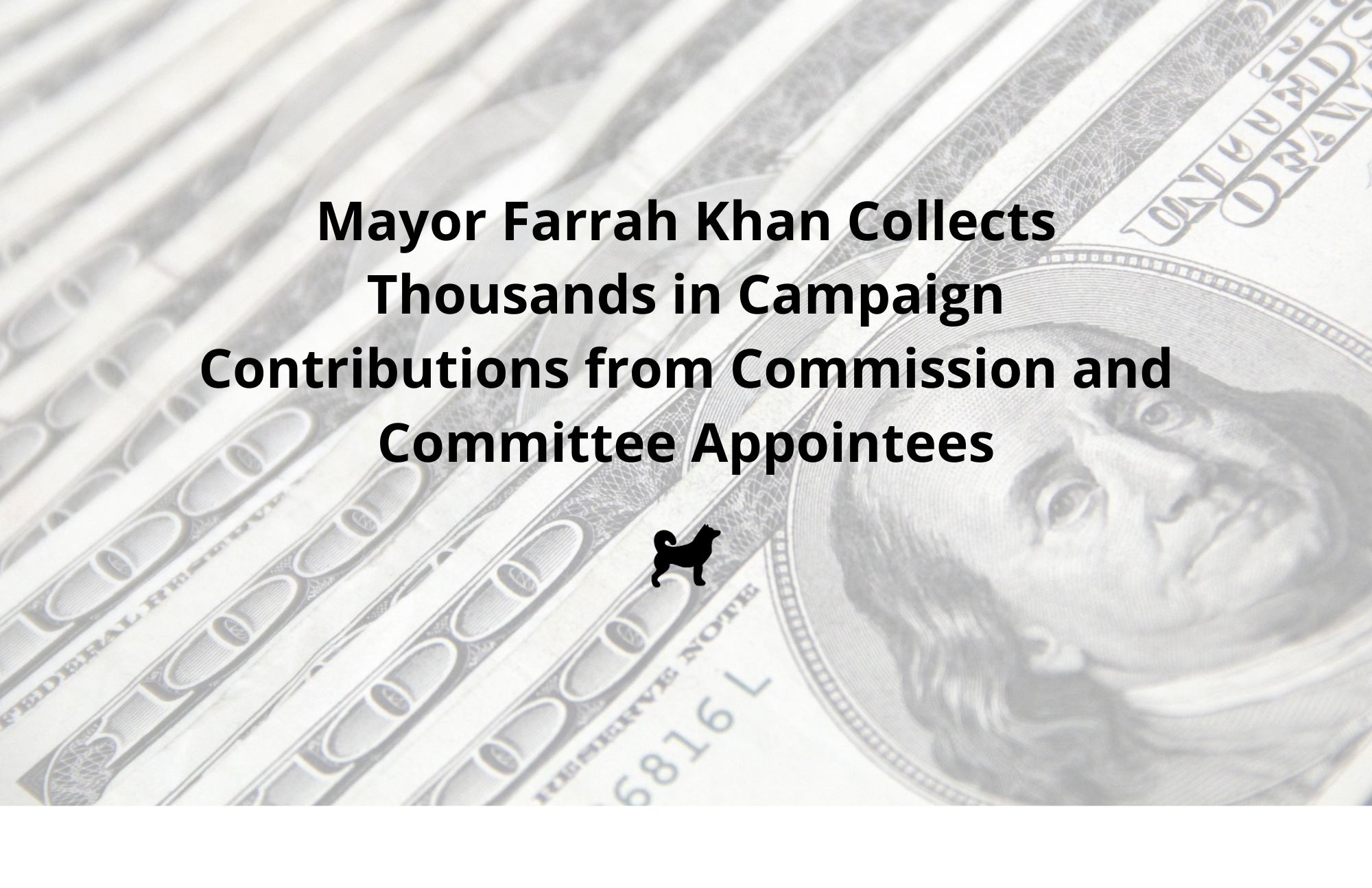 Mayor Farrah Khan’s re-election campaign reported receiving more than $4,000.00 in campaign contributions from her current appointees to City of Irvine commissions and committees, in its most recent FPPC Form 460. All but one of Khan’s current commissioners had already donated the legal maximum of $550.00 by the end of last year. The “Recipient Committee Campaign Statement,” filed February 1, 2022, covers the reporting period July 1, 2021 through December 31, 2021, and is available here. Contributions received in the first half of 2022 are not required to be reported until this summer.

Khan’s previous campaigns for Mayor and City Council collected more than $5,000.00 from that same group of appointees, the Form 460s for those campaigns disclose. The one commissioner not reported as a donor to her 2022 campaign nonetheless donated the legal maximum of $530 to her 2020 mayoral campaign, and also donated $400.00 to her 2018 Council campaign. (Irvine’s campaign contribution limits are adjusted for inflation, and thus have increased in each campaign cycle.)

Irvine Watchdog reviewed the campaign finance disclosure statements of Khan and the other City Council members following the Council’s 4-1 vote to give preliminary approval to a ordinance proposed by Khan and Tammy Kim, banning spouses and certain family members of Council members from serving on commissions and committees. The only immediate impact of the proposed ordinance apparently would be to require that Dr. Phyllis Agran, pediatrician and wife of Councilmember Larry Agran, leave her uncompensated position on the Irvine Children, Youth and Families Advisory Committee (ICYFAC).

The proposed ordinance is set for second reading and adoption as Item 2.11 on the Consent Calendar at the Council’s meeting next Tuesday, April 26. The agenda, along with the text of the ordinance, can be found here.

The proposed ordinance includes a “whereas” asserting that “the relationship between a Councilmember and his/her appointees to City commissions and City committees is akin to the supervisor-subordinate relationship that is restricted by the No Nepotism Rule.” This analogy is debatable, in part because most City employees have civil service protection and can be terminated only for good cause, whereas commissioners and committee members serve at the pleasure of the appointing authority and thus can be terminated at any time, without notice, for any reason or no reason at all.

Still, the Council is poised to enshrine the analogy in the Municipal Code, and that begs the question:

When, if ever, would it be legal or ethical for a City supervisor to solicit or accept substantial payments of money from subordinates or applicants for City employment?

Every one of the “akin to supervisors” on the City Council has taken substantial campaign contributions from at least one of their “akin to subordinates” on commissions and committees. A subsequent article will detail contributions to the other councilmembers, but with multiple campaigns under her belt, Mayor Khan far exceeds her colleagues in this regard.

The accompanying chart depicts the donations each of Khan’s current appointees has made to her current and past campaigns. Only two committee members appear to have no documented donations to any of her campaigns: Amil Aaron of the Diversity, Equity and Inclusion Committee, and Lee Sun, chair of the Investment Advisory Committee.

At the other end of the spectrum is Dina Eletreby, Dr. Agran’s colleague on ICYFAC, who tops all others with her cumulative donations of $2,120.00 to Khan’s campaigns since 2015. Eletreby donated $500.00 to Khan’s current re-election campaign on June 3, 2021, and maxed out in Khan’s 2020 mayoral campaign.

Planning Commission Chair Steve Huang comes in a distant second to Eletreby, with a cumulative total of $1,520, including maximum donations to both the current re-election campaign, and Khan’s unsuccessful 2016 Council race.

In third and fourth places are Green Ribbon Environmental Committee Vice Chair Senait Forthal and Irvine Child Care Committee member Nasi Nassiri, each of whom has maxed out in both of Khan’s mayoral campaigns. Rounding out the Top Five is Finance Commission Vice Chair Dale Cheema, himself a former Council candidate. Although Cheema maxed out in Khan’s 2020 campaign, he is not reported as a donor to her re-election campaign as of December 31, 2021. Close behind Cheema is Scott Hansen, Khan’s recent appointee to the Transportation Commission and a current Council candidate.

Disclosure: The writer donated to Khan’s 2020 mayoral campaign, and to her 2016 and 2018 City Council campaigns.