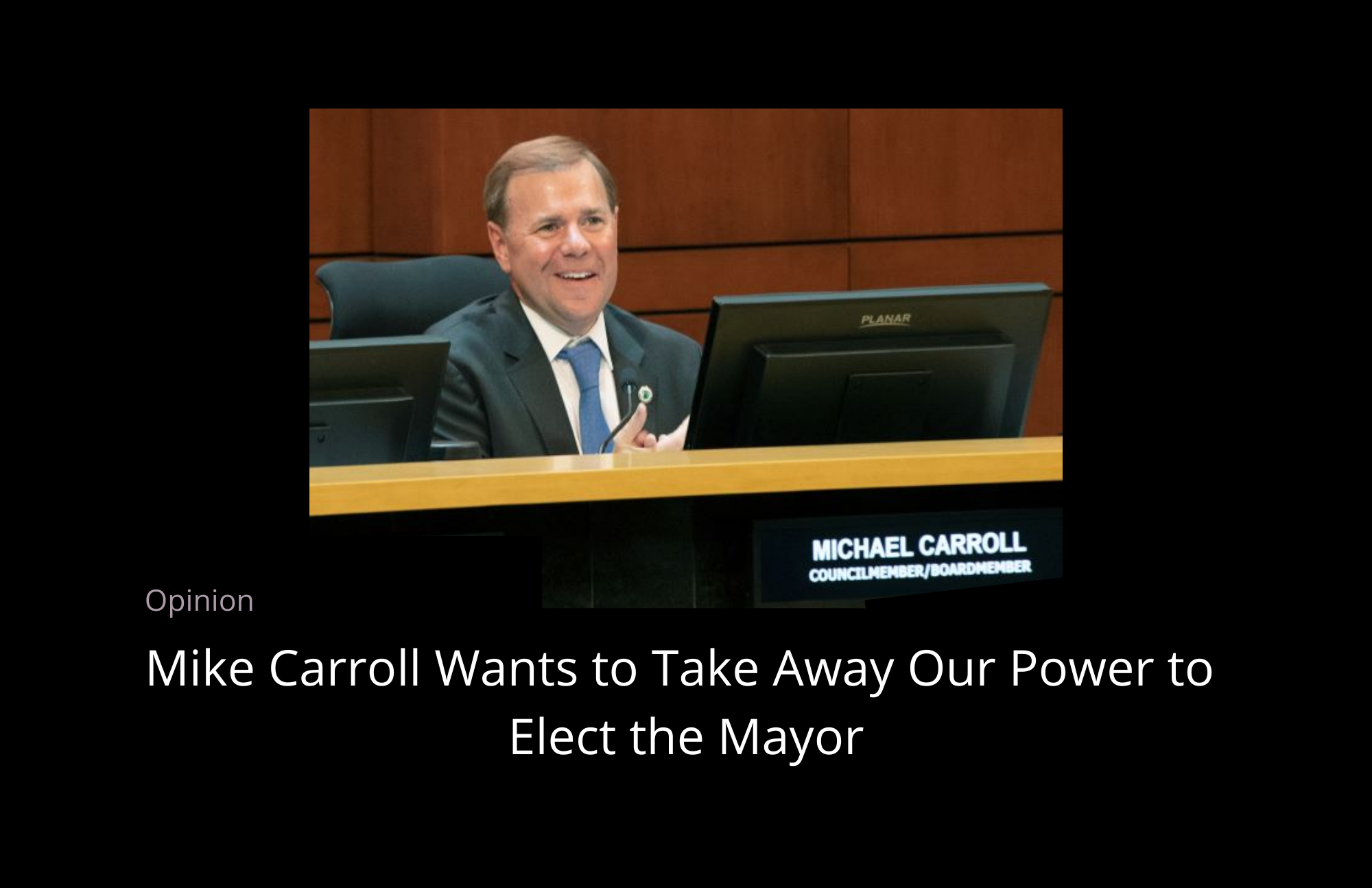 If you value your right to vote for Mayor of Irvine every two years, be sure to exercise that right in this November’s general election. If Mike Carroll gets his way, it will be your last time voting for Mayor. Furthermore, the person who wins that election could serve as mayor for up to 12 consecutive years—or zero years.

At its 5:00 p.m. meeting on Tuesday, June 28, the City Council will consider a proposal by Carroll and Tammy Kim to abolish the position of mayor as an elected office and instead allow the Council majority to select a mayor annually, as it currently does for vice mayor. This would be accomplished by means of a proposed amendment to the City Charter that would require approval by a majority of the voters in the November election.

The proposed Charter amendment would change the current term limit for Council members from two full terms to three full terms. A member who has served no more than half a term would be eligible for three more full terms. The current limit of two two-year terms for mayor would be abolished.

The proposal appears on the Council Agenda as Item 3.5. A link to the staff’s supplemental memorandum of June 24, 2022, along with the text of the proposed Charter amendment can be found there, as well as a link to Carroll’s and Kim’s memo requesting that the proposal be agendized.

According to a recent Voice of OC article, Kim agreed to second the proposal by Carroll in return for his agreement to second her proposal to amend the “Rule of Two,” which requires two councilmembers to place an item on the agenda:

“I need a second for that, he asked me to be his second for the rotational mayor,” Kim reportedly told the publication in a phone interview. “Right now I’m not convinced of anything, but what I am convinced of is it’s worth having a discussion.”

According to Voice of OC, Carroll expressed hope that the Charter amendment would “depoliticize” the mayor’s office:

“Given the recent events in Anaheim, it removes the illusion that the mayor runs or controls the city, or has more power than any of the other council members,” Carroll stated. “It ensures that the mayor will have local government experience as a councilmember before serving as mayor.”

In fact, nothing in the proposal would ensure any such thing. There is nothing in the proposed language to prevent the Council from choosing as mayor a newly-elected member with zero local government experience. The proposed Charter amendment does not diminish the powers of the mayor; it expressly states that the mayor “shall be the official head of the City for all purposes including ceremonial.” In other words, the way it is now.

The notion that the change would “depoliticize” the office of mayor is downright laughable. It would simply replace the will of the voters with backroom deals influenced by powerful special interests.

As for Kim’s reference to the proposed system as a “rotational mayor,” that, too, is inaccurate. While it is customary for the title of mayor to rotate among council members in some smaller cities, the proposed Charter amendment does not provide for such a practice. It simply provides for the council to choose one of its members by majority vote each year. There is nothing to prevent the majority from selecting the same person every year, nor is there any reason to believe a member in a minority faction would ever be selected.

How It Would Work

It’s important to understand how the proposal would work, so let’s break it down.

The first thing to know is that there would be no transition period, as might be expected for such an electoral change–despite the reference to “transitioning from elected mayor” in the title of the agenda item. Section 4 of the proposed ordinance amending the Charter states:

“This Ordinance shall go into effect immediately upon the date on which the election results are declared by the City Council.”

Section 5 states: “In the event that the proposed Charter amendment is adopted, the individual receiving the greatest number of votes for the office of Mayor in the 2022 General Municipal Election will receive a four (4) year term as Councilmember.”

Got that? The person you thought you just elected mayor wasn’t really elected mayor, and actually is just going to be one more councilmember. Moreover, that “winner” might not ever get to be mayor, as we shall see.

Section 2 would amend the Charter to provide that each December, “the City Council shall meet and shall select one of its members as its presiding officer, who shall have the title of Mayor.” That’s it. The Council can choose any of its members. It doesn’t have to be the person the voters just elected mayor, nor does it have to be a member with any previous experience. And there’s nothing there about rotating the office; the same person can be selected year after year, as long as that person remains on the Council.

Section 2 also provides for Council term limits to be increased from two terms to three, while repealing the current two-term limit for mayor. So a Council member would be able to serve up to twelve years, and would be eligible to serve as mayor for that entire period.

Let’s see how this might work in practice. Mayor Farrah Khan is running for re-election. Let’s assume she wins by a landslide, and let’s assume Carroll’s Charter amendment passes by 50% + 1 of the votes cast (the requisite majority stated in the proposal itself). The effect of the latter vote is to nullify Khan’s re-election as mayor, and to make her a councilmember for the next four years. The Council would meet in December, when it could select Khan or any other member to be mayor for the next year, election results notwithstanding. Because there is no longer a term limit for the office of mayor, Khan could be selected again each year for the remainder of her term in office.

In 2026, Khan could seek re-election to the Council, and continue to be selected as mayor for each of the next four years. And in 2030, she could do it all over again. Because Khan only served the first two years of the four-year Council term she was elected to in 2018, she would be eligible to serve three full Council terms under the Charter amendment’s expanded term limit.

Thus, Khan could potentially serve 12 more years as mayor after her current term expires. On the other hand, the Council majority could deny her any additional service as mayor notwithstanding the voters re-electing her this November. They could choose instead to install Mike Carroll year after year.

Luis Huang, who has no prior service in local government, is also running for mayor. If he wins, and the Charter amendment passes, he too would get a four-year term as councilmember in lieu of a two-year term as duly elected mayor. As with Khan, the Council could select him mayor for one year, and do it again and again. Or not.

It’s instructive to consider who would benefit from Carroll’s proposal. Certainly not the voters who currently have the right to elect the person designated by the proposal as “the official head of the City for all purposes.” The clear beneficiaries would be special interests with lobbyists able to influence the votes of councilmembers. Special interests like FivePoint–whose lobbyist Patrick Strader is known to exert power behind the scenes and to even text councilmembers during their meetings—would obviously be able to influence the selection of the mayor.

In recent years, FivePoint has nearly always had its way with Council majorities when major decisions have been made. It may be significant that Carroll himself first gained his seat on the Council through a very controversial 2019 appointment that is widely believed to have been brokered in part by Strader. Perhaps Carroll is hoping for history to repeat itself with Strader helping him to gain the mayor’s chair through appointment. It would be naïve to expect a Council majority to select a mayor not to FivePoint’s liking.

The agenda describes the proposal as increasing the number of elected councilmembers from four to five. The idea of expanding the Council to seven or nine members has considerable public support, and to a casual reader of the agenda, this might appear to be a step in that direction. Not so. The current Council consists of five voting members—an elected mayor and four elected councilmembers. Under the proposal, the Council would still consist of five voting members—all elected as councilmembers, but one of whom is selected to be mayor. The only difference is the public would be denied the right to directly elect the mayor.

Carroll’s proposal seems certain to be highly controversial, and Tammy Kim’s statement to Voice of OC suggests that public comments may influence the Council’s vote more than usual. Public Comments will be heard shortly after the meeting begins at 5:00 p.m. You can comment in person or via Zoom. Instructions for participation are here.