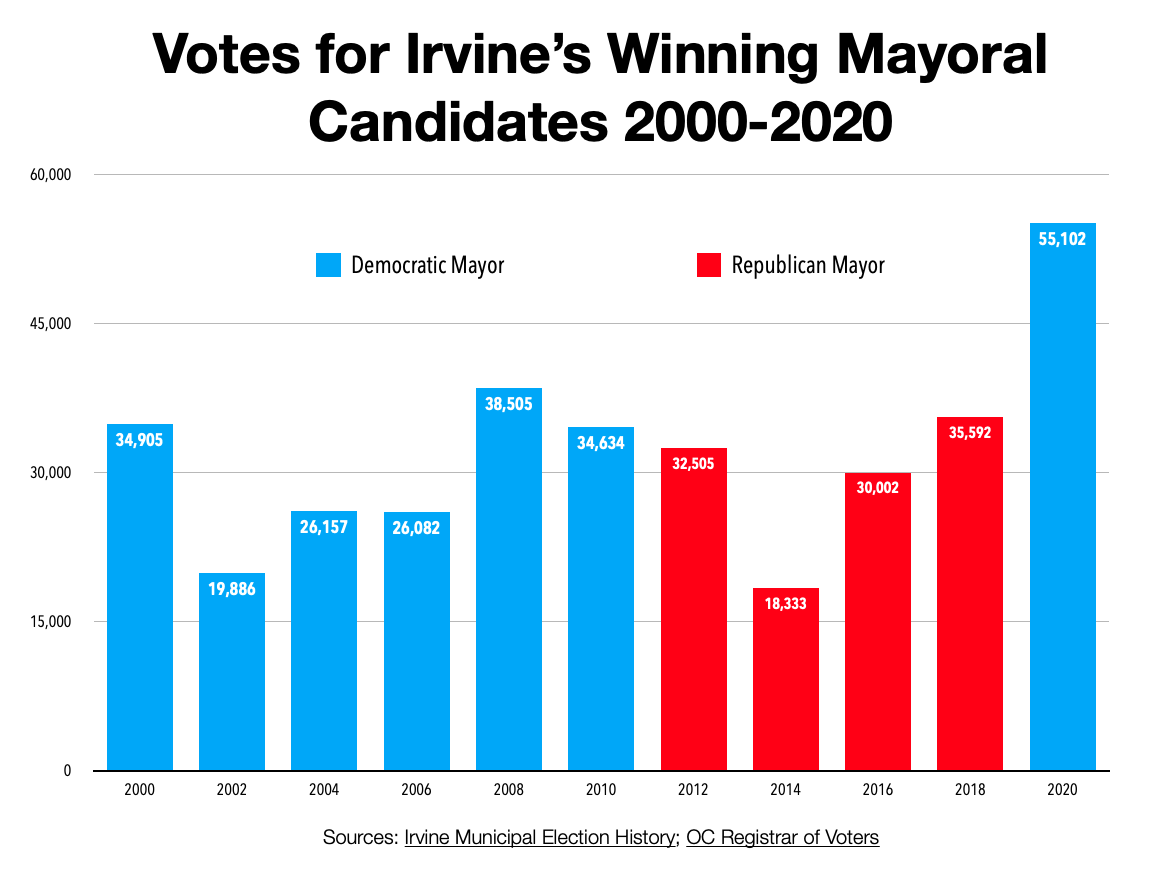 A week after election day, Irvine ballots are still being counted, but according to a map published by the Los Angeles Times, the majority of voters in every Irvine precinct except one voted for Joe Biden. The only Irvine precinct where Donald Trump won more votes was in Shady Canyon, one of the city’s priciest neighborhoods, where Trump got 300 votes to Biden’s 269.

Another notable result was in the Irvine mayor’s race, where Democratic councilwoman Farrah Khan received more votes than any mayoral candidate in Irvine history. The 55,102 votes cast for Khan so far mark a 43% increase over the previous high of 38,505 votes cast for Democrat Sukhee Kang in 2008, another election with historically high turnout.  So far, Khan has 13,606 more votes than the Republican incumbent, appointed mayor Christina Shea, a veteran of Irvine politics who was first elected to the Irvine council in 1992.  Shea has conceded to Khan.

The race brought disappointing results for repeat Republican mayoral candidate Katherine Daigle, a vocal supporter of President Trump who has run in every Irvine election since 2012.  Daigle got 8.01% of the vote – her worst performance in an Irvine election. Both Daigle and mayoral candidate Luis Huang, a self-described socialist and first time Irvine candidate, have each earned approximately 9,200 votes despite the fact that Huang endorsed Khan months before the election.

In the Irvine City Council race, first-time Democratic candidate Tammy Kim has maintained a strong lead since election night, but the 2nd, 3rd and 4th place spots have shifted as the Registrar has released remaining vote counts.

With councilwoman Khan winning the mayoral race, the top two council candidates will each get four-year terms on the council, while the third place candidate will serve the two-year remainder of Khan’s term. Republican Mike Carroll, Democrat Larry Agran, and Democrat Lauren Johnson-Norris are currently within a few hundred votes of each other.  These results guarantee a shift in the partisan power balance on the council, which has been dominated by Republicans since 2012, but will now have either a 3-2 or 4-1 Democratic majority.

With thousands of votes potentially outstanding, Irvine voter participation in 2020 is 81.2% – higher than the city’s historic 80% turnout in 2016.

Registered Democrats now outnumber Republicans in Irvine by nearly 22,000, according to data from the OC Registrar of Voters, and 85.2% of Irvine Democrats have cast ballots so far in 2020 versus 82.7% of Republicans.

Irvine’s No Party Preference (NPP) voters outnumber Republicans by more than 8,300, and 77.4% of them have voted – a slightly lower percentage than Democrat and Republican partisans (see graph).  According to Pew Research, NPP/independent voting tends to lean more Democratic than Republican.