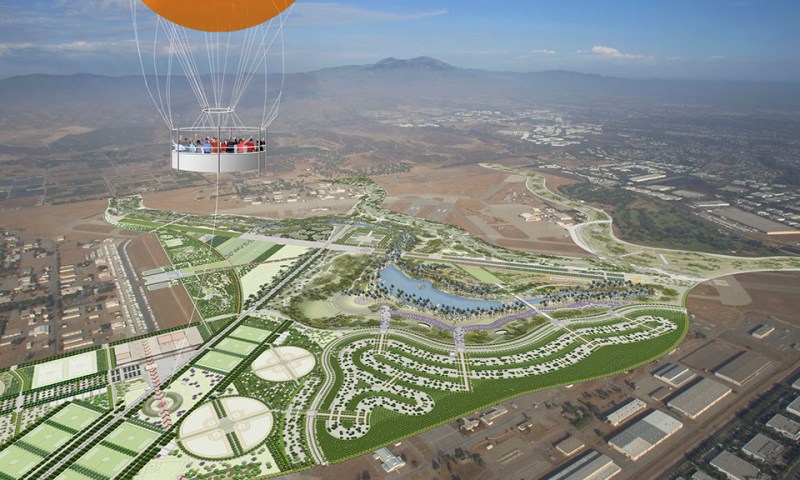 “Entitlements are legal rights conveyed by approvals from governmental entities to develop a property… . Entitlements can be a major factor in the ultimate use, viability, and value of your property.“—Urban Land Institute

In the previous article in this series, I wrote about the defeat of a commercial airport proposed in the middle of Irvine. In that article, I also wrote about the public-private partnership to which Irvine and Lennar (and later its spinoff FivePoint) committed themselves. This partnership was the agreed way forward for development of the land at the former El Toro base.  As part of this public-private partnership, Lennar/FivePoint received from the City of Irvine the pre-approval (entitlement) to build a certain number of homes and non-residential structures on this land.

In the following, we start on the journey of understanding how FivePoint’s home-building entitlement numbers increased over time.

Irvine and the Great Park Board gave the El Toro land a new name, the Orange County Great Park. FivePoint calls its development Heritage Fields. FivePoint also refers to its holdings at the Great Park as the Great Park Neighborhoods or Great Park Communities. Lennar/FivePoint’s pre-approved home-building entitlement number from the City was 3,625.

Note: Haddad recently announced that he would step down as FivePoint’s CEO.
Also, the Irvine city council recently voted to drop Orange County from the name for this area. This was in spite of an overwhelming number of public comments asking that Irvine not change the name. The vote was 4-1: Khan, Kim, Kuo, Carroll voted Yes. Agran voted No.

“PROJECT STATEMENT: The Comprehensive Master Plan for the Orange County Great Park outlines a vision for a new kind of park. Here, new ideas for social and environmental sustainability are investigated and tested, and the citizens of Orange County become key participants in imagining these new ideas to create a healthier and more sustainable future. The Great Park knits together the diverse communities and cultures of Southern California while restoring the region’s natural heritage.”⁠—ASLA 2008 Analysis and Planning Honor Award

At the August 11, 2009 Irvine city council meeting,* the Irvine city council approved a density bonus for FiveaPoint homebuilding in the Great Park.  The vote was 4-1. Four of the council members said that under the state’s bonus-density law FivePoint had the legal right to build the additional market-rate homes. The city attorney concurred with these four. However, Councilmember Shea was a dissenting vote.

Shea stated that the 5/5/5 formula had provided good results for Irvine. That being the case, Shea said that this formula should be maintained regarding building affordable housing in Irvine. In addition, Shea stated that she was concerned about the density that would result in the Great Park from providing this density bonus. She also said that this amount of density was not the original intent for the Great Park area.

Although FivePoint could have used the 5/5/5 affordable-housing formula for its project, it chose at that time to allocate 11% of its housing as very low-income. This choice triggered the California state law that allows a developer to build additional market-rate homes. The 11%-very-low-income choice gave FivePoint the entitlement to build an additional 1,269 market-rate homes in the Great Park.

Following are thoughts from some of the city council members who voted Yes on this density bonus.

Agran: Avalon Bay in the IBC also triggered a similar density bonus. So, this was not the first time this density bonus law had been used in Irvine. Also, the City of Irvine is legally bound to allow the density bonus, since it is state law.

Krom: The state did create this law to incentivize developers to build more affordable housing. And it does further Irvine’s housing goals. In addition, FivePoint committed to making all future affordable units permanently affordable. This provides an additional benefit to Irvine.

Choi: “Even though Councilmember Shea has some concerns about the higher density, this is a given right by state [to] the developer to choose within the parameters either 5/5/5 or even higher rate. For whatever reason, I’m sure, they [are] always counting the bottom line. Probably they have chosen to increase very affordable homes [that] will probably give them more financial return, I assume…. As long as the are performing within state guidelines, I cannot say no to that. So, I will be supporting today’s applicant/staff’s recommendation to approve.”