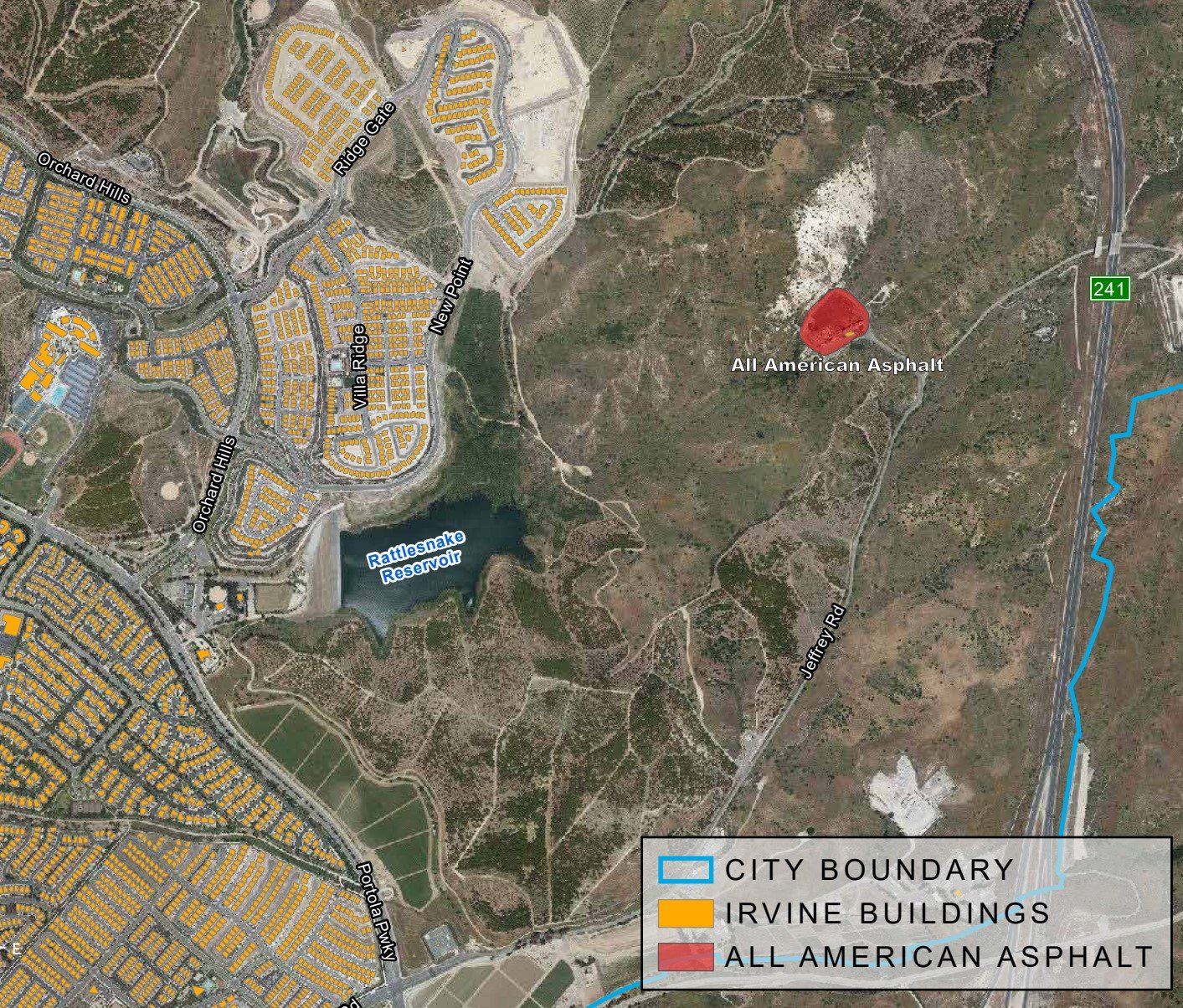 Residents of North Irvine say they are caught in a seemingly endless battle for air quality and public safety due to their proximity to the All American Asphalt factory.

Residents of the North Irvine villages of Eastwood, Stonegate, Orchard Hills, Northwood, and Northwood Pointe have been battling fumes from All American Asphalt since 2018, when they raised concerns to neighborhood homeowner associations. Since then, resident say they have made countless phone calls and emails to South Coast Air Quality Management District (SCAQMD), The Irvine Company, All American Asphalt, and the City of Irvine, but that no one is taking responsibility for resolving the issue.

Two residents groups, Stop Toxic Asphalt Pollutants and locally-based national non-profit Non-Toxic Neighborhoods, say they have jointly asked city officials for comprehensive and independent air monitoring, and that nothing has been done after months of discussion.

All American Asphalt was granted a permit to operate in 1994, and the land it was built on was annexed by the city in 2001. However, the existence and location of the asphalt factory was never included on our city maps, and new homeowners in the area say they were unaware of the factory until they smelled the fumes.

According to the Los Angeles Times, a map identifying the factory location was recently added to the city website in October. LA Times | Brazil

All American Asphalt address is 10671 Jeffrey Rd, Irvine. The distance from the factory to neighborhood villages and open-air schools is as follows:

The resident groups consulted with Non-Toxic Neighborhoods advisor, UCI Professor Emeritus of Medicine and Public Health Dean Baker, who reviewed the Scope of Work conducted by the City of Irvine’s consultant on the issue. Dr. Baker raised the following concerns:

“The documents between the City’s legal counsel and consultant seem to specify an essentially confidential process, rather than an open and transparent process.”

“The documents and scope of work largely ignore having material roles for advisors, experts, and representatives of the impacted local communities who should participate in all phases of the Scope of Work. At a minimum, community-designated persons should have a review and comment role with the City and Rutan & Tucker on all proposals, findings, and reports by the consultant. The City should provide to community representatives all work materials, such as results of the environmental monitoring and the Health Risk Analysis (HRA) data and assumptions.  This assessment should be a transparent process and not a confidential process as it is currently characterized.”

Why Is Community Input Not Required?

Scope of Work Should Be Shared With Community Representatives

“The report of Phase I site audit is to be provided to the City Attorney’s Office, but other contract provisions suggest that the report will be considered confidential. Instead, the scope of work and contract should make it clear that all materials and deliverables to the City Attorney’s office or City will be shared with the community representatives.”

“A substantially more comprehensive monitoring protocol is essential in order to assess risk from the facility. My main points are that the contract must define the process to be open and transparent with full community review at each major step. Also, the environmental monitoring protocol must be more extensive and the health risk assessment more sophisticated than just following the screening HRA for screening general facilities. It is important to make sure that the environmental monitoring and risk assessment specifically address higher sensitivity and risk among infants, children, and other vulnerable populations. As the standard HRA guidelines mention and you have mentioned, the assessment should assess possible impacts on local schools and outdoor play areas for children near the facility.”

Dr. Baker collaborated with some of his UCI colleagues to form a team of experts in Environmental Exposure Assessment, Environmental Epidemiology, Air Quality Assessment, Air Modeling, and Environmental and Public Health and independently conducted initial air quality tests – something the residents say the City and SCAQMD have yet to do.

Residents say the results were startling, including toxic pollutant levels recorded outside a home in Orchard Hills.

On November 21, 2020, the groups requested a meeting with Irvine’s current and future City Councilmembers, and city staff to present and discuss the UCI team’s findings. Release of study data is being withheld pending this meeting. The groups say they have yet to receive any meaningful action from the city.