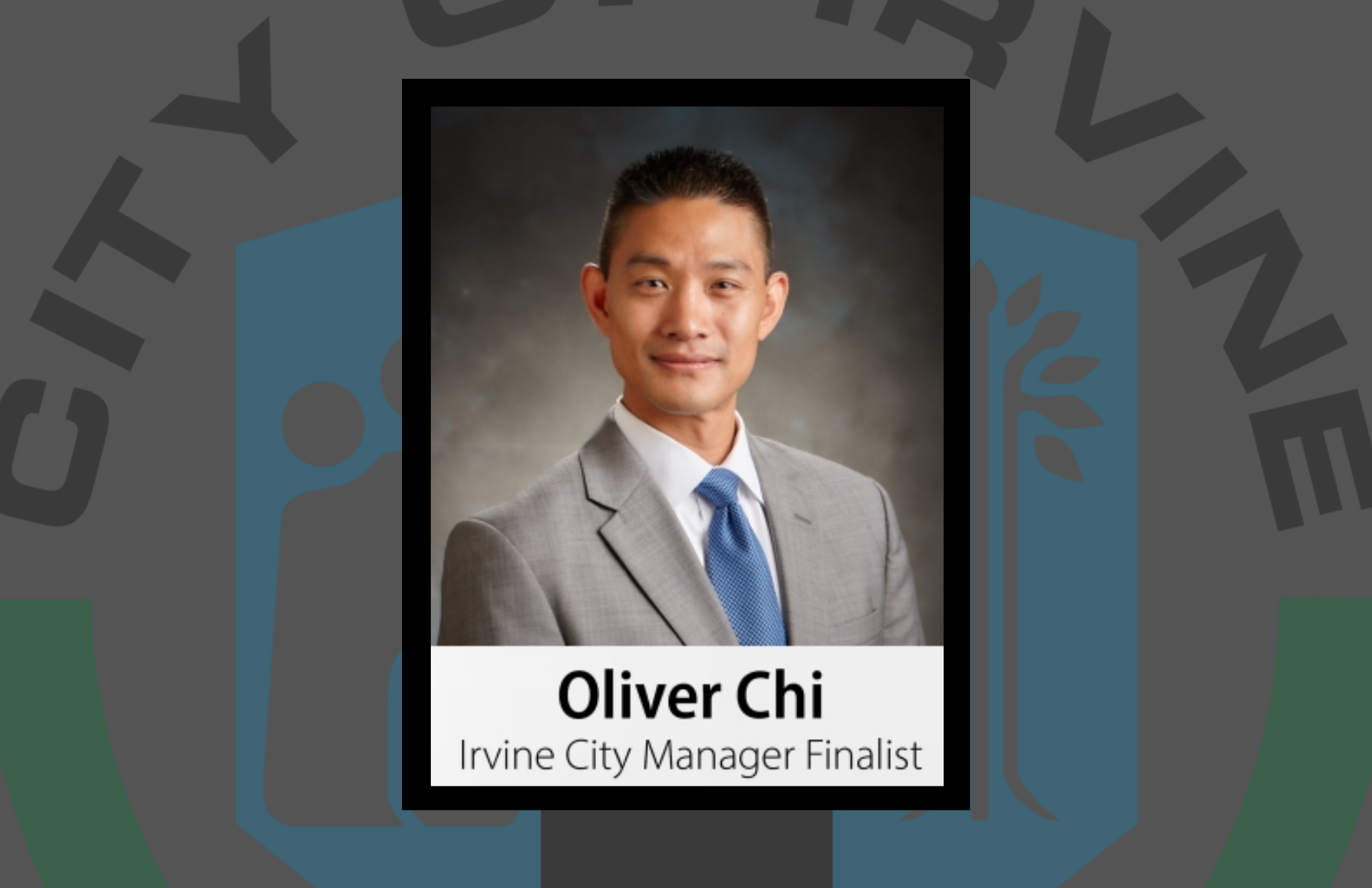 Disclaimer: The following article was received anonymously and is being published as an Opinion article as decided upon by the Irvine Watchdog Editorial Board. All references have been verified for accuracy.

On November 9th, Irvine City Council will consider appointing Oliver Chi as the 6th City Manager of the City of Irvine. If appointed, Chi will serve a two-year term with an annual salary of $301,246.

Chi is an Arcadia native, where he developed his initial leadership experience as an Eagle Scout and was Class President of Arcadia High School in 1998. Upon graduation, he studied political science at UCLA before receiving his Masters of Public Affairs at the USC.  Despite his academic and leadership experience, Chi appears to have been controversial wherever he goes, marked by an alleged lack of maturity, callousness, and a willingness to place his ambitions over the good of the communities he was tasked with serving.

Chi’s dubious track record began as Deputy City Manager for the City of Rosemead. He later became a member of the California City Management Foundation’s Board of Trustees, at the direction of the City Manager of the City of Claremont, Glenn Southard, who helped start the organization. [1] Under their combined leadership, tens of thousands of dollars in credit card bills were racked up monthly with personal charges to dining and entertainment establishments. In 2006, city officials determined that many credit card charges were not accompanied by receipts. A subcommittee directed to review these issues never met. In 2008, when more charges were incurred, the City of Claremont City Council was forced to take the public heat. [2]

As Assistant to the City Manager, Chi was also deemed most responsible for a faulty appraisal which made the City of Claremont ineligible for a $1 million grant from the State of California because the granting agency wouldn’t approve a grant for the city’s appraised value. Residents likened Chi to City Manager Southard in being intelligent, but also weak and manipulative. They expressed concerns that Chi failed to recognize the sentiments of the greater community, as he was disconnected from the needs and wishes of the majority of the town. [3]

Having only completed his postgraduate education in 2005, Chi seemed young and inexperienced when he was appointed as City Manager of the City of Rosemead in 2007 by a 3-2 vote, at the age of 27. Chi was described as a party boy by many residents of the City of Rosemead, and was a close ally of the Mayor John Tran. After Chi’s eventual resignation and subsequent move to Monrovia, a former employee of the City of Rosemead shared his experience under Chi’s amateur leadership. “I was employed there at City Hall in Rosemead while all this corruption was going on. I cannot believe the City of Monrovia and all its citizens trust this suspect who was never brought to justice. […] Just because he wasn’t convicted doesn’t mean he is innocent.” The corruption being referred to is described in detail below.

When Rosemead Mayor Tran lost his re-election bid, Chi was forced to resign as City Manager by a 4-1 vote of the newly elected Rosemead City Council. A major complaint of Chi was his failure to hire the most qualified candidates when executing an expansion of staff in the City of Rosemead. The only reason Chi was not fired was because of a provision of the City of Rosemead Municipal Code which did not permit the termination of employees in the ninety days following an election. Therefore, Chi negotiated for and accepted his resignation with the inclusion of a no-sniping clause, which precluded the City of Rosemead and Chi from speaking disparagingly of each other. [4]

Following the challenge of an unemployment claim by former Councilmember John Nunez, Rosemead closely examined what they were paying out and to whom. Chi’s claim and collection of $9,900 came as a surprise to the City of Rosemead, which thought it was done with Chi when he was paid $334,000, nearly twice his annual salary of $178,00, as a severance package under a settlement agreement made prior to his resignation. Chi returned the $9,900 in order to “maintain a good relationship with city staff and officials,” despite claiming that he had every right to collect unemployment since he resigned “under the threat of termination.” [5]

During his term, Tran solicited more than $10,000 in bribes and Chi convinced a developer to purchase a property adjacent to an office building she owned to develop a mixed-use project. Following his term, Tran pled guilty to bribery, in exchange for not being prosecuted for a felony count of attempted witness tampering by corrupt persuasion and one count of making a false statement to the FBI. Prosecutors had determined that Tran met the witness, a real estate developer, at a Starbucks and instructed her to tell a grand jury she did not meet with him or give him money. Both Tran and Chi were mentioned by name in a $1.5 million claim filed by the developer. Tran also submitted a false statement to the FBI, purporting to have not met with the real estate developer or been given money by the real estate developer. [6, 7]

Following his resignation as City Manager of the City of Rosemead, Chi found himself unable to find municipal employment for approximately two years.

Chi was introduced to the City of Barstow as one of five candidates by the executive recruiter, Bob Murray & Associates, the same entity that conducted the supposed nationwide search for a City Manager in the City of Irvine. Issues surrounding the appropriate salary for his experience and position were raised throughout his time in Barstow. Despite Barstow City Manager Curt Mitchell recommending and insisting on Chi, residents felt as though they were not getting the quality of management that they were paying for. “Barstow city hall staff is thrilled to death to see him go! He initially fooled a lot of people […] A reorganization that brought him a lot of yes men that are not qualified for the positions they were handed and it is now showing. The IT person is their human resources manager.” [8]

Upon his appointment as City Manager of the City of Monrovia, Chi stated before the City Council, “it’s certainly no secret that I had a fabulous career flop in the City of Rosemead. I can’t tell you how much I appreciate the confidence you’ve placed in me. I can’t tell you how much I appreciate that in spite of the bumps in the road in my career that you tasked me with this responsibility.” While his time in the City of Monrovia included a massive expansion in development, Chi, eager to take advantage of this fresh start, worked tirelessly for the people of Monrovia, a community of less than 40,000 people, which he had already been familiar with growing up. [9]

Despite mediocre expectations, Chi was successful in executing a public-private partnership with a ride-sharing corporation entitled GoMonrovia and establishing a working relationship with the City of Monrovia staff and the city with a routine City Manager Update Report, posted to the City of Monrovia website. The worst of Chi’s tenure was when he proposed and negotiated a slash in the salary of City of Monrovia employees to budget for the increase in pension costs. [10]

Similar to the City of Irvine, the City of Huntington Beach conducted a nationwide search to recruit their next City Manager. When Chi was selected as the Huntington Beach City Manager Finalist from an initial pool of ninety candidates, his four-year employment contract (set to expire in 2023) included a starting salary of $260,000 and $1.5 million to allow Chi and his family to move from Rancho Cucamonga to Huntington Beach. When Chi assumed the role of City Manager, he made promises to maintain and enhance the public’s trust as a city. However, many residents still believe their initial concerns remain warranted. Unfortunately, some of these concerns mirror the concerns of residents of the City of Irvine. When residents asked the members of their City Council about the troubling details of Chi’s employment history, one responded, “We don’t know about any problems in his past and we don’t pay attention to forums. We are hiring him and if it doesn’t work, we will bring someone else.” However, severance packages can be extremely expensive and significantly deter a legislative body from terminating a City Manager. [11]

Having been City Manager for just over a year, Chi oversaw the groundbreaking of a toxic site containing contaminated soil. The site was to be developed into a Navigation Center, or shelter. However, the Phase I Environmental Impact Report found that hexavalent chromium levels on the site were approximately 980 ug/kg, nearly 50 times the recommended maximum daily exposure of 20 ug/kg and a potential cause of cancer and other chronic illnesses. Chi’s negligence resulted in the exposure of much of the crew on site. With a controversial asphalt plant releasing fumes and toxins near so many Irvine homes, the lack of response provided by Chi should be worrying to many residents and their families. [12]

In October of 2020, Chi reportedly gave unwanted hugs to his former secretary, who filed a complaint with the City of Huntington Beach. While it is likely that her accusations were based in fact, Chi suggests that the secretary made these allegations and filed the complaint out of animosity after being the subject of two employee misconduct violations. Prior to any formal investigation, the secretary claimed that she faced retaliation by Chi while the City of Huntington Beach prepared to offer the secretary a settlement agreement in the form of paid leave, at a cost to taxpayers of more than $60,000, if she was willing to recant her accusations. Upon her receipt of the settlement, she tendered her resignation. However, this highlights a pattern of no-sniping clauses and settlement agreements attached to situations where Chi has been accused of wrongdoing, a form of silencing his victims. National headlines from earlier this year revealed that “we should believe women and that we have an obligation and a [duty to] protect women in their workplace.”

Both of these instances demonstrate that Chi fostered a toxic and hostile work environment. During these turbulent events, two police chiefs announced their departures in a little more than a week. When asked during an interview about his role in all of these incidents, Chi denied any wrongdoing and claimed that this was the work of political opponents who were trying to sabotage him, which makes one wonder. As an appointed City Manager who had moved from Rancho Cucamonga and had served in this capacity for less than a year, who exactly were his political opponents?  [14]

Most recently, the Huntington Beach Finance Commission wanted to meet in August to scrutinize a major purchase agreement made by the City of Huntington Beach before the deal was formally closed. Chi prevented the meeting from being called to order by excusing himself, as “he was going on vacation.” As a result, the deal closed with no oversight. As the City of Irvine is entrusted with an annual budget of over $200 million, such disregard for stewardship of taxpayer dollars could make the City of Irvine very vulnerable to abuse. [15]

Voice Your Thoughts this Tuesday

If you too are concerned about Chi’s consideration as City Manager of the City of Irvine, submit an eComment HERE or attend the City Council meeting on Tuesday, November 9th.