Traffic Still an Issue Despite Investments in Data & Technology 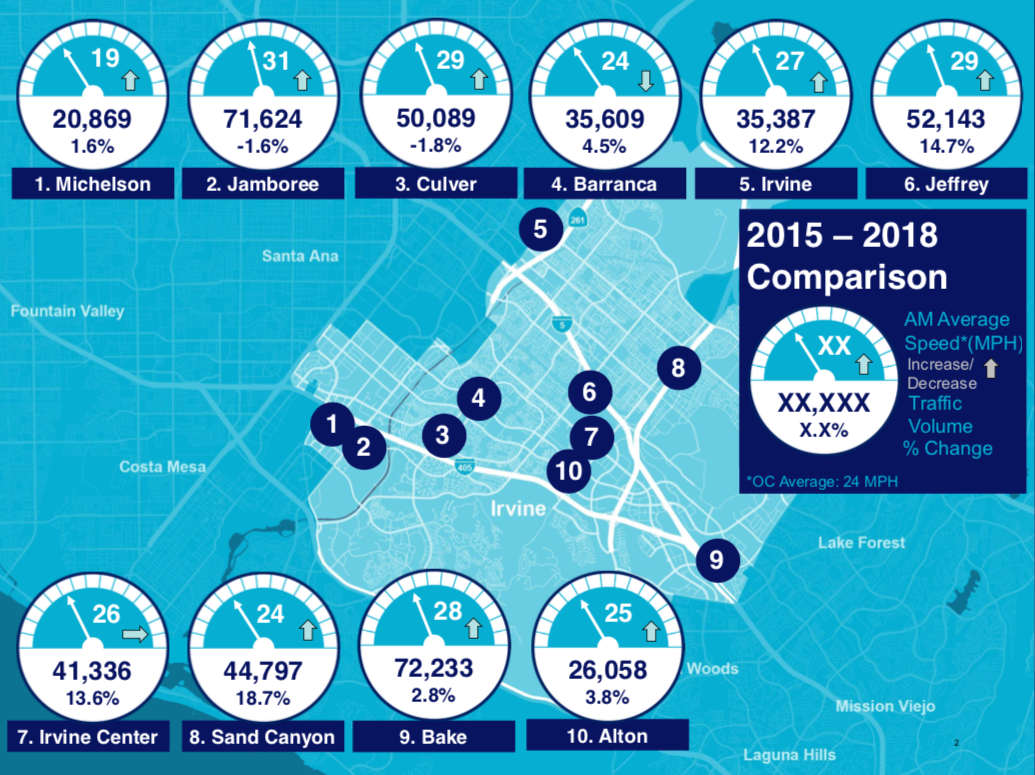 Labor Day weekend is one of the worst travel periods for Americans and it got us thinking about the traffic on the roads in Irvine and how transportation is the largest contributor to greenhouse gas emissions. How can we be more efficient and get more cars off the road?

Based on city data that was collected in the spring of 2018 the daily vehicle trips on 10 major corridors show a 6% increase.

It’s important to note that the decreases in volume on Jamboree and Culver are misleading. Jamboree is down because drivers are taking Michelson instead and traffic on Culver Drive has been decreasing because Jeffrey Road is the new preferred route. Thanks to data analytics we also know the trip origins and destinations of the traffic. 82% of the traffic stays in Irvine.


Data and technology are playing a much bigger role in transportation decisions. Irvine is continuing to invest in synchronizing intersections and is also piloting a software driven technology on Portola Parkway for adaptive signalization. Adaptive signals are valuable on corridors that fluctuate a lot. Real-time dynamic signal changes are made using a detection system to analyze data to change cycle lengths. But what are some ways we can reduce cars? Our neighbors in LA are trying.

LA Metro bus ridership is declining sharply in part because of long bus rides so they are trying to restructure the bus system to make it faster and more frequent in addition to looking at more dedicated bus lanes and congestion pricing to get more cars off the road. [Hymon|TheSource]

The issue of traffic is a hot button! It gets even hotter during election time. Below are three groups that help ease traffic congestion in the city.

The Orange County Transportation Authority has bus routes serving the Irvine community. OCTA is seeing its lowest ever ridership numbers. To see the bus routes click here. I went to give the OC bus a try but found the schedule confusing and I would have to make several bus changes for a simple trip. The cost is $5/day pass, $2/one way ticket, $1.50/senior one way ticket.

This is a weekday commuter shuttle for morning and evening peak hour service. Fixed routes serve incoming and outgoing commuters originating from the Tustin and Irvine train stations. It’s operated by the OCTA, funded by the city of Irvine and supplemented with 10% funding from several business partners. The majority of riders (96%) live outside of Irvine and take the shuttle for several miles to their work destination.

Anteater Express operates with a fleet of 20 electric buses. Routes are both on and off UCI campus to serve students, faculty, and staff. Daily ridership during the academic year is 14,000 people.

Irvine is a growing city. Our resident population and daytime work population is increasing. Parking structures and surface lots for 1,895, 550, and 500 cars have been approved with more planned. Let’s start  identifying serious alternatives to reduce cars in Irvine and try them out.

Bicycle and Pedestrian Trails to Connect Mountains to the Sea

Irvine is Looking to Improve Mobility, Congestion Relief and Various Options for Transit. Transportation Commission to Weigh In and So Should You!