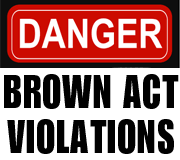 On July 10th, there was a hotly contested City Council meeting to discuss the much publicized motion by Councilman Lalloway regarding the use of the ARDA site for the veterans cemetery given the resounding defeat of Measure B by the vast majority of Irvine residents.  In another display of complete disrespect by our Council, Mayor Wagner put forward a 6 point motion.  Did he construct this motion right there on the dais?  No.  It was typed up and ready to go.  Did he present this option for review by the public in accordance with the Brown Act? No. Let’s examine the timing.

MOTION BY WAGNER
On July 10, 2018, Wagner introduced his motion from the dias at the City Council meeting, which was a 6-point motion with detailed sub-requirements for each point. The public was not given the opportunity to see the motion and thus could not comment on the motion in public hearing.
Is this a Brown Act Violation? This is a standard operating procedure for the Wagner, Shea, Fox majority. NO TRANSPARENCY.
See the picture below of Wagner’s motion taken just after the meeting.  Why wasn’t this posted in advance? How come Shea and Fox were so eager to vote for this?  Did they have advanced knowledge?

And the $64,000 question: Why wasn’t the option of the Golf course put forward a year ago instead of delaying the cemetery for yet another year.
BROWN ACT VIOLATIONS?
Documents at meetings are meant to be public and posted in advance.  Given the detailed sub-bullets, the Irvine Watchdog would LOVE TO KNOW WHO DRAFTED THE MOTION.  Is the City Attorney complicit in this Brown Act violation as well?
We are certain that these questions will also be met with deafening silence from our elected officials.