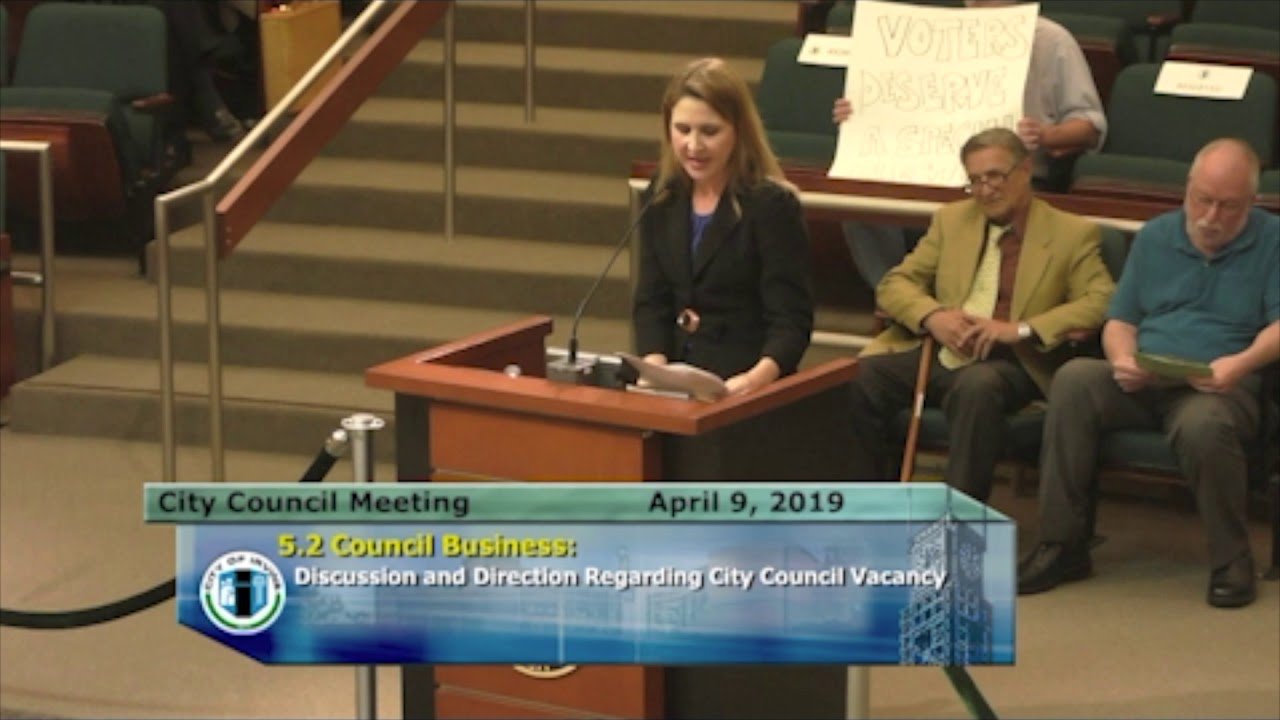 On April 9, we heard from several public speakers in a packed Chamber regarding appointment v. special election to fill the fifth city council seat. The speakers included four potential candidates for the vacancy. Here are their public comments (listed in order of appearance):

“The election of November 2018 was just a few months ago… among the 12 candidates running for city council in November, I was the first runner up with over 19,000 votes, just 1% behind the elected position.”

“Measure A, adopted in 1991 by the Irvine voters, which is now our city law, states that if a council member in an unexpired term is elected to the office mayor, the candidate with third highest number of votes in that election shall fill the vacant seat for the remainder of the term.”

“Since the passage of Measure A in 1991, there have been three instances in 2000, 2004, and 2008, where the candidate coming in third has become the council member to fill the vacancy.”

“The easiest way to steal an election is to not have one at all.”

“What is at stake is the legitimacy of this city’s government which would be greatly undermined should you act carelessly as custodians of that power.”

“I think we’d all like to know who [choice voting] was crafted by, was it Martin Chapman or some special interest?”

” ‘We are not sure who the author and the sponsor of this selection process that was recommended is?’ Well, I decided to find out. I placed a telephone call… to the assistant city clerk and asked him where he got this choice voting system from… and he pointed me to Martin & Chapman Election Handbook that provides instructions to carry out a successful city council vacancy appointment.”

“Martin & Chapman was established in 1956… leader in the election industry… [serves] almost all of the 482 cities in the state of California…  is the go-to guide. Smokey, political, back room deals? I don’t think so. This is not a scheme, it’s been used all over the state.”

“What is at stake is the nearly million dollars… for a seat that will only sit for approximately 12 months. That is nearly $100k per month we would spend to put this person in this seat.”

“Listening here today, this conversation has been strictly down party lines.”

“This is supposed to be a nonpartisan seat, the seat is supposed to be an advocate of all of Irvine, all of its citizens, and if we are thinking about all of our citizens, we certainly should not be entertaining the expenditure of almost a million dollars at a time when our city is facing a deficit.”

The City Council is accepting applications for the vacant city council seat. Click HERE for the application, which is due May 5 at 5pm. If the City Council cannot come to a consensus, we will have a special election.

What are your thoughts?