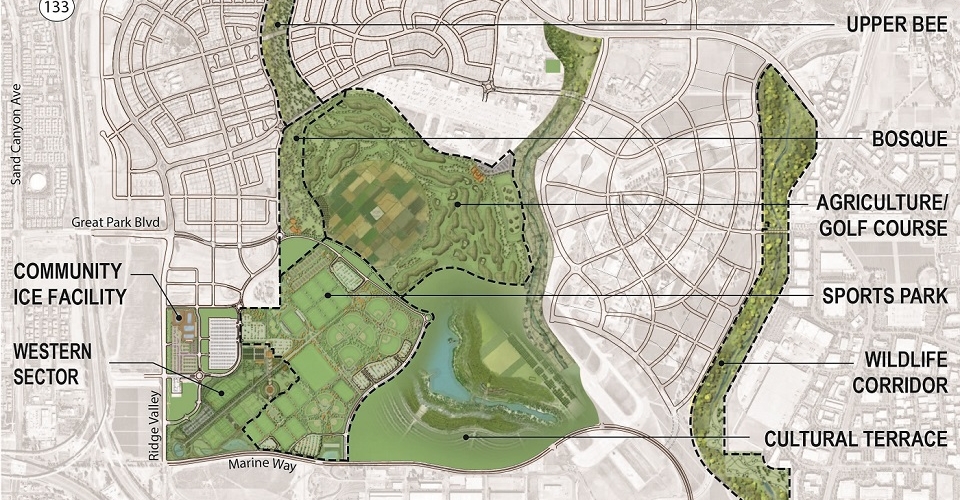 We’ve all heard the stories about the mismanagement and poor planning from the early days of the Great Park project. And more recently, we are hearing about the milestones being reached.

Anyone who has recently visited the Park can attest that there is much work ongoing, and headway is being made. However, residents appropriately have several questions: “What’s FivePoint responsible for?” and “What are the benefits to Irvine residents from these milestones?” and “Where does the city stand in building out the Cultural Terrace?” Here is what we know so far…

City-FivePoint development agreement: Approved in 2013, FivePoint offered to build part of the Great Park in exchange for the city nearly doubling the number of homes that would be built. More specifically, by allowing 4,500 additional housing entitlements in the Great Park neighborhood, the city is benefiting from the expedited development of the 688 acres of city-owned parkland. This agreement is referenced as ALA II – the Second Adjacent Landowner’s Agreement between the city of Irvine and FivePoint. (The 300+ page document of this agreement is available on the city website.)

Basically, the ALA II public-private agreement has FivePoint overseeing the construction and funding of the 688 multi-use acres with the city responsible for the operation and maintenance. The agreement officially began in October 2014 and is a five-year development deal.

The projects planned for in the 688-acre development design package are the following (http://www.cityofirvine.org/orange-county-great-park/688-acres-great-park):

While it has been reported the value of this deal to the city could be upwards of $200 million dollars, the city has no way of knowing what has been spent. Why? Because – per the agreement – FivePoint does not have to disclose this until after the project is completed in October 2019!  So much for transparency!

Although this public-private partnership is using no city money from the General Fund, the lack of transparency is concerning. The benefit to FivePoint is clear: they will have close to 10,000 homes in the surrounding Great Park neighborhood when all is done. But city residents have no idea of this deal’s real-time benefit for them nor what is being spent on their behalf. To see whether the current deal is a good one for Irvine’s residents, we need to know the rewards and potential risks.

For the golf course complex mentioned above, Councilmembers Fox and Shea have requested city staff to review this site for the Veterans cemetery and scale back the course. But we do not know how they plan to amend the legally binding agreement entered into by the city in 2013, or what will come of their plan – there are a lot of major components that are not clear.

Cultural Terrace Update: The Cultural Terrace is the 223 acres of city-owned land that is included in the Great Park master plan. “Possible” future amenities range from various museums, a central library, permanent amphitheater, BMX bike facility, botanical garden, shared space for non-profit organizations etc. At this point, residents have identified many projects for consideration. Projects in the cultural terrace will be built with third-party partnerships. This May, the city hired a senior consultant advisory firm to advise and oversee the cultural terrace planning. Hopefully, this consultant has an orderly and transparent process in place, as their scope of work is for developing both a business plan and tenant planning services.

In summary, by looking at what is going on in the Great Park, we need greater transparency on several things. Among them, what is stated in the City-Five Point development agreement – how much are Irvine residents gaining? Also, is it easy to just swap a golf course for a cemetery? If such a swap is easy, it is not apparent in the language of the deal.

These are just two of the questions the Watchdog has been asking. The Great Park board meetings are held the 4th Tuesday of every month in City Hall, where the director gives a monthly executive summary. The agenda and meeting minutes are posted on the city website.

Thank you for your attention. Your interest and participation are valuable and greatly appreciated.