Opinion: Which Irvine City Councilmembers Should be Able to Place an Item on the Council Agenda? 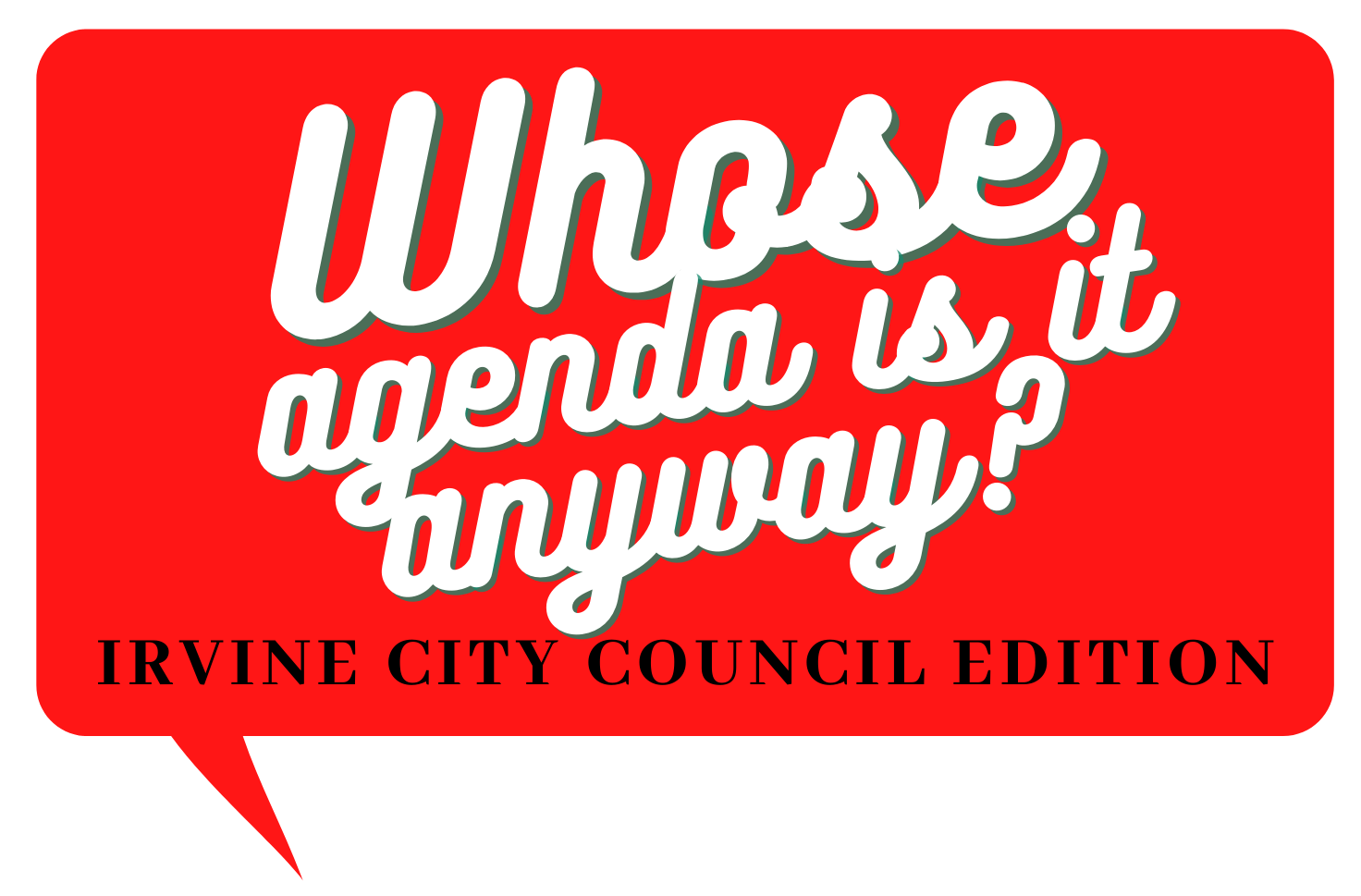 Q.  Which Irvine City Councilmembers should be able to place an item on the council agenda?
A.  Any of them.

Irvine Mayor-elect Farrah Khan recently posted a video on Facebook explaining why she thinks Irvine needs to keep a policy requiring two city council members together or the mayor alone, to sign off on adding an item on the city’s business meeting agenda for discussion.

In her video, Khan says the policy is needed for two reasons:

However, there are a host of problems with the policy.

The outgoing council created the policy initiated by Mayor Christina Shea and Vice Mayor Mike Carroll, as a temporary measure in 2019 to prevent council members from using the council dais to “grandstand”. That rule is set to expire in January 2021.

Instead of allowing this policy to sunset, it was scheduled for discussion and a vote at the November 24 city council meeting by Councilmembers Khan and Anthony Kuo. However, Khan requested the item be continued to the December 8 Council meeting (agenda item 4.2) following the swearing-in of the new mayor and city councilmembers.

Thirty-two public e-Comments were received regarding the item, with the overwhelming majority in opposition to the policy.

In her video, Khan asked for feedback from Irvine residents, so here’s my feedback on the problems with this policy:

Gives the mayor more power than the councilmembers

The policy would serve to create the potential for exclusion of one councilmember which sets a dangerous precedent.

Makes It More Difficult for Resident To Be Heard

We must empower grassroots communities by giving them a voice equal to that of the powerful interests in the city. Requiring 2 councilmembers to place an item on the agenda has the potential of preventing community members from having a  public hearing on their issues of concern thereby excluding them from Irvine’s decision making process.

Khan, known for years as a leader in the Interfaith Community, has long espoused the concept of diversity and inclusion. Irvine has become a safe place where members of our diverse population, with interests and concerns specific to their community group are welcomed, included, and encouraged to participate in Irvine’s community activities as well as in Irvine’s decision making process.

This policy has the potential of preventing councilmembers from placing items on agendas that relate to issues of concern specific to members of our diverse community groups. This policy is antithetical to the concept of diversity and inclusion.

Brown Act may prevent councilmembers from obtaining a second

The Brown Act requires that discussion by a majority of the members of a decision-making body (three in Irvine’s City council) take place in a lawful public business meeting. Government Code Section 54952.2(b)(1)

As no more than two council members can discuss a city issue without violating the Brown Act, council members who agree not to support agenda items presented by a particular colleague can prevent that colleague from placing an item on a business meeting agenda that is of concern to them and to members of the public with whom he or she had been communicating thereby preventing them from having their concerns addressed. Thus, the proposed agenda setting policy is not likely to create camaraderie or cooperation between council members.

Creating a unified, cooperative, and balanced city council by modeling the diversity and inclusion concept

Instead, Mayor Khan or two city council members could create a policy proposal that would allow all city council members the ability to place items on city agendas but with limitations to the number of items that can be submitted per meeting. This policy would serve to maintain a balanced city council with each member having equal powers and responsibilities in the decision making process.

An inclusionary policy will not serve to exclude council members from placing items on the agenda, it will not exclude members of the public from having their concerns addressed by the city council or Great Park Board of Directors, nor will it create the risk of violating the provisions of the Brown Act.

I sincerely hope that our new mayor and city council vote to support the concept of inclusion, rather than exclusion, and thus vote for a balanced city council whereby all five members have equal power to place items on city business meetings agendas and each perform their functions with respectful cooperation and camaraderie.