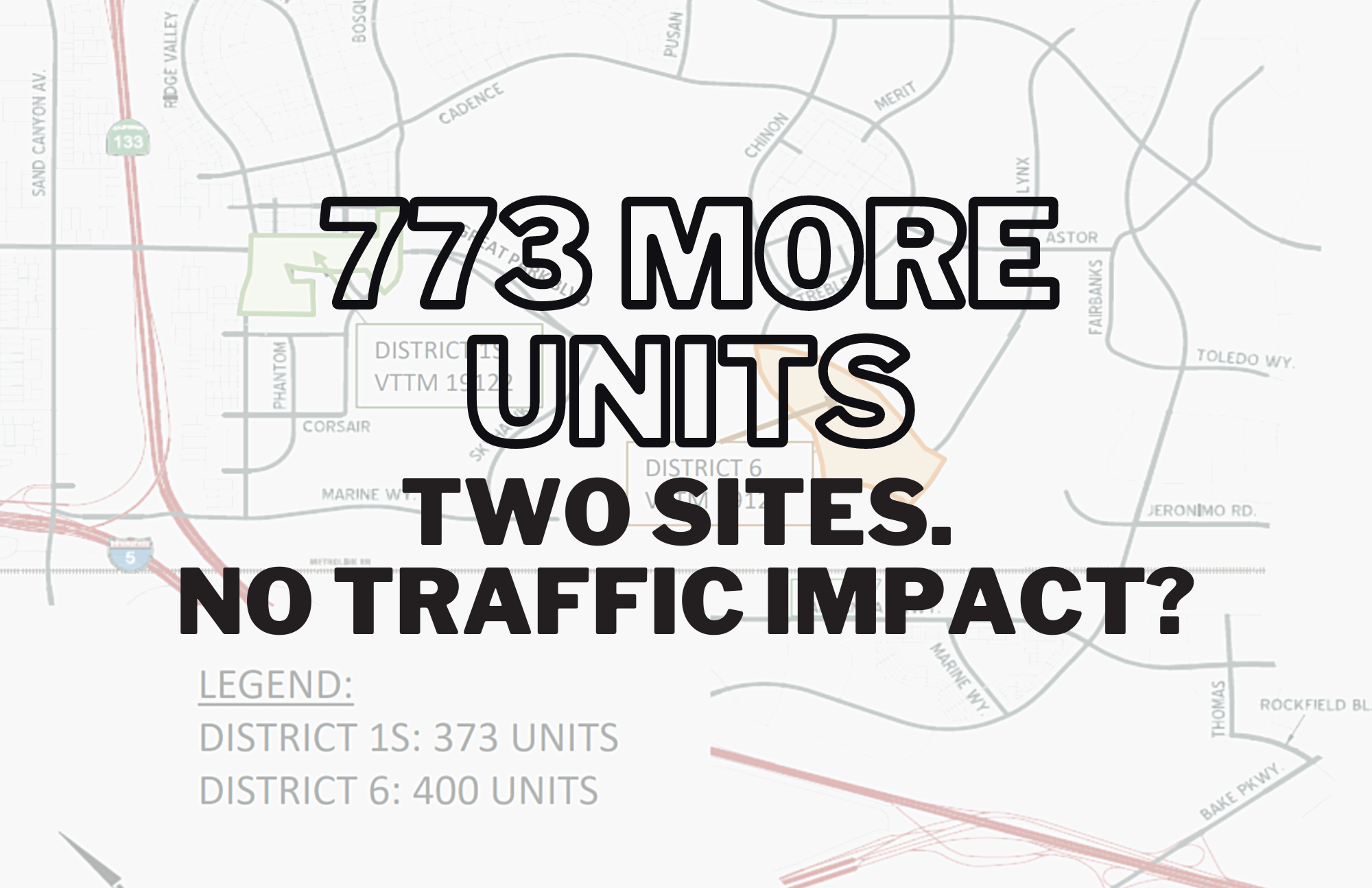 The Irvine Transportation Commission will hold a special meeting in the City Council Chamber at 5:30 p.m. on Tuesday, June 29, to vote on approval of a study minimizing traffic impacts of nearly 800 future condominium units proposed by FivePoint for the Great Park Neighborhoods. Public comments may be made in person, via Zoom, or by e-Comment. Instructions for commenting are posted here.

The City’s Public Works and Transportation staff are recommending that the Commission determine that a 165-page Traffic Impact Analysis “is consistent with the City’s adopted performance criteria, thresholds of significance, and General Plan standards.” Staff further recommends that the Commission provide input regarding a proposed extension of Great Park Boulevard between Skyhawk and Tremble streets.

This suggests that sometime after the June 15 meeting, a decision was made to conduct a special meeting to expedite the approval process for FivePoint’s projects.

Had the Traffic Commission put the Traffic Study on the agenda for its July 6 regular meeting, the Planning Commission would have been unable to grant its approvals until after that date.

District 1S – The first tract in question, Vesting Tentative Tract Map (VTTM) 19122, consists of about 27 acres bounded by Carmine and existing residential units to the north, Ridge Valley to the west, Hornet to the south, and Bosque to the east. FivePoint proposes development of up to 373 residential condos and a retail/multi-use development on the land. Access to the tract is via Ridge Valley, Great Park Boulevard, Beacon and Bosque–all existing public streets.

District 6 – The second tract, VTTM 19121, consisting of about 69 acres, is bounded by the Great Park to the north, the Great Park Wildlife Corridor to the south, future “O” Street to the east, and future Marine Way to the West. FivePoint proposes development of up to 400 condos and a private park on the land. Additionally, there would be a water quality basin owned and maintained by Irvine Ranch Water District. Access to the tract is via Chinon, Treble, Merit and Lynx—all existing public streets. Future public streets providing access would include “O” Street and “A” Street.

As summarized by in the staff report to the Transportation Commission, the Traffic Study found that the proposed development “does not require improvements at intersections and arterial roadway segments to address levels of service (LOS) deficiencies. Additionally, the proposed project does not cause traffic to exceed adopted improvement thresholds on mainline freeway segments and ramps included in the study area.” The report goes on to state:

“The project is anticipated to generate 5,527 daily trips, 526 a.m. peak hour trips, and 510 p.m. peak hour trips. These dwelling units were previously approved under General Plan build-out conditions as part of the 2012 General Plan Amendment and Zone Change and the Great Park Neighborhoods Additive Analysis; therefore, a build-out analysis to assess LOS deficiencies is not required.”

The study area was defined to include essentially all of Irvine north of Interstate 5, and areas east of Culver Drive and south of Interstate 5. The Traffic Study concluded that the proposed development does not necessitate traffic improvements to address LOS deficiencies at intersections or roadways within that area.

The Traffic Study also found that the proposed half-mile extension of Great Park Boulevard would not pose undue impacts. As stated in the staff report:

“The findings of the analysis indicate that the potential roadway network connection results in acceptable LOS for both the short-term and build-out conditions within the study area. While the connection would provide an alternative to parallel east-west routes of Marine Way and Irvine Boulevard, it would also result in additional traffic through the Great Park (an estimated 14,000 to 16,500 vehicles per day).

“The redistribution of traffic resulting from the connection was also considered as part of a TG operational analysis. The results indicated that with the Great Park Boulevard connection, the following roadway improvement modifications would be required:

“Improvements related to the Great Park Boulevard extension would be reviewed in detail by City staff through the City’s street improvement plan process.”

The agenda, Traffic Study, staff report and other documents for the June 29 special meeting can be found here.