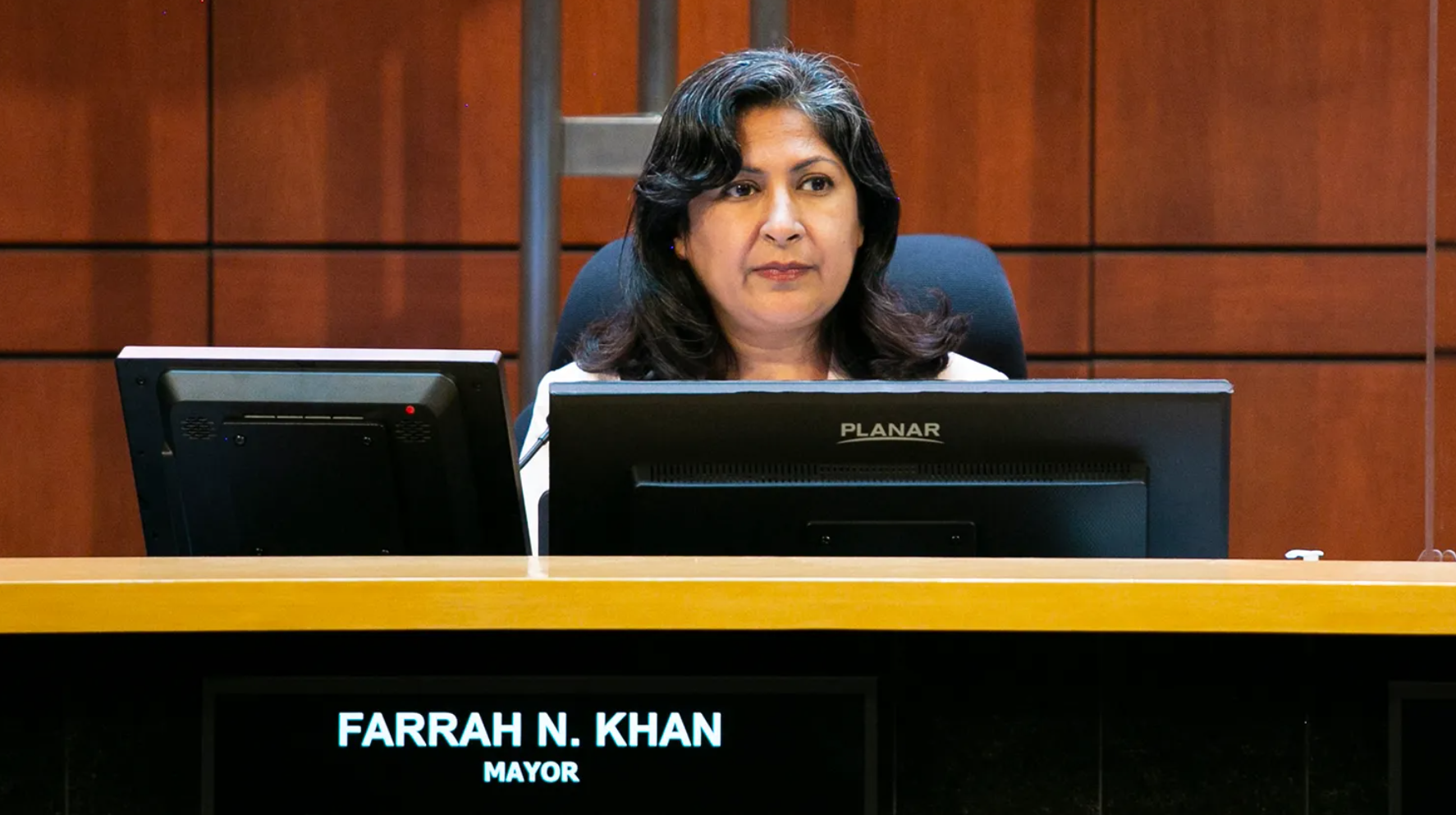 Irvine City Councilmembers are set to discuss asking city voters if they want to cut back the mayor’s power in the next election, potentially changing the position to a more ceremonial role.

Currently, Irvine residents vote separately for the city council and mayor, with council members running for four-year terms, while the mayor comes back to the ballot every two years.

While the mayor has the same voting power as their colleagues, they also have other privileges like being able to place any item on the agenda without the support of a second council member.

But some council members are hoping to see that change.

The item was brought forward by Councilmembers Tammy Kim and Mike Carroll, who have traditionally been political allies of Mayor Farrah Khan, frequently voting together on a wide variety of issues.

Kim and Carroll also brought forward an item this week that would negate the mayor’s power to unilaterally approve agenda items, making it so any councilmember could bring an item forward for discussion, but they would need a second member’s support to vote on anything.

When asked about the two items, Kim said she and Carroll had agreed to a trade where he would support a discussion on the agendizing issue if she supported his discussion to change mayor to an appointed position.

“I need a second for that, he asked me to be his second for the rotational mayor,” Kim said in a phone interview. “Right now I’m not convinced of anything, but what I am convinced of is it’s worth having a discussion.”

In a statement, Carroll said he hoped the change would “depoliticize,” the mayor’s office and specifically pointed to the controversy currently surrounding former Anaheim Mayor Harry Sidhu as a reason to do it.

“Given the recent events in Anaheim, it removes the illusion that the mayor runs or controls the city, or has more power than any of the other council members,” Carroll wrote. “It ensures that the mayor will have local government experience as a councilmember before serving as mayor.”

Sidhu resigned last month after revelations of an FBI corruption probe in a court affidavit, with agents alleging he worked alongside a cadre of special interests to exert influence over city policy making.

Khan did not respond to a request for comment Wednesday.

Next week, the council will vote on whether or not to ask voters if they think the mayor should be directly elected or appointed by the city council, the way it is in many other smaller cities throughout Orange County.

Under that system, voters elect council members, who then choose a mayor among themselves for a one-year term along with a vice mayor, who generally takes over as mayor the following year.

In cities with that system, the mayor generally doesn’t have any extra powers compared to fellow councilmembers, with their job simply being to run city council meetings.

If Irvine were to get rid of their directly elected mayor, the position would be replaced with another council seat, meaning residents would still have the same number of officials at the dais.

The change in representation wouldn’t come into effect until 2024, but if it is approved by the voters [in the November 2022 election] the shift would go into effect in 2022, with the winner of the mayoral election instead becoming a council member.

The decision would ultimately be up to voters on the November ballot, and if approved would make Irvine the largest city in the county without a directly elected mayor.

While there have been ongoing discussions to repeal the two-council member agenda setting requirement  for years, mostly from Councilman Larry Agran, Kim said she wanted to hold off bringing it for a vote until there was a chance it could pass.

“One could argue well Larry could’ve seconded, but you have to do the math. My goal is to get to three,” Kim said. “But again, this is by no means a commitment to a vote. This is an agreement to put it on the agenda for a discussion.”

The Irvine City Council meets at 2 p.m. next Tuesday, and their meeting can be viewed here.

Noah Biesiada is a Voice of OC Reporter and corps member with Report for America, a GroundTruth initiative. Contact him at nbiesiada@voiceofoc.org or on Twitter @NBiesiada.

The City Council Special Meeting re status update on the Orange County Power Authority is set for 2:00PM.

The Great Park Board Meeting is set for 3:00PM.

For information on how to participate in either meeting go to the city’s website here.